Doing it together in Public: Group Dancing and Excercise in South-East Asia

She set a portable stereo on the pavement and immediately a crowd began to gather. I watched as the shapely woman in spandex led her followers in a fast paced dance routine that got everyone sweating.

Phom Penh’s waterfront walkway near the Royal Palace was the stage for dozens of groups performing their routines, practicing their acts, and perfecting their bodies. All along the parkway groups were engaged in coordinated physical activities. There were people doing jazzercise routines, disco dancing, and ballroom dancers in gowns and tuxedos. There were teams playing badminton, aerobic work-outs, dozens of men and women doing jumping jacks and push-ups, and others doing Tai Chi and yoga moves. 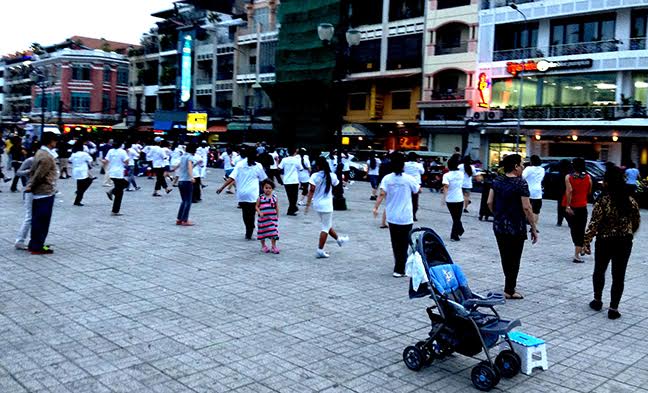 I found similar scenes in Ho Chi Minh City in Vietnam, in Bangkok and Chiang Mai, Thailand and in other cities of Cambodia. Most often it happened in the large riverfront parks where there is lots of flat paved space and grassy lawns, but the same thing happens in even the smallest city parks where there’s only room for a handful of people.

Most of the action is early in the morning and late afternoons and evenings when thetemperature cools enough to get physical. These are also the hours before and after the working day and many Asians like to wind down from the office or wind up before work. Perhaps it’s a reflection of national character or cultural evolution, or maybe the Oriental propensity towards outdoor group activity is a result of the urban planning. Whatever thereason, it is fun on a grand scale.

In China they call it square dancing (referring to the plaza or public space). One hundred million Chinese participate in square dancing. It has been going on since ancient times. Under the Song Dynasty plazas were created specifically for group activities. During the Cultural Revolution the government encouraged group performances of traditional folk dances that were modified as propaganda glorifying the proletariat. 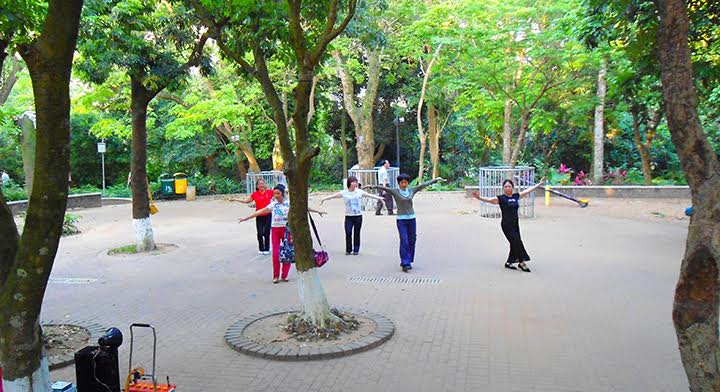 Similar movements occurred during the early days of unified Vietnam. Today in Saigon’s Le Van Tam Park groups of young people work out on the apparatus performing synchronized pull-ups, chin-ups, etc. The “Street Work-out” trend has swept the nation and many city parks in Vietnam include exercise equipment, weights, running threads, etc., made of heavy metal to endure the hardest use of thousands of people.

In Phnom Penh, Cambodia the annual Dansz Roam festival in February uses parks and plazas as stages for displays of every form of dance from traditional Apsara dancing to modern interpretive jazz and hip hop. Dance leaders are from best dance troupes and the public eagerly joins in.

The sight of dozens of people sweating in unison is initially startling and disorienting. It seems a sacrifice of privacy and individualism, but it soon becomes an amusing part of the scenery. I eventually got over my Western sense of individual space and joined in the action. A smiling young man held out a badminton racquet with the handle towards me.

“Come play,” he invited. I joined in taking turns in a fast switch badminton game involving a dozen of players. Each of us had the racket only until our first missed shot and then we took our turns in line to begin the rotation again. I never found out if our side won or lost, and I don’t think competition was really the point. It was about participation and unity. As I walked back towards my guesthouse I finally felt I was part of the thronging rush hour crowds, and the city seemed less foreign and less lonely.

Born in The Hague, Andrew Kolasinski arrived in Canada as a small child riding in the luggage rack of a DC-7. Since then he has felt at home anywhere. As the publisher and editor of Island Angler, Andrew spends half the year fishing for salmon and trout, and in the off-season he travels the world looking for a story. This article was written on behalf of Tucan Travel, experts in adventure tours all over Southeast Asia.