A refreshing mist cooled my face as I labored with the pedals to conquer a summit of the Andes. It was, relatively speaking, a gentle summit, more of a rise or slope than a mountain, but for me it was a small victory.

The last time I had ridden a bicycle they hadn’t invented shifting gears, hand brakes or inflatable tires, still I remembered it was easier.

From Baños, an Ecuadorian mountain resort city, La Ruta de Cascadas (The Route of Waterfalls) follows 20 kilometers of spectacular scenery. In that distance there are dozens of waterfalls of all sizes and shapes, some of them actually tumbling onto the roadway, others falling over the edge of the river valley that the route follows, still others passing under the bridges. The eponymous route is true to its name. There is no shortage of spectacular waterfalls. Other claims about the ride are less accurate. 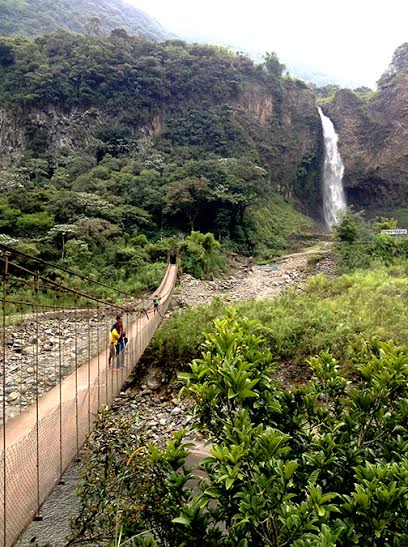 At the next bend in the road I gripped the handlebars and said a silent prayer as a transport truck came roaring up behind me, blaring his horn.

Everyone who talked about La Ruta de las Cascadas assured me that it was a bicycles-only road. In fact most of the route is along the shoulder of the highway. There are a few bypasses beside the tunnels. These are the old roadway, surfaced with cobbles, and prepared to allow cyclists to avoid going through the tunnels which cut through the mountains in several places. The first of these tunnels has no bypass forcing cyclists to ride a hundred meters in the dark narrow passage only inches from fast moving cars, trucks and buses. Maybe Ecuadorians have different standards of what constitutes a bicycles-only road.

The shoulder of the highway is marked at regular intervals with painted bicycle graphics. Most of the drivers kept their distance, but it is a busy highway along a narrow twisty route and each year a couple of cyclists are struck by vehicles. Be fully alert to the risks of the road.

The other untruth perpetuated by everyone in Baños is that La Ruta de las Cascadas is entirely downhill. It tends downward, but there are certainly hills to climb, so if like me, you have not peddled a bike in many years, be prepared to put out some effort. It took me just over two and a half hours to complete the ride; the average for experienced cyclists is two hours.

It is one of Baños’ principal tourist activities and a good source of income for many businesses including the tour companies who rent bicycles, and the restaurants, zip line, and cable car operators, etc, along the route. It is as though the whole city is conspiring to whitewash the shortcomings and dangers of the route.

With those grievances aired I would not hesitate to repeat the experience. The scenery is breathtaking. The number of waterfalls is difficult to estimate; it depends of the amount of rain and run-off from the mountains. Some cascades thin to barely a trickle in dry spells. 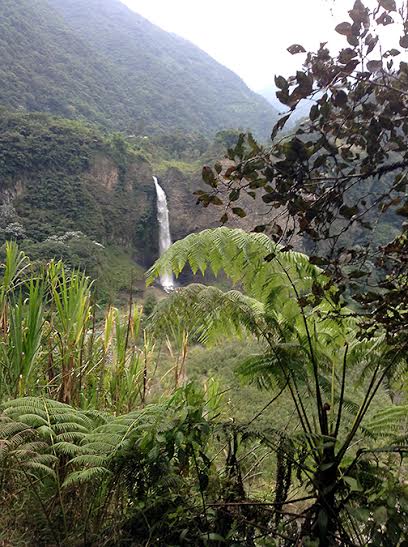 The other attractions of the route include cable cars across the valley at Agoyan at Monto de Novia and at San Pedro. There are also zip line rides, bungee jumping, and catch your own trout restaurants.

The town of Rio Negro is the end of the line for most cyclists though the route can take you all the way to Puyo. At Rio Negro and the other stopping points, fleets of trucks await tired cyclists, ready to drive you and your rented bicycle back to Baños for three or four dollars.

Born in The Hague, Andrew Kolasinski arrived in Canada as a small child riding in the luggage rack of a DC-7. Since then he has felt at home anywhere. As the publisher and editor of Island Angler, Andrew spends half the year fishing for salmon and trout, and in the off-season he travels the world looking for a story. This article was written on behalf of Tucan Travel, experts in adventure tours to Ecuador and all over South America.