Crossing the border from Thailand into The Kingdom of Cambodia I am struck by how unfair it is to lump the countries that make up my travel agenda under the label ‘South East Asia,’ as though they will all just be slightly different shades of the same colour. The feel is already different, a simmering potential not quite achieved and hindered by varying economic, social and environmental pressures, but exciting at the same time.

People spill out from all around, the markets and merchants flogging their wares, the locals crossing with purpose and agendas, the tourists looking bewildered.The no man’s land that separates Thailand from Cambodia (Aranyaprathet/Poipet) is lined with casinos that are both dilapidated and garish. Illegal in Thailand the men (and it is men) flock to punt their Baht and return home poorer.

We visit in November which means that the rain season is over but the temperature has not dropped yet. By drop, we are talking to the plummeting depths of around 20 degrees Celsius. Rivers are full but not flowing fast and the still surface creates a mirror to serve as another lens on the tall trees and dappled leaves that line the streets and rivers. Water is key to the Cambodian life. All along the banks boys and men can be seen throwing their nets into the silty water to catch snakefish, the white chunky fish that is central to that most delicious of Cambodian dishes, amok, a rich coconut, lemongrass, ginger and tumeric curry.

The first stop, where we indulge in said curry at least once or twice, is Siam Reap. Siam Reap us the tourist centre, a bizarre bazaar of souvenirs, bars and excursions, with even a Pub Street that sort of does what it says on the tin. A gentle bike ride along the river (for navigation purposes) reveals a gentler pace of life outside this holiday hub, chickens clucking, cycles swerving goats, and less dramatic trading. 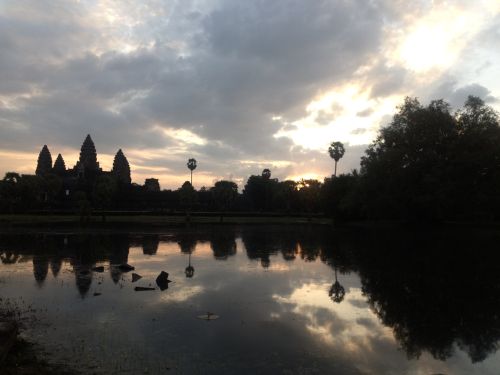 The small town, a mix of French colonial and Chinese architecture serves as a base for probably the most famed Cambodian attraction: the temples that litter a vast area of land around the 1 million population province, the most famous being Angkor Wat, meaning City of Pagodas. A feat of engineering, as anything in a pre CAD mecahnic age is, it is over 13km wide, crumbling and falling due to centuires of plundering and pillaging. Sunrise is stunning here, the dark geometric silhouette against the gently glowing light starting to layer the sky. Cambodia is 95% Buddhist, and teachings and folkloric traditional infiltrate everything. The ascent to the third level of Angkor Wat, the holiest point, is a sharp seventy degrees, causing the climber of the sharp little steps to bow their head at the level required when faced with one so holy and elevated in position compared to their lowly selves. Once painted red it is now fading in colour, but not drama and effect.

Smaller but also on the torusit trail is Tom penh. Here it is snap happy to the max, unfortunately not due to the sublime building structure or the holy aura or the hundreds of year old trees that wind around and over and through the structure, nature merging.

The final temple on this little jaunt was Angkor Thom, known as the temple of faces. The top tourist pose here is to be looking up at a Buddha where the perspective suggests that you are rubbing noses with the statue. Sort of an Eskimo kiss with the Buddha, if you will. But here it is the detail of the carvings and the unrestrained intricacy that startles, both up close and from afar when the geometric hedonism of the more than one thousand temples that cover the area becomes so apparent. 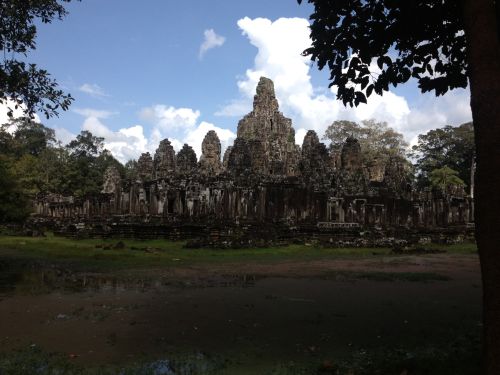 Water is crucial to life in Cambodia, as a source of, and aid for, living. When the Mekong retreats it is time for the annual Water Festival. Parades of people white and holding gifts carrying offerings, the ambience is one comfortable celebration and jovial rhythms. Floods this year prevented the usual activities in Pnomh Penh where the roads close, the people spill out, and the river hosts the annual race, with hundreds of long boats, some housing up to forty rowers, pelting up and down the river.

Ton Le Sap is the tenth largest lake in the world, and with no rent to pay on the lake setting up home here is an attractive proposition, despite the flood risks. The 1600km squared pool is beautiful to visit but life here must be brutal. The potential flood levels are clear when we see stilts over 4 metres above the current water level when rain season has literally just ended, and the lake can reach up to eight metres deep. Moving house literally involves being towed by a speed boat, speed referring to the fact that it is a motorised boat, and motorised by a car engine, rather than any comment on its level of velocity. Life is hard though, brought to attention by the kids clambering all over us to seize a dollarrrrr or two for their goods. Life expectancy is 54 compared to an average of 59 over the wjole countty. mosy househokd earn  only five hundred dollars per year and literacy only is only three quarters of the average at 46%. But when the glistening sun sets on this expanse of water that seemingly has no edges, it is hard not to be moved. 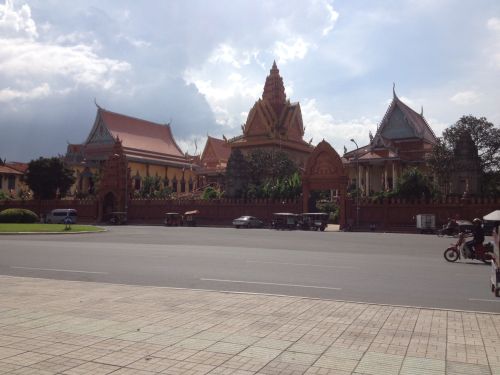 Cambodia smells. It’s a hybrid of smells that in turn stimulates the other senses. The chalky burn of charcoals warming skewered meat kicks of the saliva, merging with the smell of incense sticks that in combination with the scent of lush verdant grass that sweeps across both the towns and cities relaxes and soothes.

Cambodia is sort of beautiful in places, crazy in others. Always there are school children riding or walking, a crisp white shirt and pleated skirts or shorts taking pride in appearance. Even more always there are bikes. Motorcycles are a way of life, with whole families piled precariously on a bowing two wheels, a colander passed between them the only protection from an accident or a fall, all too common. Pnomh Penh, the capital city, is wonderfully chaotic, full of bikes and people jostling and trying to sell you things. Half of the inhabitants are under the age of 20, and population growth, like everything else in the city, has been exhibited at an aggressively fast pace. The river is again the central point, and local people line the paved front to play games, draughts players vying with badminton batters, young lovers avoiding the glance of elders, drinkers meandering through worshippers. Pnomh Penh is busy bristling and brimming with a kind of dirty vitality. The old temple spires vying for sky space with new build office blocks and tumbling down try hards, attracting locals just as much as the bars offering cheap drinks do for visitors. Here they are more aggressive with their demands for a tuk tuk ride, zipping to the pavement and riding alongside you until the tenth firm no confirms no. A real capital, chains exist alongside NGO cafes, expats drink cocktails in the Casablanca inspired Foreign Correspondent’s Club and fish in baskets on the side of the pavement to dry out competes with KFC for quick dinner.

It is Pnomh Penh that serves as a  base for understanding recent history. The harrowing Khmer regime under Polpot saw over a million people killed. A visit to the Killing Fields, Choueng Ek is a harrowing and sobering experience. The remains of 8985 people, many of whom were bound and blindfolded, were exhumed in 1980 from mass graves in this one-time long an orchard; 43 of the 129 communal graves here have been left untouched. The Killing Fields are a strange place, more garden museum than I imagined, rather than stark and sparse like the concentration camps in Europe. Commemoration, commiseration or celebration, it’s unclear. S21, the genocide museum in the centre of town, is an old school that was used to house prisoners. Blood still on the wall is a stark a reminder that this was real people and recently, with many people still mourning loss of brothers or sisters. ‘Inside it hurts so’ says our guide ‘but we have to keep it in.’ This is why, despite so many mentions of corruption, counterfeit and clandestine behaviour, most Cambodians prefer to get their heads down and hands dirty, to make something for themselves and their families without rocking any boats.

Further down the coast on the road to Sihanoukville the vibe is more tropical, palm trees and large houses on stilts along the side of the road. A more seedy feel, it’s not  as clean and crisp as many beach resorts, and an edge is never far away. That said, if the sun is shining and you want to feel the sand between your toes, you could do far worse. As the last destination on our brief trip through Cambodia it is a reminder of how diverse the country is, merging tourism, beaches and countryside in a hybrid hub. 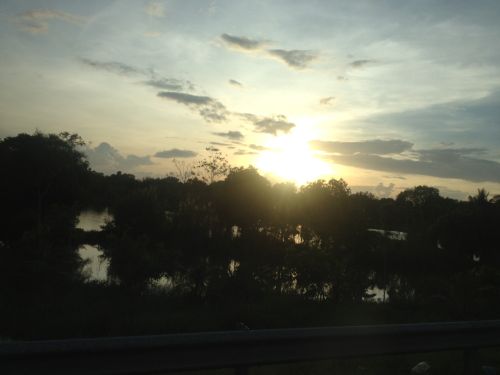 Cambodia is slowly starting to make a name for itself as a destination in its own right, rather than an add on to a South East Asia tour.  The beginnings of the melting pot are certainly there, and as the country and the people start to get back on their feet, a bright future awaits.
http://www.andsoshethinks.co.uk/.   www.twitter.com/andsoshethinks