Conservation under the African Sun

Bizarre but so thrilling – me, a Londoner, sitting between two young Masai men by a waterhole in the middle of the Mara in Kenya. A flimsy barrier of woven branches between us and the resident hippopotamus.

My interest in all matters relating to conservation had inspired me to join a project based at the Mara Training Centre in the Enonkishu Conservancy in Kenya. 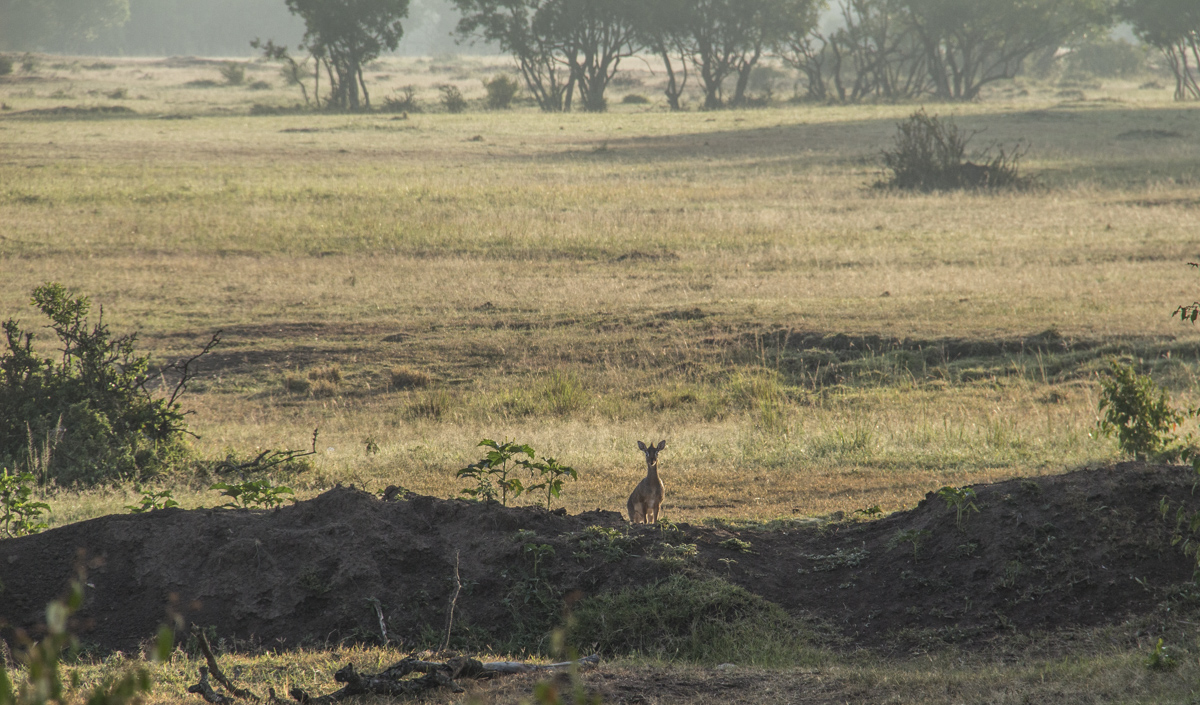 The Project in the Enonkishu Conservancy

The Mara Training Centre, the hub of the Enonkishu Conservancy was established by Tarquin Wood whose family have farmed in Africa since his grandfather established a farm in Tanzania after the Second World War. The centre offers courses from sustainable rangeland management to profitable livestock husbandry and regenerative grazing – all practised in the 6,000-acre community owned conservancy that surrounds it. When the project was started in 2009 the land was barren and devoid of wildlife through over-grazing. The first task was to rid the area of cattle that had no right to be there as they did not belong to the owners of the land. The next task was to encourage the owners to lease their land to the conservancy so that a programme of regenerative grazing could be implemented. This programme involves the use of bomas, mobile fencing, to contain the herds of Masai cattle at night. The action of many hooves (they are closely packed to prevent stampeding should a predator get inside) and natural fertilisation aids the growth of healthy grass very quickly. Good grass has resulted in healthier cows and a return of wildlife from as far away as the Serengeti in neighbouring Tanzania. There are no fenced borders between the Masai Mara and the Serengeti. 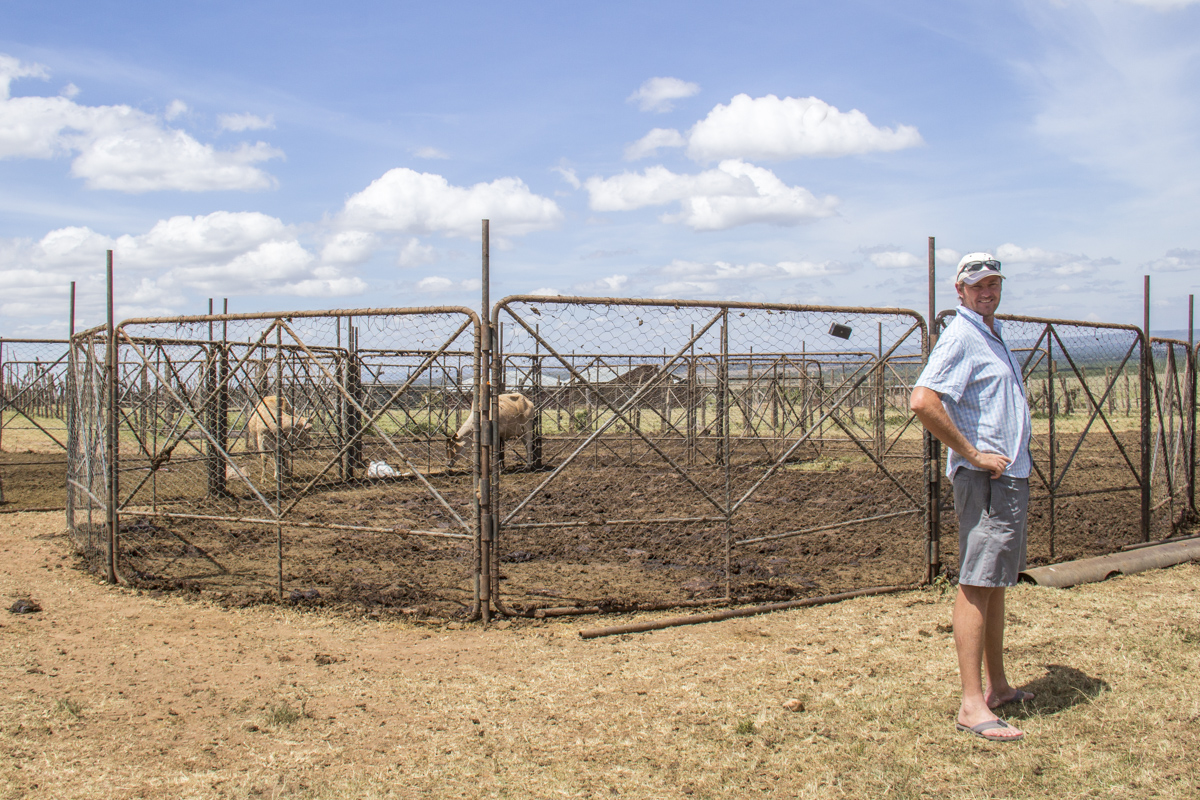 Tarquin Wood by some bomas in Enonkishu Conservancy

My Accommodation in the Enonkishu Conservancy

My group was accommodated at the Mara Training Centre that offers a mixture of bandas (individual brick rooms with en-suite facilities) and tents. Unaccustomed as I am to camping and night time strolls to an ablutions block top of my list of essentials was night-wear that exposed only my head, hand and feet. I achieved this by pairing some leggings with a round necked, long sleeved cotton top. This reducing the risk of feeding the local mosquitoes but no defence to a charge from the hippo that lived in the river a few yards away from my tent. In reality, the small bed in my tent proved to be surprisingly comfortable. My night time rambling was a chance to enjoy the brilliant stars in a clear sky and to listen to the night-time noises – the grunting of the hippo, the howling of a hyena and resident Vervet monkeys crashing through the trees. Other buildings in the centre included the Cow Shed where we had our meals and the Training Centre where our training and daily briefings took place. 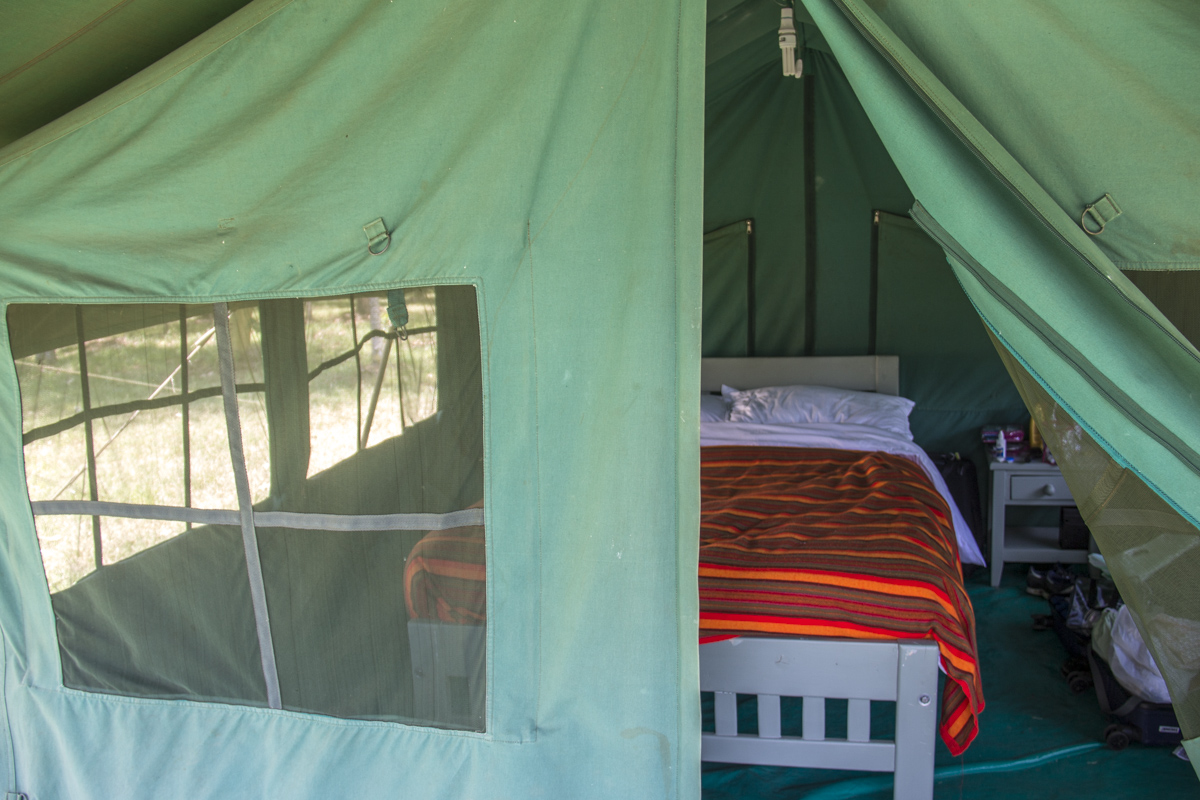 Training to collect data in the Enonkishu Conservancy

Before I was let loose in the conservancy I had to learn some new skills. This included how to check the distance of an animal from our van, the angle it was in relation to magnetic north and our co-ordinates relating to the animals we were observing. Learning all this at once in the Training Room was quite overwhelming but it all quickly fell into place when we were out on observation duties. Other duties included vehicle checks and driving. I was one of those who had expressed my willingness to drive the four-by-four vehicles and was in possession of an International Driving Permit easily obtainable at most Post Offices in the UK. 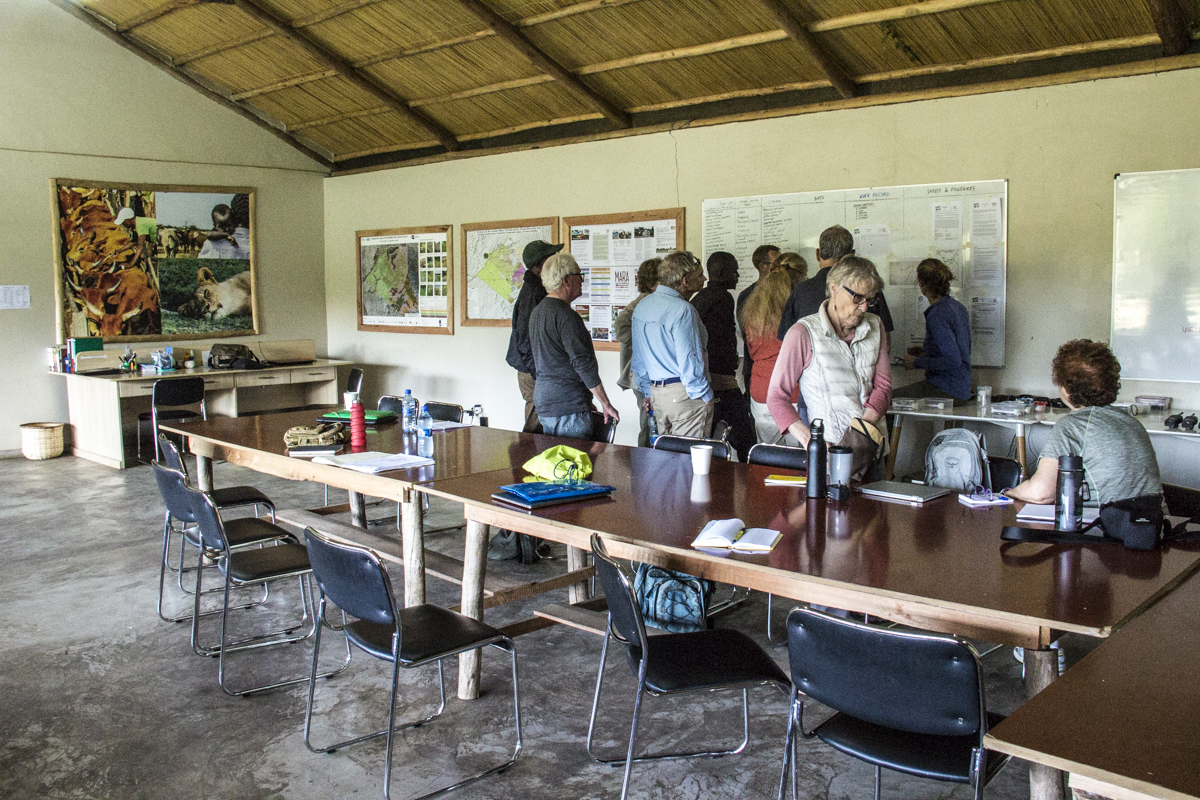 Classroom training complete it was time for some practical experience. Soon after I took the wheel we encountered an elephant. Flapping ears indicated that he was not at all happy about our presence. Rapid reversing was the order of the day before I had even had time to work out where reverse was. It was also the point at which I realised the rear view mirror only revealed the legs of my companions perched on the wooden bench in the cage at the back of the vehicle. Wing mirrors or hanging out of the window were the order of the driving here. Having safely reversed out of danger we had to take a detour to our destination, the water hole where our hide was located. To reach the hide I had to negotiate a big bumpy dip. As my vehicle made its way slowly over the top of this dip I could see nothing but sky and tree tops. It was scary and thrilling at the same time. I had been instructed to let the van ‘walk’ over the top and down into what initially seemed like a ravine to me before encouraging it to climb up the steep back on the other side with a little acceleration. As the days went by I began to enjoy this ‘big dipper’ experience. My driving experiences also encompassed driving along rutted muddy roads after a heavy shower of rain – mostly sideways when each of the four wheels decided to operate independently – and following narrow tracks through dense forest. There were several occasions when I had to stop for 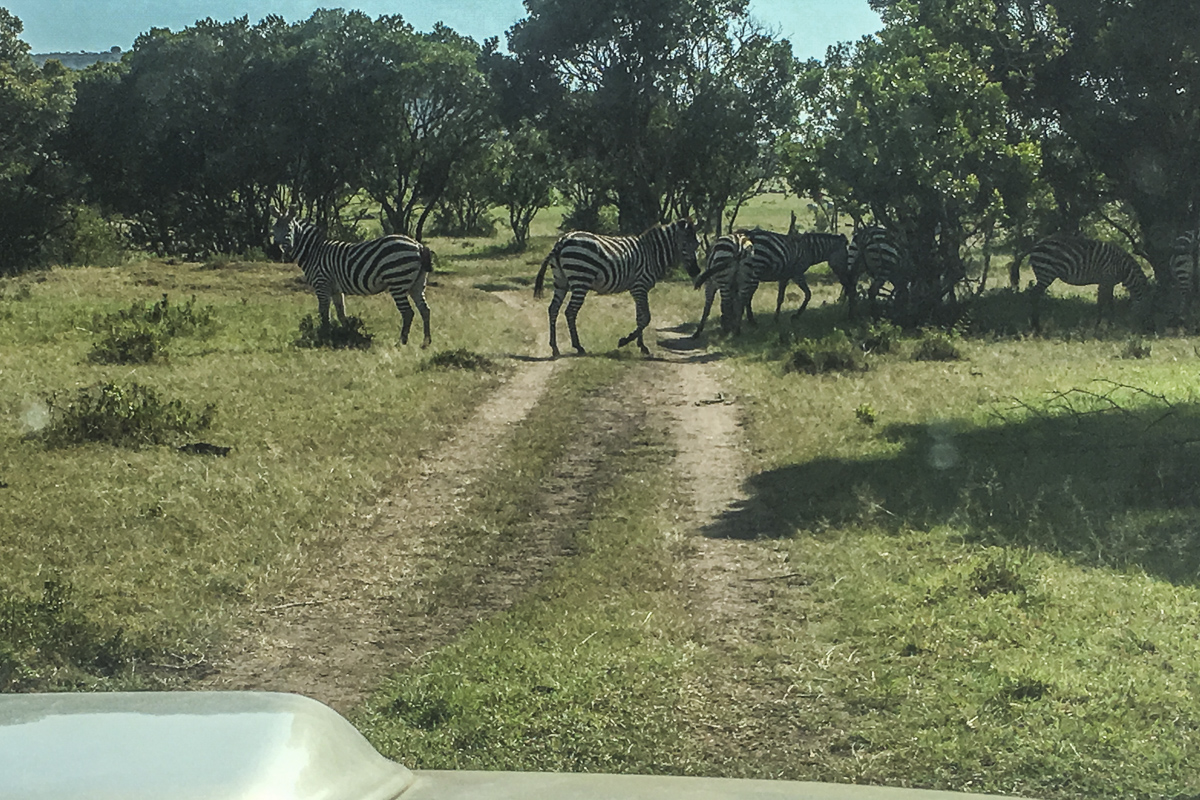 Data Collection in the Enonkishu Conservancy

We followed a variety of methods of data collection in the Conservancy. All of them involved a team of four volunteers and at least one ranger. The rangers are employed to make daily foot patrols to ensure all is well in the conservancy. In particular, they have to check that the cattle are grazing designated areas. On one occasion we ‘lost’ our ranger, Dapash, when we encountered a huge herd of cattle grazing outside the designated area. Within seconds he was gone and could be seen in the distance herding the cows which he would take to the local police station where they would be impounded until the owner arrived and paid the fine incurred. The rangers are paid a bonus for ‘capturing’ delinquent cows so it is little wonder it takes priority over novices like me who have no idea where they are. Fortunately, we had Rebekah, the manager of the conservancy, driving our vehicle but after completing a circle and returning to our original starting point she declared herself to be ‘lost’. Was this a test I wondered to see how I behaved in such a situation? Even though I have no sense of direction I had noticed some landmarks on our way through the forest and was able to point Rebekah in the right direction. 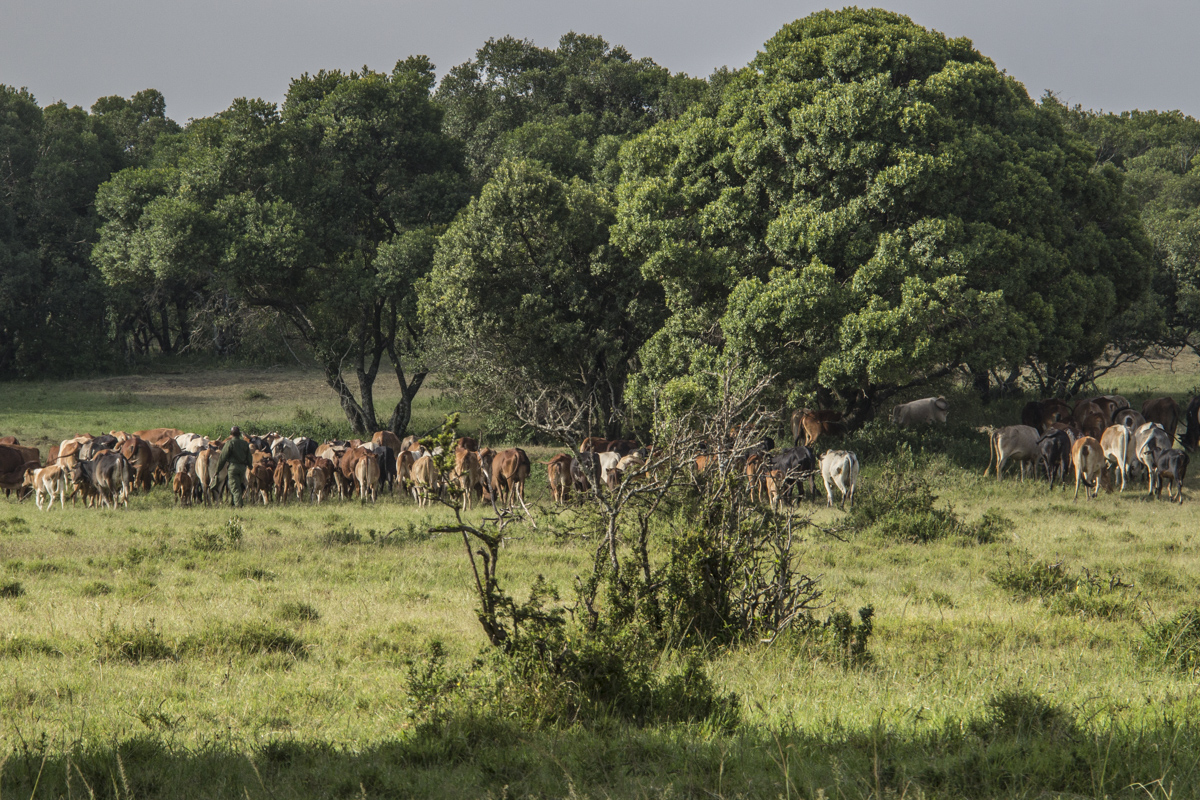 Vehicle Transects in the Enonkishu Conservancy

Each vehicle transect involved following a designated route and collecting data relating to all the species we saw on that route. It took a while accept the futility of using indicators when I was the only vehicle for miles around although I never quite got out of the habit of putting on my seat belt. Sometimes we had to turn back as the local elephant population does not take kindly to intrusions into their territory and block the track by pulling branches across it. In such situations I had to find a way around the barrier. But meeting and coping with such challenges was good fun. Sometimes we would just sit and watch the animals around us. It was such a privilege to watch a family of giraffes inter-acting with each other, a zebra foal suckling its mother or a hyena nonchalantly strolling across the road in front of us. 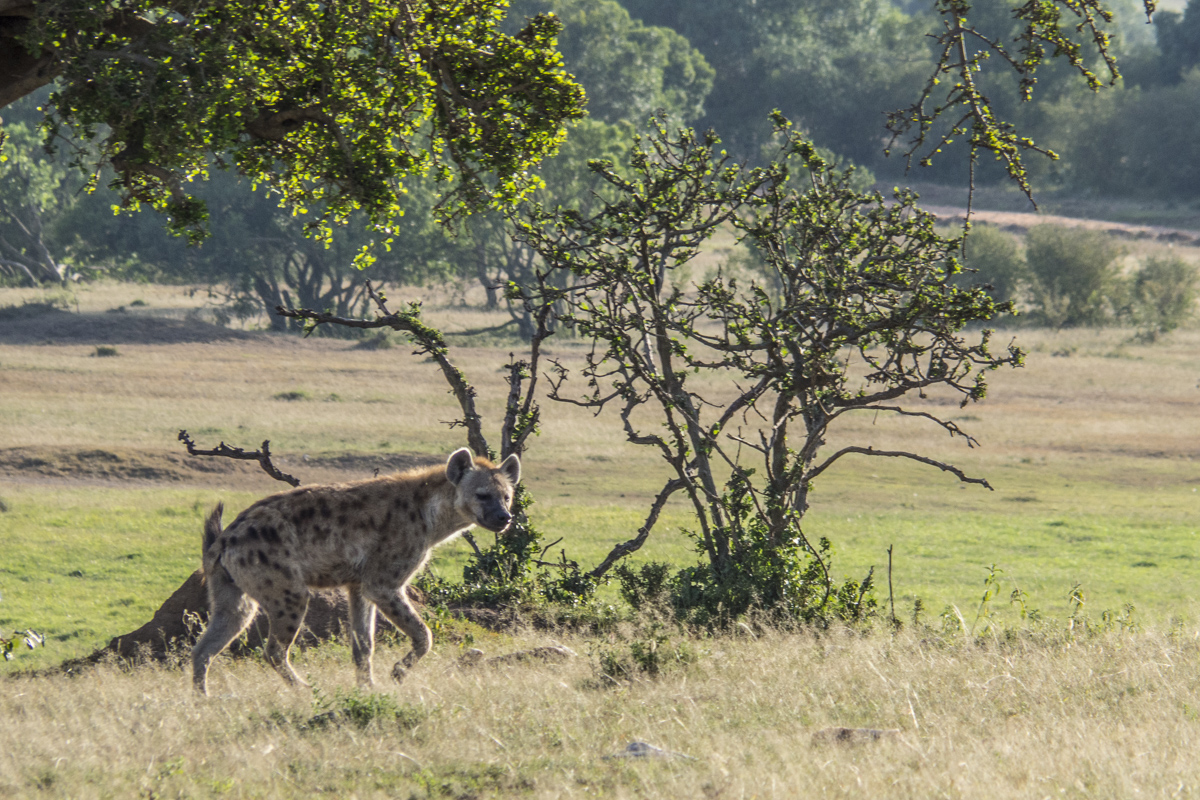 Walking Transects in the Enonkishu Conservancy

Walking Transects started from one of the rangers’ field camps and followed one of their patrol routes. As we walked we looked out for animals, tracks and scat (animal pooh). The latter did not excite me at all but fortunately we had two scat enthusiasts in the group and I could indicate the presence of scat from a safe distance. There were some unique moments in the walking transects I undertook. One was standing on top of a hyena den knowing hyenas were sleeping beneath my feet. Another was walking through a dense forest knowing the rangers suspected there were elephants nearby. I quickly learnt some bush tracking skills. My heart was in my mouth when the ground began to shudder as something crashed through the trees nearby. Phew – just one lone giraffe. Sadly, we came across some evidence of the greatest threat to wildlife here – poachers. The bones of an elephant killed two years earlier were scattered along the path we were following. 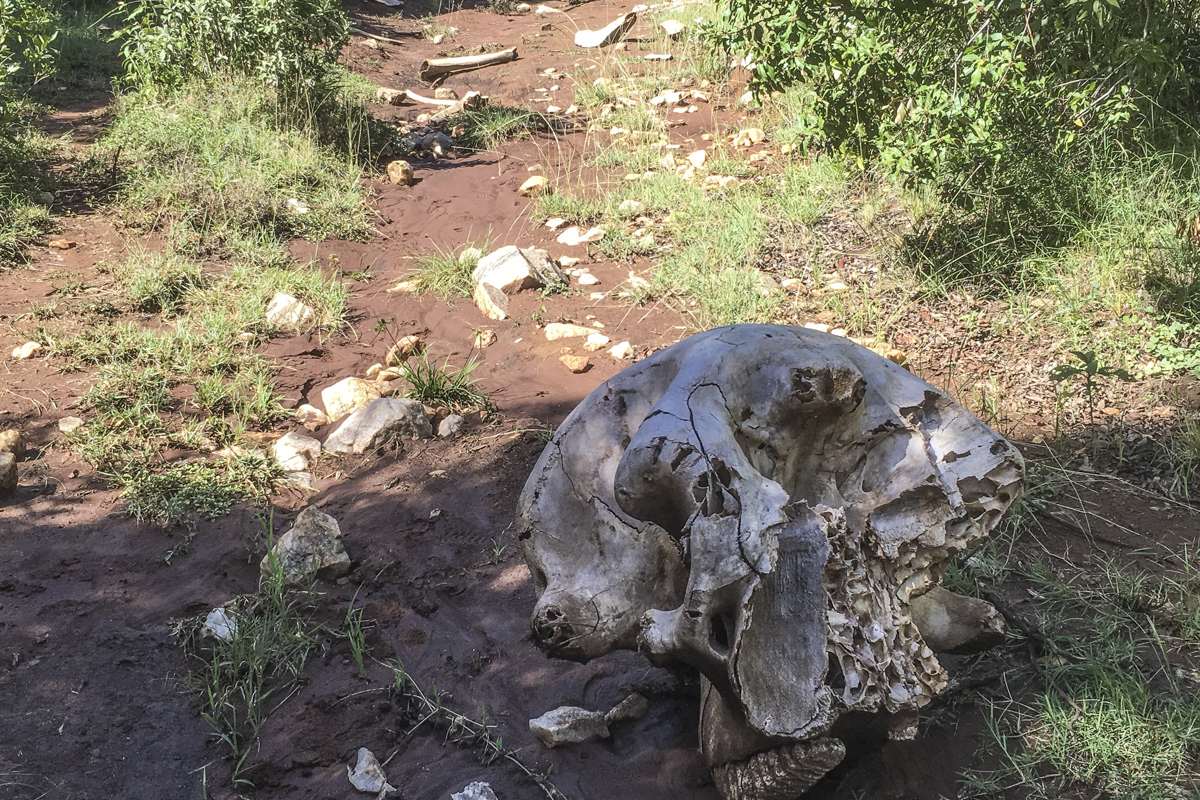 Our team of twelve was charged with the task of observing a water hole created by the construction of the Mamusi Dam. I spent a total of sixteen hours in a temporary hide watching out for the resident hippo and hoping to see the leopard known to reside nearby. A tarpaulin roof separated me from another natural phenomenon- the rainy season. On my first night watch the reflections of a clear night sky sparkling in scattered puddles made light of a dark situation. I did enjoy the orchestra of night sounds – the rasping songs of toads and frogs mingling with the high pitched sniggering of zebras. I and my two young Masai companions spent a lot of time trying to make a white form into something interesting but finally had to accept it for what it was – a rock. During a day time observation, I was under the scrutiny of six giraffes before one of them gathered together the courage to approach and drink from a spring close to the water hole. I had always wondered how they got their heads down low enough to take water – now I know – 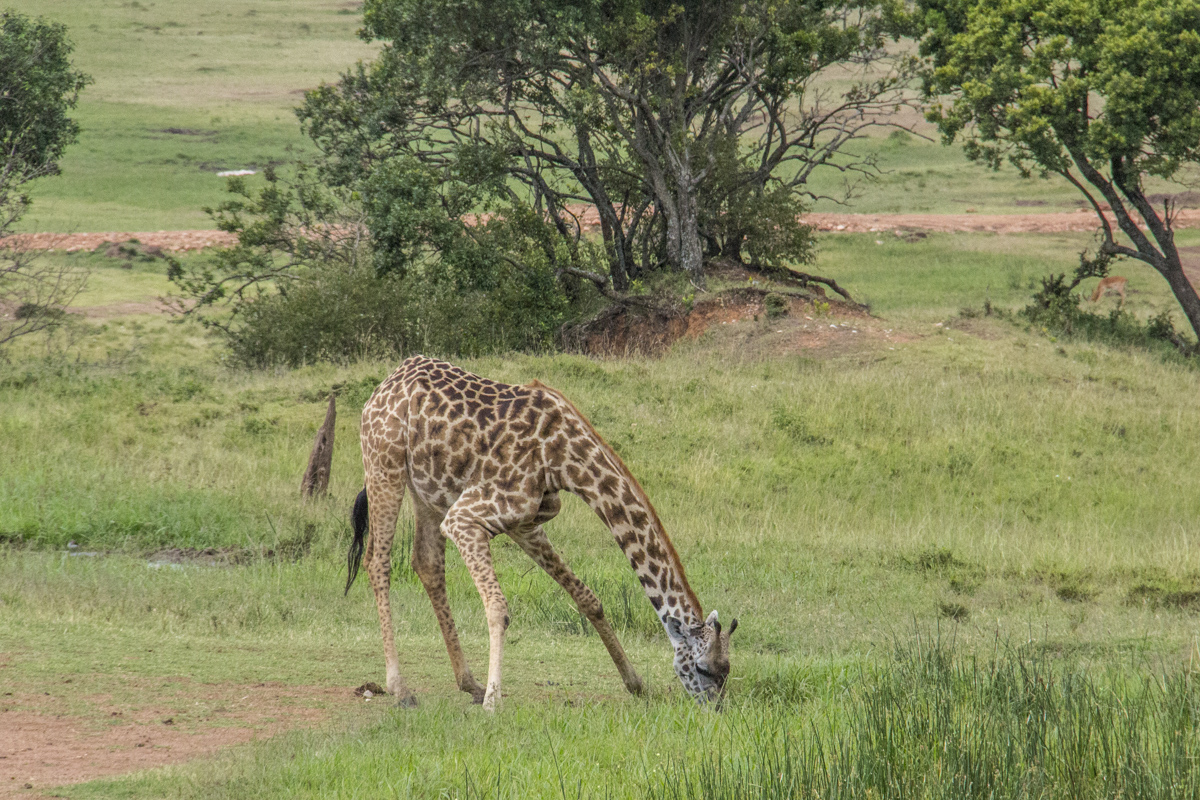 The Hill Observation Point involved driving to the foot of the Kileoni Hill and then walking up this hill to a designated point from which we undertook observations for one hour. The views from our vantage point were stunning and then range within which we could observe animals was over two kilometres. 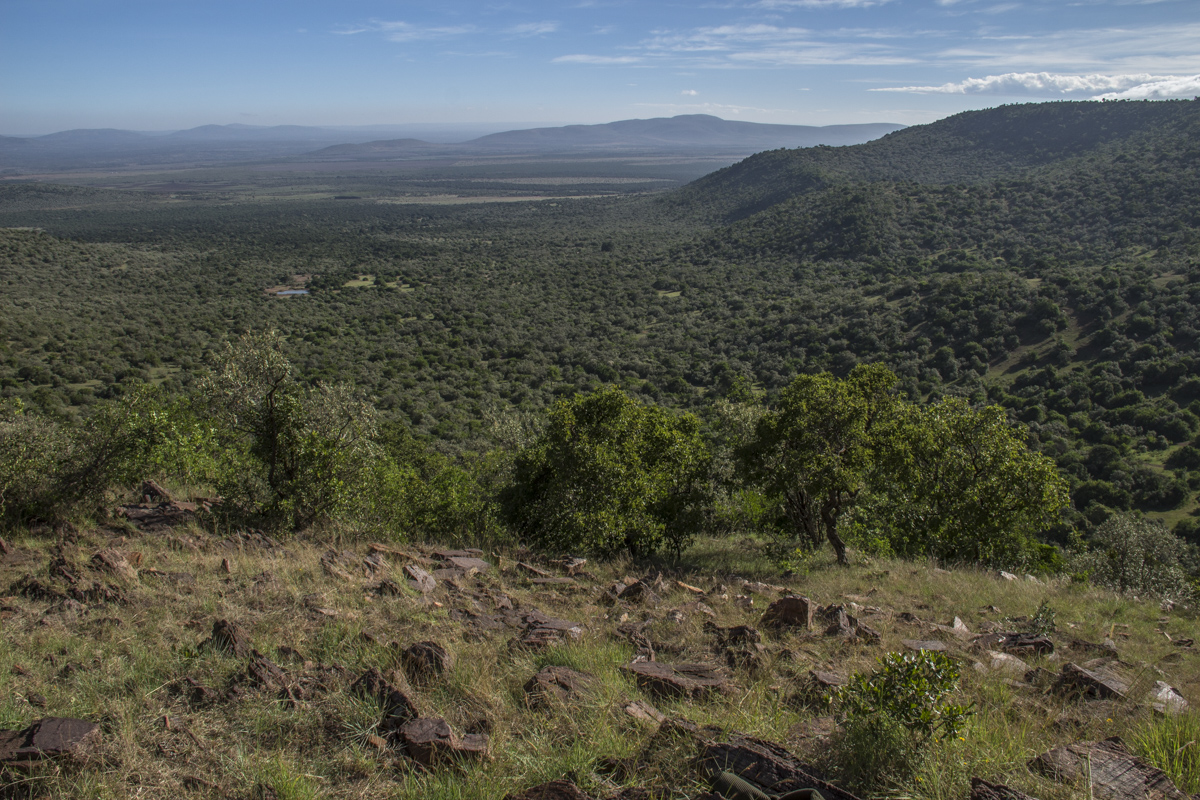 View from the Observation Point on Kileoni Hill

Night Drives in the Enonkishu Conservancy

During my stay in the conservancy I had the option of going on a night drive. I was lucky that on my drive we saw a lot of activity around a hyena den. There were mothers and babies sitting on top of the den while several adults prowled around it. We also saw bat-eared foxes, East African hares and springhares. Night vision torches picked out the eyes of the animals while closer scrutiny revealed the body behind the eyes. I soon discovered the red and green torches that were used were not ideal for taking photographs – as you can see! 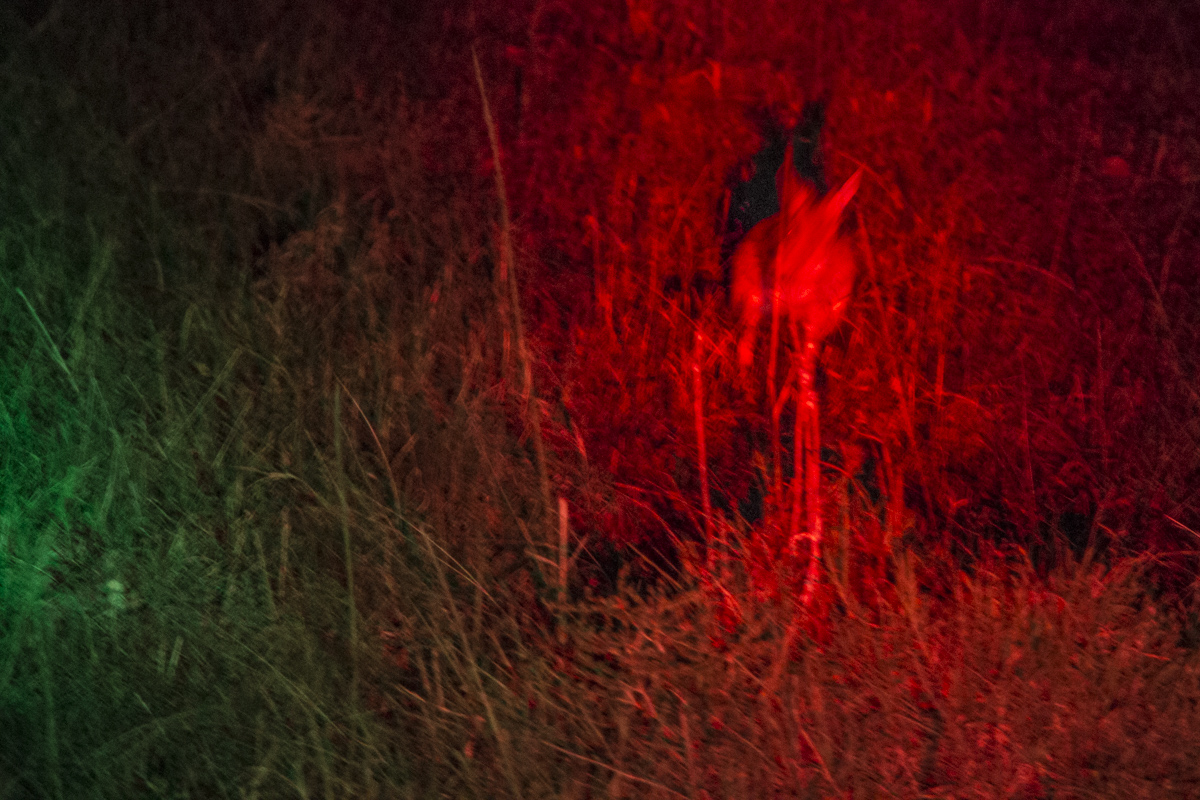 Part of our programme was the organisation of an Environmental Education Activity for a group of children from the Emarti Secondary School, a local school. We drove in a convoy to collect them from the school and enjoyed a tour of this boarding school before we set off on a game drive. This was a real education for us – seeing the old-fashioned classrooms and the basic dormitories. 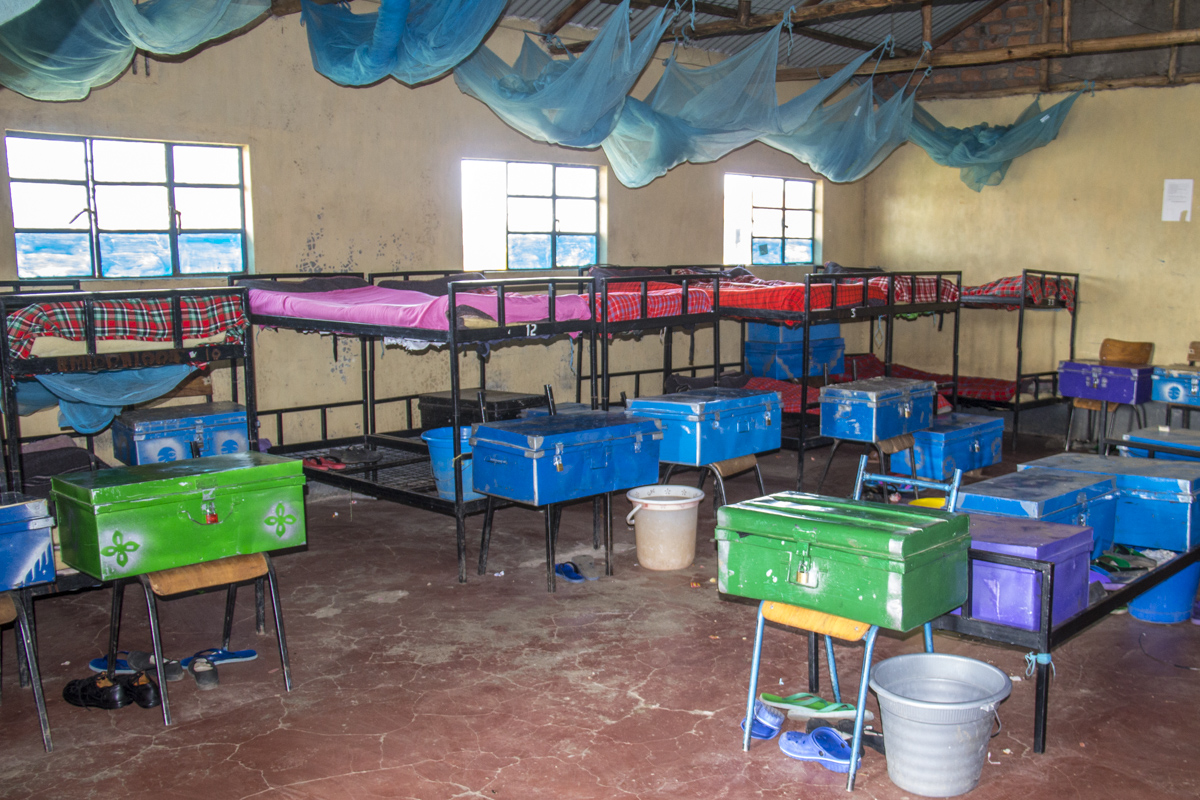 Dormitory at the local secondary school close to Enonkishu Conservancy

As a nominated driver I could listen to the excitement above me in the cage as the children shed their initial shyness and immersed themselves in the activity. One of the teachers sat inside the van with me and took photos of animals he had never seen despite living close by. It was a very worthwhile experience for all of us. 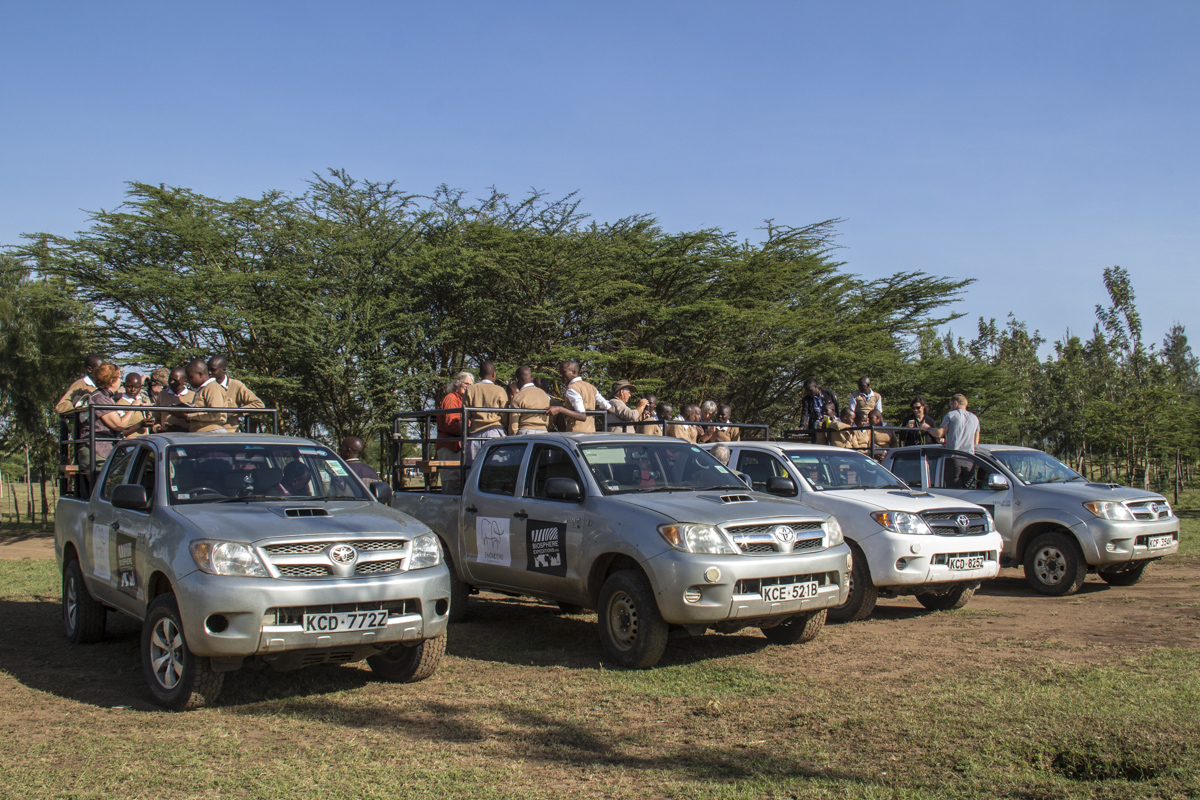 Getting to the Enonkishu Conservancy

This conservation experience was organised by Biosphere Expeditions an international non-profit organisation that runs citizen science wildlife conservation projects all over the world. I flew on a direct scheduled flight with British Airways to Nairobi. I stayed at the Margarita House Hotel which was the assembly point for the whole group the following morning. We were then transported from there to the Enonkishu Conservancy