“We’re not in Kansas any more.” As someone once said. That line pretty much mirrored my thoughts after my opening experiences of Colombia. Having arrvied via a fifteen hour time difference from Japan, where I landed in Dallas earlier than I took off, Bogota was quite a culture shock. But then, what was I expecting. With edgy graffiti, a liberal attitude to litter, and “opportunistic” cab drivers, following the, by comparison utopian Japanese ethical code, I came back to earth with a bump. But not for very long. Aside from the American Airliness employee who did a very good impression of a person caring the least about anything in the history of the world when I asked about my missing bag, and a somewhat aggressive cab driver in Medellin, I don’t have a bad word to say about Colombia. It was easy to get around, the people could not have been friendlier, particularly in the South, and the towns and cultural activities are outstanding.

That said, Bogota, one could take or leave. The best thing about my time here was watching Colombia beat Greece in their opening game of the World Cup, and the chaos that ensued for the rest of the day afterwards. Traffic came to a standsill, horns sounded all afternoon, street parties dominated. With an election the next day, before the game, the government had felt the need to initiate prohibtion from six in the evening, such was the flour throwing, shaving gel everywhere revelry that dominated. I have never heard a city so loud.

In terms of sigths, the Gold Musuem is a must for the slightly scary masks and ornate objects such as tiny birds that were maufactured from the precious metal. The Police History Museum was interesting if only for the shear number of guns on display, and the exhibit of the arrest of Pablo Escobar. As with any city stick to the main tourist areas would be particularly sound advice here.

Moving onto Medellin the former cartel town and stronghold of Pablo Escobar. Medellin is undergoing something of a renaissance, its people now free from the overhanging threats of drug and gang related violence that dominated in the eighties and nineties. The town is flourishing as a nightlife centre and artistic hub. The clubs and bars are busy every night and the works of noted Colombian painter and sculpture Fernando Botero dominate the main musuem and central square. The city is set in a valley so there is greenery on all sides. Similarly its proximity to the equator aligned to its elevation mean that the climate is pleasantly springlike all year round.

Cartagena a stunning town. Architecuturally beautiful with the baroque style dominating. Its cobbled streets are home to numerous colonial churches, cathedrals and classy restaurants and bars. This is where Colombians go to party. Again, there was a World Cup game when I was here, against Ivory Coast this time, and again, the atmosphere around the city was electric almost from day break. After they won the street parties and car horns kicked off again. Brilliantly insane. Of the main sights, an evening stroll around the ramparts at around dusk is perfect for gazing out into the ocean, and as the wind gets up, it serves as a good break from the humidity which is strong most of the day. The old city, much like Jerusalem’s old city is set inside a wall, this certainly adds a biblical and historical feel.

There is essentially nothing to do in Santa Marta. It serves as a base for exploring the multitude of nearby beaches, Parque Tayrona and diving and party hotspot Taganga, That said it is home to several excellent hostels and worth a stop for a relaxed day or two by the pool.

Parque Tayrona isn’t the easiest spot to get to. An hour bus journey out of town and a further minimum forty-five minute jungle walk is required. That said, it is totally worth it as you will find outstanding beaches, particularly the paradisial Cabo San Juan and La Piscina and the one just after Cabo it which is virtually untouched. The thing to do is sleep in a hammock or in a tent among banana trees, and spend a couple of days if you can as its a world away and gloriously quiet.

My final stop in Colombia was the southern city of Popayan. Popayan is something of a well kept secret. At only 200,000 population it is a relatively relaxed affair but home to top class museums, numerous churches, and a stunning main square. It is white washed and is noted, due to the presence of the University as Colombia’s most intelllectual city. The vibe is casual and educated. The pick of the musuems was the Museo Nacional de Guillherme Valencia, the President from 1962-66 and its plethora of exhibits, including colonial era paintings, furniture, and political documents and photographs. Colombia played Uruguay in their World Cup last sixteen game while I was here and the atmosphere was glorious. I have never heard a town erupt so loudly as one, as when James or “Hames” as he is known Rodriguez scored their first goal. The match ended and the chant of Col-om-bia rang out, locals and gringos (travellers) united as one. A special moment that epitomised my just under three weeks in the country. 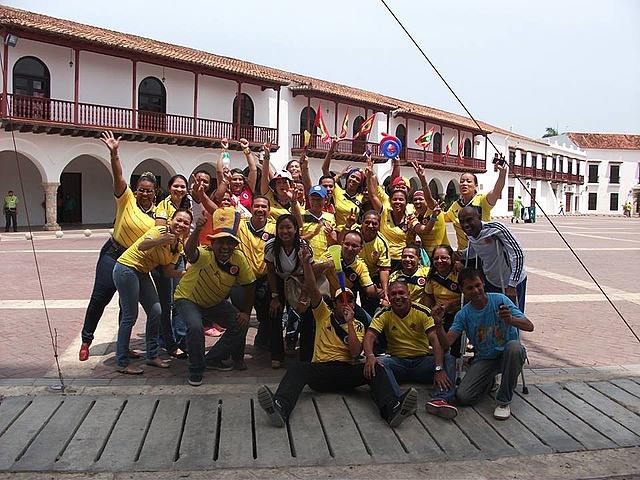