As my wife and I walk down the main street of Oslo, we feel at ease. There is no mad traffic, the airy streets and pleasant squares have a comfortable feel, and restaurants and cafes spill out onto the footpaths welcoming us to stay. It would be hard to find a significant capital city with a more good-natured feel. We quickly discover that this extends well past the main street.

Oslo has about 650,000 inhabitants and is Norway’s financial, political and cultural centre. The city is undergoing one of Europe’s largest redevelopment projects called Fjord City in an area once the domain of port and industrial activity. It is giving Oslo a new face and helping to better connect the city to the water.

Downtown Oslo is built by the water. Its suburbs curve around the innermost shore of the Oslofjord and while this is not nearly as dramatic as the renowned western fjords, scores of pretty little islets give it considerable appeal.

The city centre has remained surprisingly compact and the main thoroughfare – Karl Johans gate – is a good reference point as it starts at the main railway station and ends at the royal palace. It is the location for the city’s parades, and the site of a seasonal ice-skating rink. The street is bustling with restaurants and stores that make for excellent people watching and window-shopping.

Walking along here we come to the dour Oslo cathedral from 1697 which initially has minimal appeal but then we go inside. Elegant restoration has left it awash with brilliant paintwork. The flashy Baroque pulpit and amazing royal box are major highlights.

Along a little further, the yellow-brick Parliament building is an imposing neo-Romanesque building from the 1860s. Fifty-minute free tours in English are held regularly during the year. The building faces a pretty lake-filled park which is very popular in summer and which extends all the way to the National Theatre. 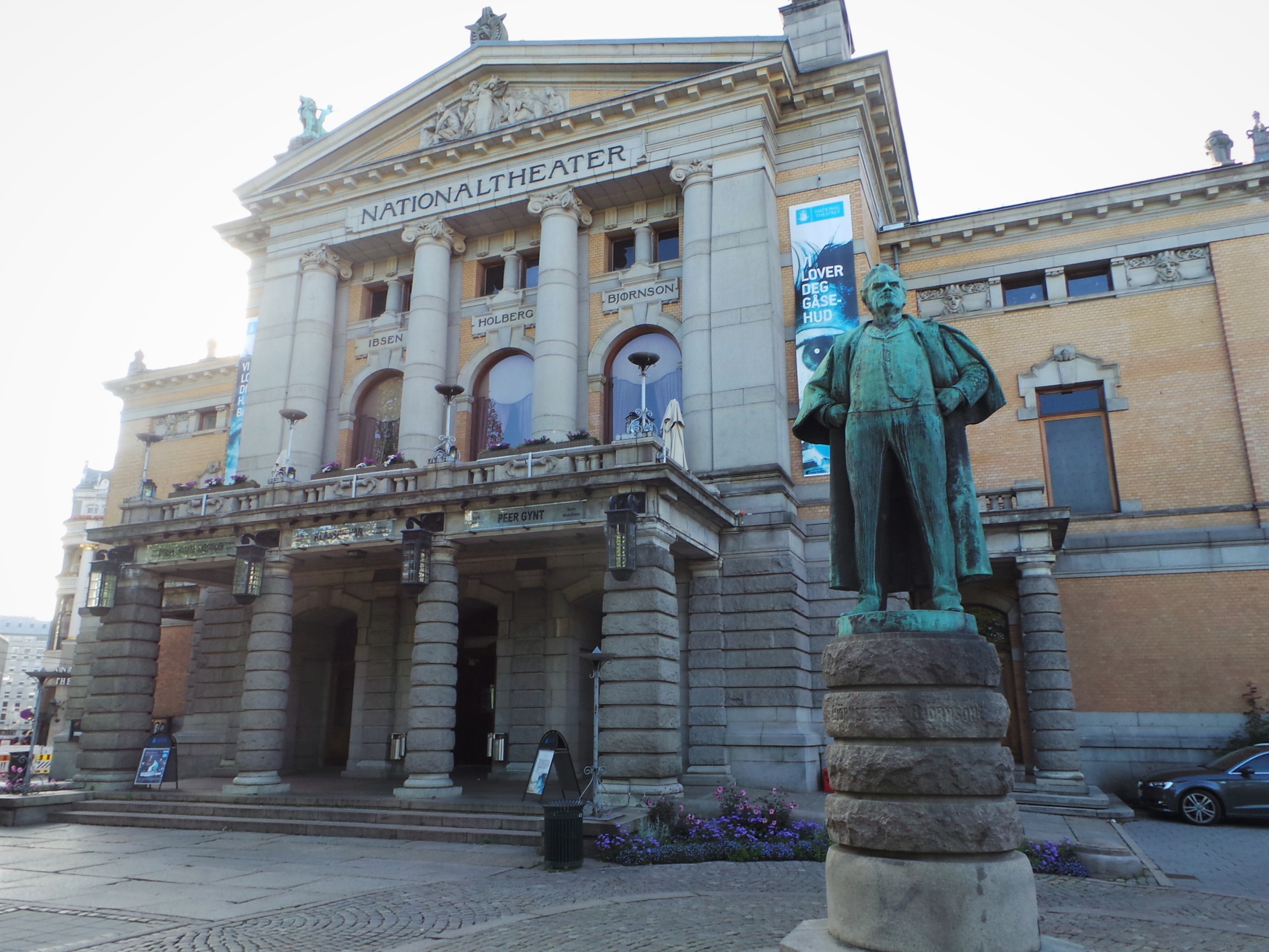 Opposite here stand three grand buildings with classical columns. that are part of the University of Oslo. The Royal Palace is nearby. It stands without walls, and reflects Norwegian openness and general safety. It is built in Neo-Classical style with a facade of stuccoed brick. You can watch the Changing of the Guard each day at 1.30 p.m.

Over several days we find one of Oslo’s biggest drawcards to be its museums, which cover a wide range of topics. Many of the showpiece museums are on the Bygdoy Peninsula a few kilometres from downtown. You reach there on a city ferry from the jetty behind the city hall. 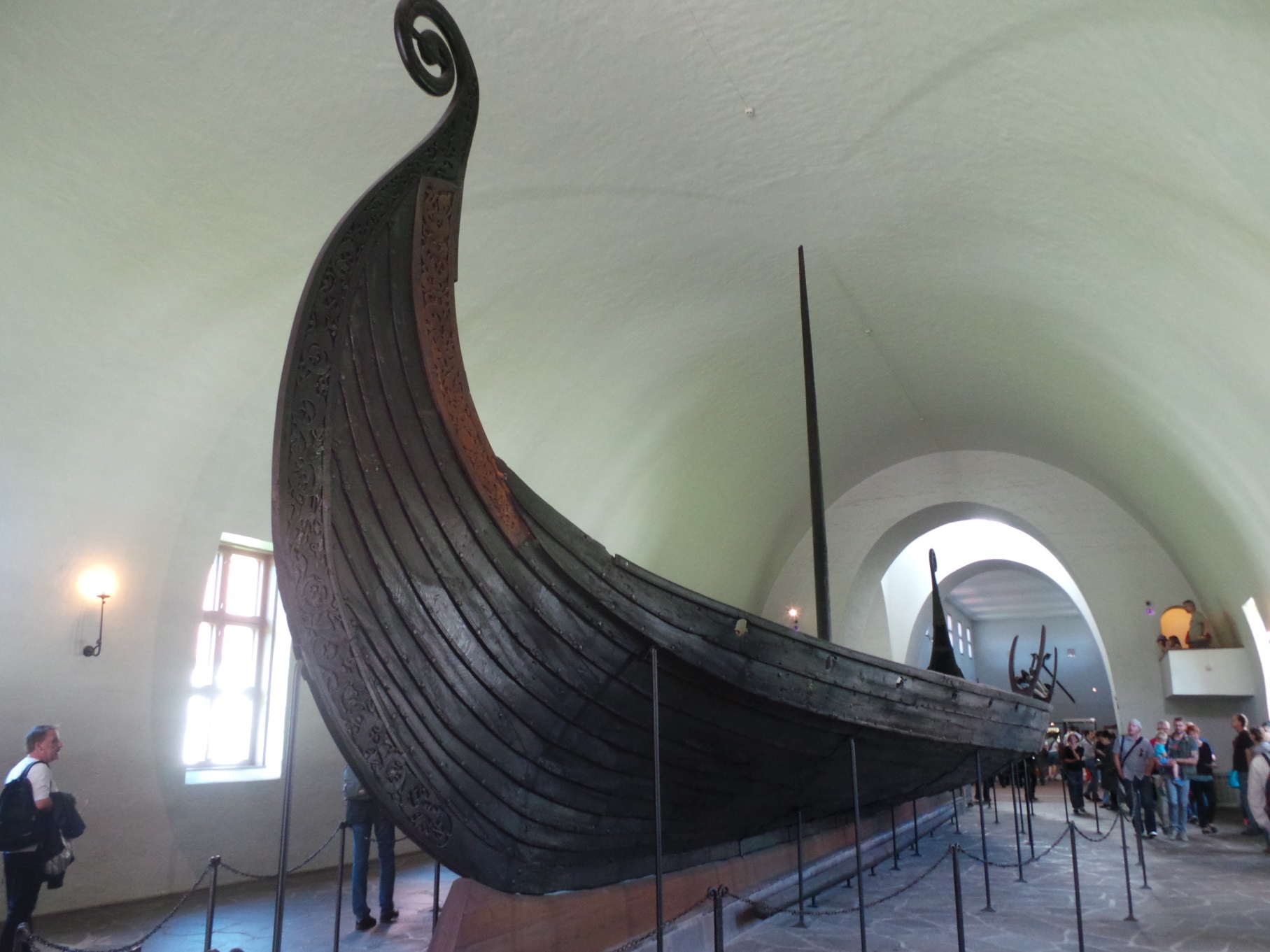 The Norwegian Folk Museum, the Viking Ship Museum, The Kon-tiki Museum, the Fram Museum and the Norwegian Maritime Museum all deserve some of your time. It is easy to spend a whole day here. Back in town there are half a dozen other world-class museums and galleries. A huge new National Museum is under construction behind the Noble Peace Centre. Further out is the glossy Astrup Fearnley Museum of Modern Art in three pavilions under a coiling, silvery glass canopy.

Vigeland Sculpture Park is Oslo’s most popular attraction. This is the world’s largest sculpture park made by a single artist and is open to visitors all year round. There are more than 200 sculptures in bronze, granite and wrought iron. The sculpture park is within a large green area called Frogner Park. Fifty eight of the park’s sculptures are arranged along what is called The Bridge, the main connection between the Main Gate and the spectacular Fountain. 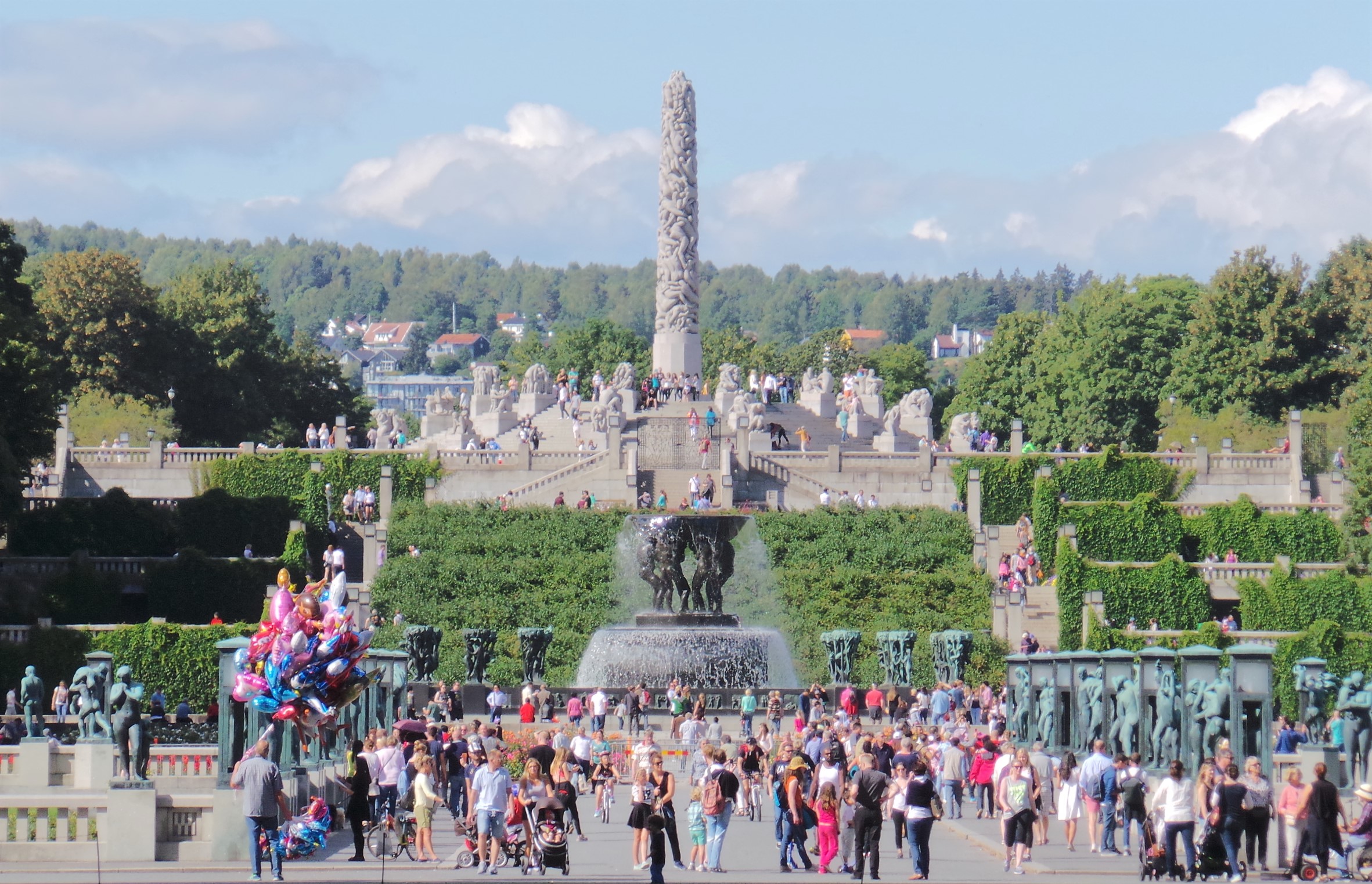 If you take the suburban railway (T-bane) to the Holmenkollen ski jump you are likely to be impressed. You can take an elevator to the top and look down the horrifyingly steep descent and wonder why anyone would want to jump off here. In summer there is a zip line from the top.

While Norwegian cuisine isn’t up there with the world’s best, Oslo has some top restaurants and cafes which provide a memorable experience. Some of these are in the stylish Aker Brygge complex and the new Tjuvholmen area which is characterized by an intriguing architectural diversity and unique outdoor areas, and plays host to several galleries and art installations.

It is worth making the short trip out to Mathallen, a ‘food hall’ inspired by the European indoor food markets. Here you will find stalls, cafes and restaurants, and many food-related activities throughout the year. Closer to the centre is Grünerløkka, considered to be the hipster area of Oslo, where in the evenings there are many restaurants, bustling bars and an exciting nightlife.

Stylish Maaemo is often called the best restaurant in Oslo and in 2018 was rated the 35th best restaurant in the world. The Theatercafeen in the Hotel Continental is probably the best café. For something less expensive try the Kristiania Restaurant and Bar at Oslo’s railway station. Himkok is a classic bar which has been rated in the 50th best bars in the world.

You should try Pølse. These sausages are hot dogs made from a blend of beef and pork, cooked in beef stock. Get it wrapped in a Lompe, a flatbread made from potato, milk and flour. Alternatively, try Lefse, a sweetened soft flatbread slathered with a blend of butter, sugar and cinnamon, then meticulously folded or rolled.

The city has a thriving nightlife scene. Jazz clubs, dance clubs, pubs and bars, and classical concerts are all popular. The spectacular Oslo Opera House is the home of The Norwegian National Opera and Ballet and the fun design of the building attracts many visitors. Taking a walk around the roof is a great Oslo activity for a sunny day. Blå down by the river is considered by many to be the best jazz club in Oslo, while loud and hip Caven Rock n’ Roll Club is in a marvellous old air-raid shelter.

Oslo is an expensive city but there is some reasonably priced accommodation if you search it out. There are budget hotels, pensions, hostels and camping grounds. The traditional Grand Hotel is Norway’s most famous hotel, while high-tech The Thief is stylish and fashionable. Citybox budget hotel is a favourite amongst solo travellers and backpackers, and is just a short walk from Oslo’s Central Station. 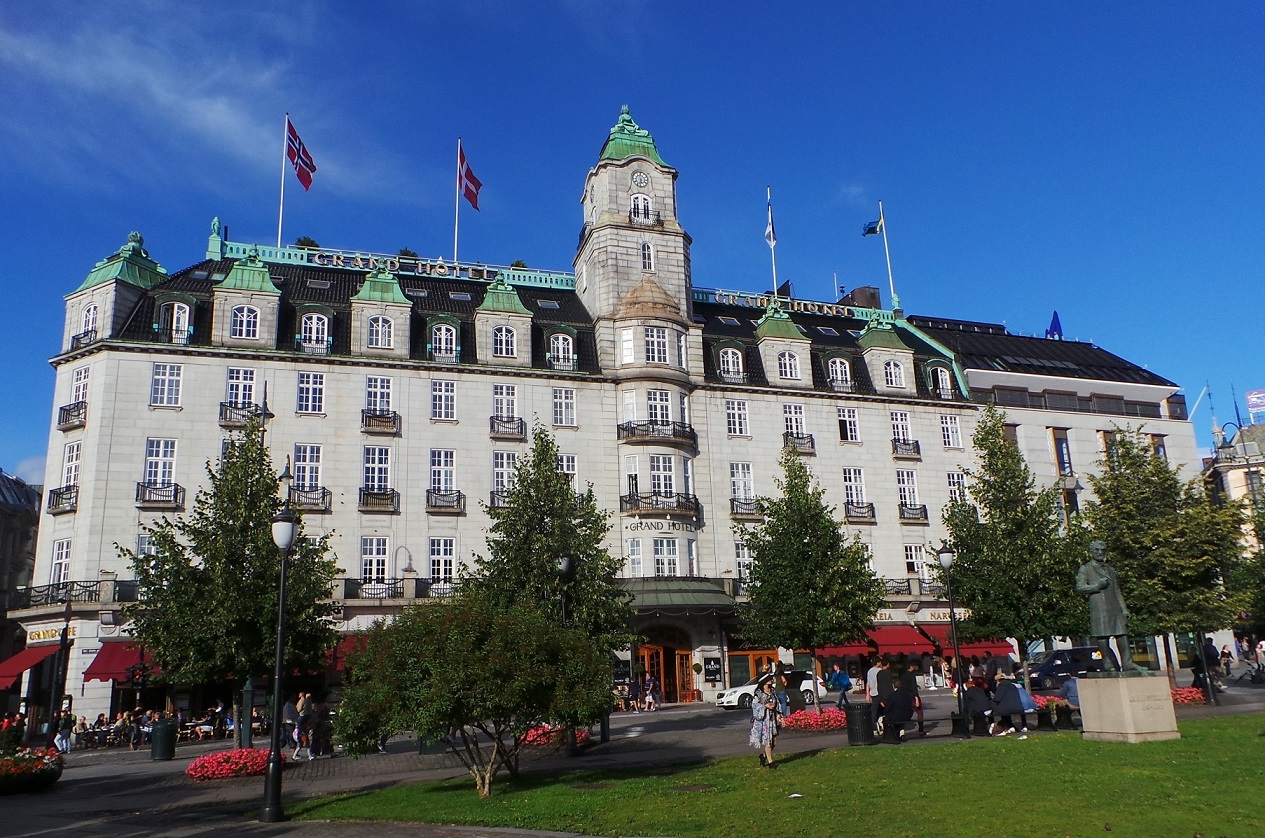 Getting there and around

The Oslo Pass is a good way to explore the city at a discount rate. The card provides free travel on public transportation within the central zone; free admission to many museums and other attractions; free parking in municipal car parks; and discounts on sightseeing buses and boats, car rental and some restaurants.

Walking along the small Akerselva River is one of my favourite things to do in the city. Grab a coffee and head up to the Mollefossen Waterfall about 30 minutes from downtown. You’ll pass old factories, mills and buildings and meet runners, dog walkers, businessmen on their breaks and more.

Don’t miss the ferry ride to Hovedoya Island with its monastery, military ruins, art gallery and walkways, or to sleepy Drobak for a good seaside stroll.

Getting to Oslo by air is easy but you need to be careful about airports. Several airlines serve the main Oslo airport, Oslo Gardermoen and there is an excellent high-speed train from here to central Oslo which only takes 20 minutes. Some low-cost airlines fly to Rygge, a small airport about 60 kilometres from the city, or to Torpe about 130 kilometres from the city.

Len Rutledge is the author of Experience Norway 2019, a travel guide book available as an ebook or paperback at https://www.amazon.com.au/Experience-Norway-2019-Guides-Book-ebook/dp/B07L4CMGS4