Decided on a four day  trip to Barcelona to celebrate our 40th Wedding anniversary.

We drove to Gatwick, using  Long Stay Car Park , rather than getting a cab, the reason being an overall  saving of about £37.

Despite being held up on the M25 due to conversion to “Smart Motorway”, we arrived at Gatwick in good time.

The holiday was booked via B.A. but we were to be flown out and back by Vueling Airlines , a Spanish Company.

All went well, and we arrived at Hotel Cuitadella in the Gothic Quarter of Barcelona late afternoon.

Best described as a boutique hotel, Cuitadella did not offer an evening meal, due to heavy local competition.

We regarded it as our duty to justify this explanation with a mini tour of the local bars and restaurants.

En route roaming the narrow alleys and tree sheltered squares, in the “old”part of the City we discovered a stunning   church, “Santo Maria del Mar”and paid a brief visit.

The evening dinner choice  was Casa Delfin, which was to be our night time home for the next three nights.

The Gothic quarter is the old part of town. Although full of charm, and very busy in the evening, a number of properties are vacant, with the inevitable graffiti on the walls.

The downturn in prosperity might be due to the regeneration of the nearby Harbour which took place prior to the 1992 Olympics.

Day 2 was the visit to Sagrada Familia , the lifetime work of Gaudi the famous Spanish architect.

Finding “The Holy Family” as it is translated, was straightforward, a few stops on the Metro, but gaining access to the Temple was not so easy.

We bought another ticket which gave us entrance at 13.30 , two hours to kill, wandering around  around the local area, and take in lunch.

To say it was worth the wait would be an understatement, Sagrada Familia is like no other building we had seen. 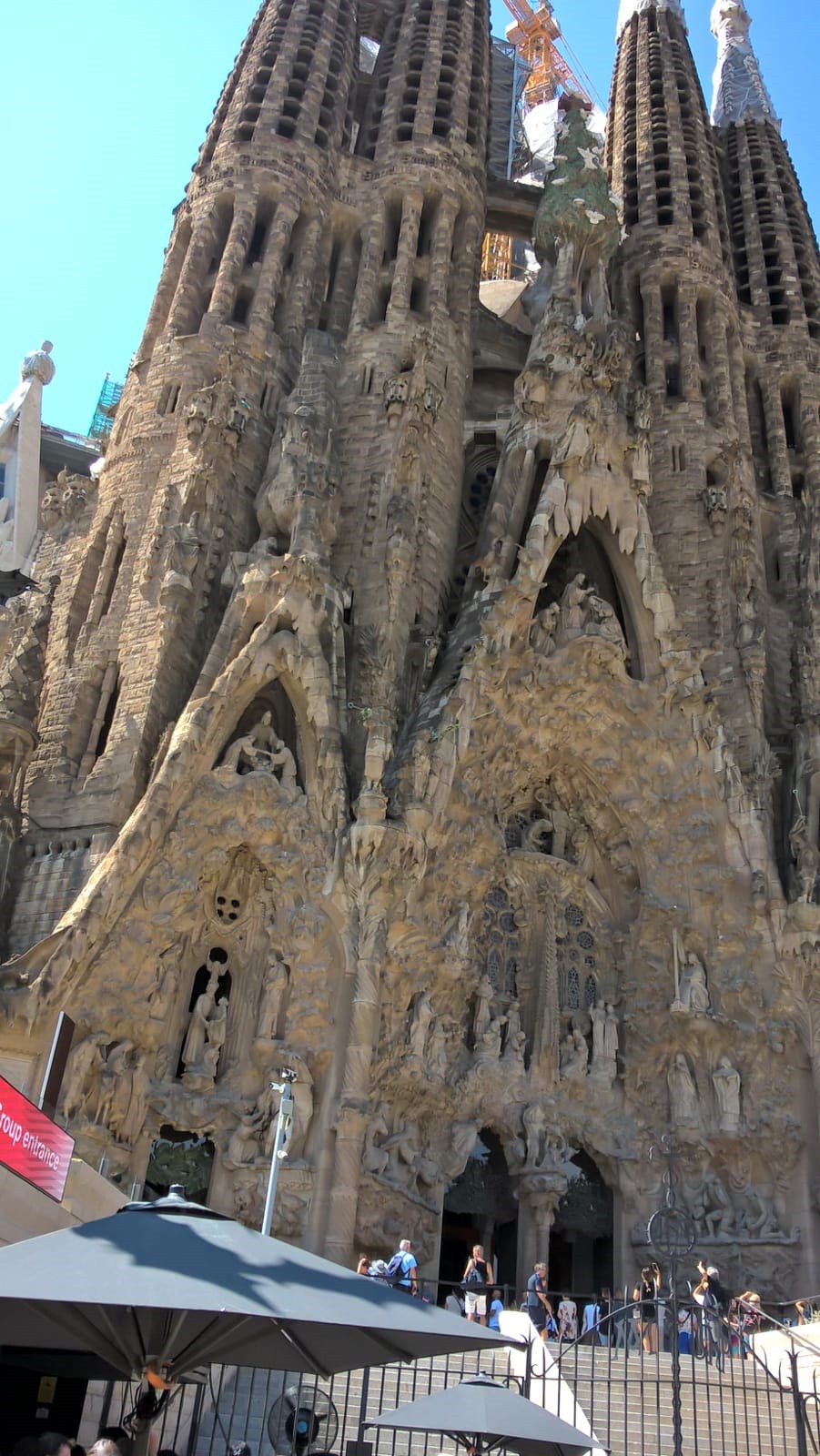 The story of Christ as told in statues and inscriptions on the front and back exterior of the Temple was an incredible sight. So much so, that entering the building was at first a disappointment. By comparison to all other Cathedrals and churches visited, Sagrada Familia is well lit and has a bright marble floor. The walls and pillars are relatively new, in fact the building work will not be complete until 2026, one hundred years after Gaudi’s death. Work started in the 19th Century, so it has been a painstaking process. 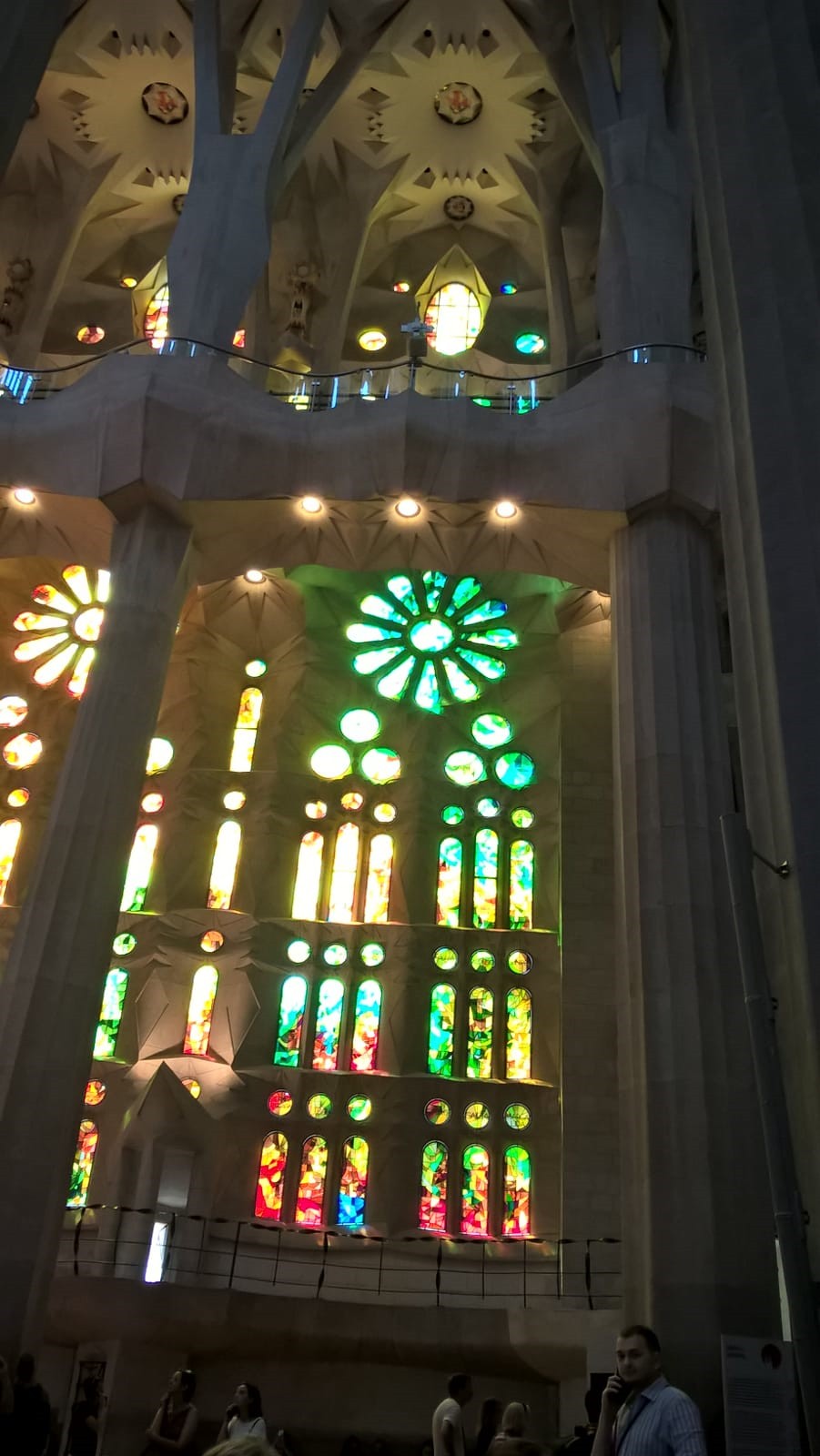 As the telling of the Temple story evolves (you need audio guide ) one realises the Gaudi genius. The ceiling is very high, (I mean very high) , and by 2026 it will be even higher, with the tallest tower about half mile from ground level.

Its not for me to give a detailed description of the Temple, but if you get the chance go there.  In the basement is a museum dedicated to Gaudi, and his work, plus the inevitable shop.

Such was the time spent at Sagrada Familia, we returned to our Hotel and the coolnes of the Gothic Avenues.

Barcelona was hot and humid during our stay, so a couple of septugenarians need their rest before the night time activities.

A few early evening drinks, and back to Casa Delfin.

Our last full day, and we did the ultimate tourist journey, the Hop on Hop Off Bus. On reflection, although very hot on the upper deck of an open top bus, this was the best way to see Barcelona, which is a large spacious City, containing wide open tree lined avenues. There were three routes to take, all lasting two hours. Our young hotel receptionist advised us to take the red and blue (who were we to argue?) and ignore green.

Blue was first up. The first place of interest to pass by was Sagrada Familia, Sitting on a bus, we saw the building from a different perspective, the fascination endured.  We then journeyed through the northern, hillier, part of the City. This was the more prosperous, residential area. A few kilometres more brought us to the village that is Camp Nou, home of FC Barcelona.  Not only a magnificent stadium, but many other activities all under the Barcelona umbrella.

Our starting and finishing point was Casa Batilo where we swapped blue for red, and had a light Tapas lunch. This is the up market shopping centre.

Red route went west. As well as visiting the site of the 1992 Olympics, in an Olympic Park, we travelled through the Business  Centre .

The final stretch was along the sea front. A large Commercial Harbour, preceded a lavish private dock for all the glitterati to moor their billion dollar yachts, and in one case a helicopter. The regeneration of a number of sections of the City took place as a result of the hosting of the 1992  Olympics. None received such a transformation as the Harbour area. 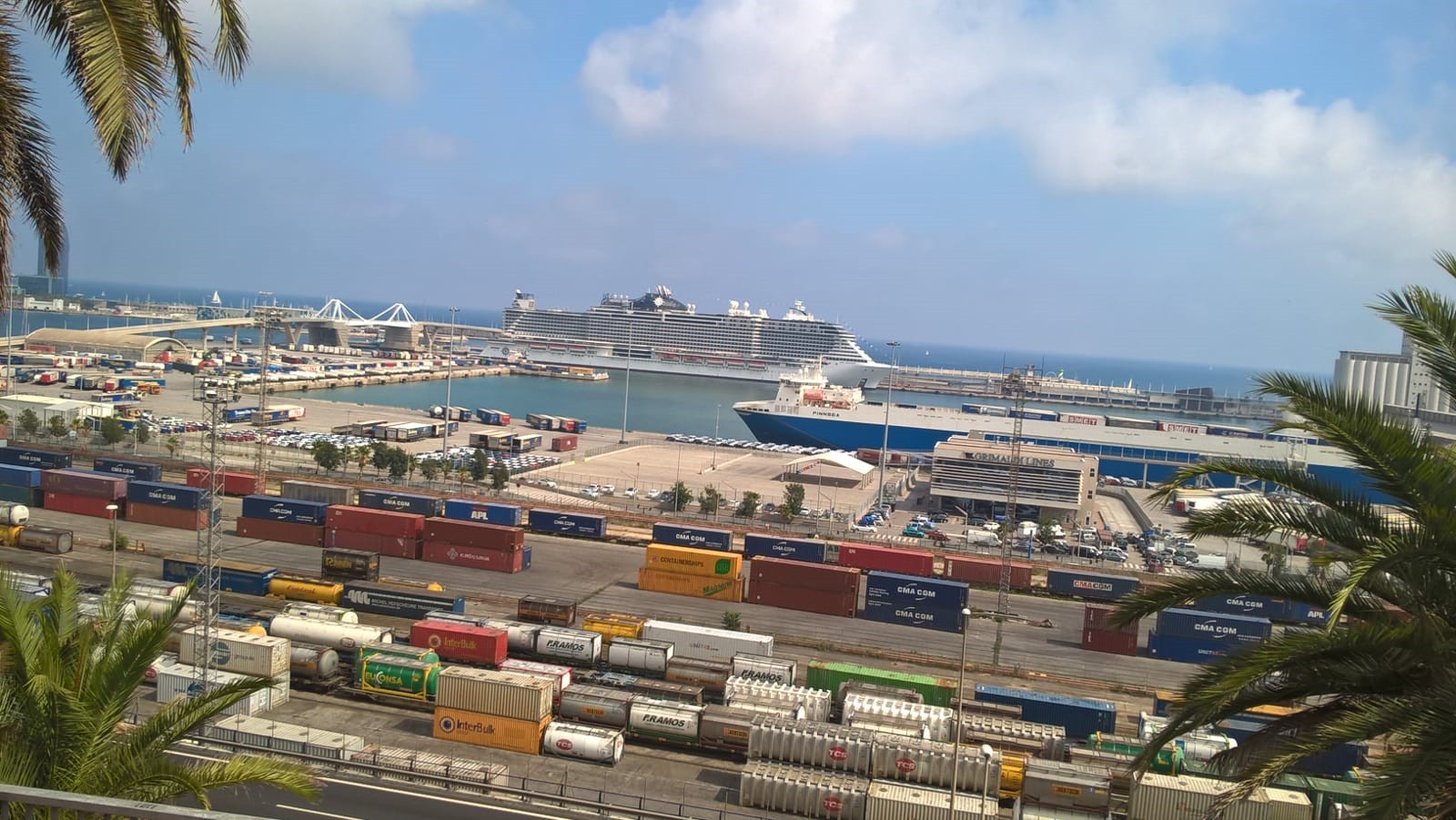 Luckily the weather was so good it showed up the Marina in all its glory.

The last evening and we celebrated our Anniversary at Casa Delfin. Silvio our regular waiter, was there to greet us, and a complimentary glass of champagne was on hand .

The food and wine in Barcelona was first class, and not expensive.

We had been warned beforehand about pick pockets, but saw no sign of any illegal activity.

Barcelona is a clean welcoming City. The people, are friendly and helpful and the city comes across as a happy place. Judging by the numbers of youngsters, out in the cafes, bars and restaurants the people enjoy themselves and are content.

We look forward to returning one day.