Joshua Tree National Park has become a popular destination in recent years, with park visitors more than doubling to over three million per year since 2014.  It’s iconic rock formations, vast sweeping vistas, and namesake “trees” (it’s really a member of the Agave family), draw travellers from around the globe.

Within its borders, the park offers no concessions and only limited options for camping, but there are other accommodations available for those who venture to this part of California’s Mojave Desert. Most are modest motel operations and vacation rentals.  But while the park’s gateway communities don’t offer the large golf resorts of the Palm Springs/Coachella Valley area, there are some excellent options for travellers seeking an authentic desert experience with a touch of luxury. Here’s the best of the bunch…

The Oasis of Mara in Twentynine Palms has been welcoming visitors for 9,000 years.  More recently, the 29 Palms Inn, situated on the lusher, western end of the oasis, has been operated by the same family since 1928.  It’s one of the two historic inns of the Mojave Desert found near Joshua Tree National Park.

With its 1920’s wooden cabins and 1930’s adobe bungalows, the Inn’s historic accommodations are somewhat more spartan than most modern resorts.  But if your goal is to decompress and relax, then the Inn’s 70-acre property that abuts Joshua Tree National Park’s eastern half of the Oasis of Mara, with its native palm trees, pond, and gardens, might be just the right thing.

A stay at the Inn allows for drinks by the pool; desert casual fine dining at the Inn’s restaurant, which grows much of its own produce at its Faultline Gardens; a nature walk with the Inn’s award-winning naturalist, Pat Flanagan; and, easy strolls to the nearby Old Schoolhouse Museum and 29 Palms Art Gallery.  The Inn serves as the perfect base for visits into Joshua Tree National Park, Mojave Trails National Monument, the Mojave National Preserve, and Sand to Snow National Monument.

You can choose to do absolutely nothing, or you can set off to explore the desert and a host of natural, historical, and cultural  attractions during your stay. Hollywood stars and music legends have found the 29 Palms Inn very much to their liking, and the unwritten rule at the Inn is if you see a star, respect their privacy, as they come to get away from all the attention that usually follows their public lives. 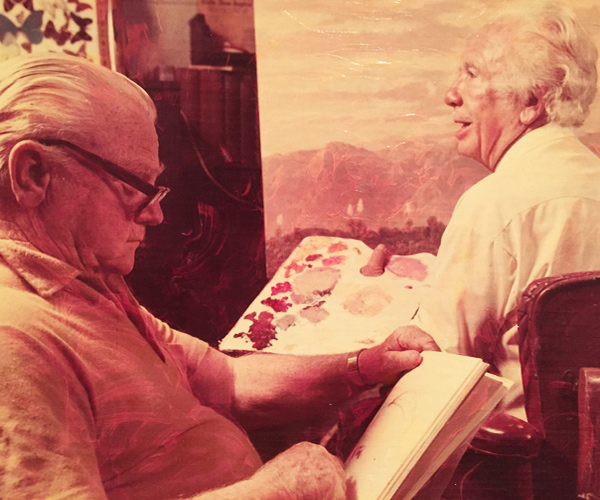 James Cagney and John Hilton at the 29 Palms

While staying at the Inn, your day begins with a complimentary breakfast, and may include seasonal yoga classes, or if you’re artistically inclined (or even if you’re not), a private art class or art party at the 29 Palms Creative Center & Gallery.  If you’re a bird watcher, you may head to the pond and gardens to spot one of the 180 different types of birds that have been documented visiting the oasis.

Got a book you’d like to get to?  There’s nothing like an afternoon spent reading in a hammock at a real desert oasis followed by drinks, dinner, and live local music poolside under a desert moon.  Looking for magic? Look up after dark. The desert’s night skies are pure magic, and watch for the owls as they silently glide through the palms.

The Inn’s a solid choice for special events as well, from family reunions to weddings, and their restaurant staff provides catering services.  Whether you’re looking for a long weekend away from it all, or a big family gathering, you’ll find that even after thousands of years, the Oasis of Mara is still welcoming visitors with true desert hospitality. 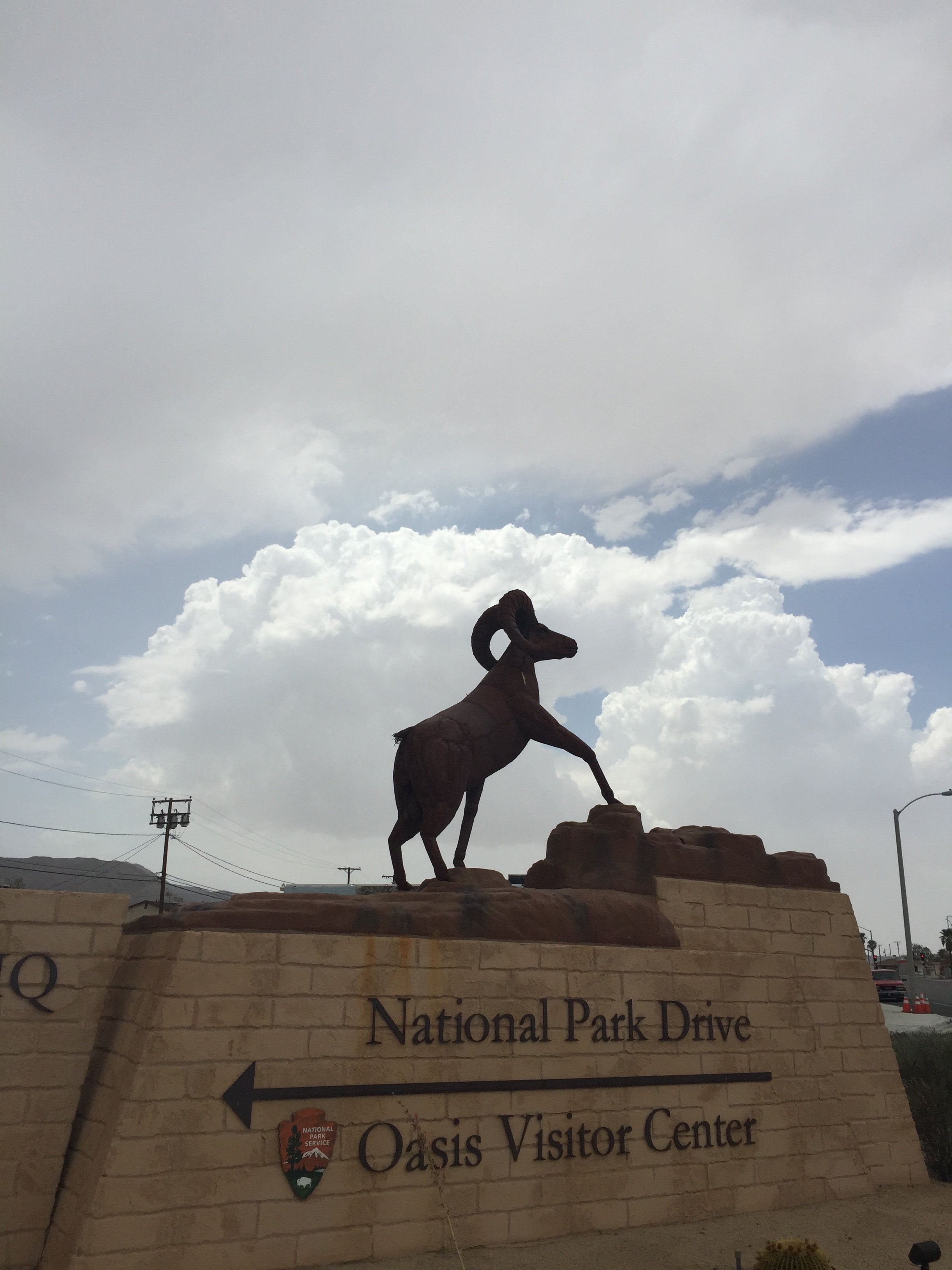 If you’re seeking a little more privacy and pampering, not far away from the 29 Palms Inn (and operated by the same family), is the historic Campbell House.  This desert inn is set on 25 acres, part natural desert, part shady, inviting gardens.

The inn is named for the couple, Bill and Elizabeth Campbell, who built the Campbell House in 1925.  William Campbell, an orphaned Los Angeles native, and Elizabeth Crozer, daughter of a wealthy Philadelphia banker and manufacturer, met when both were members of a mutual friend’s bridal party.  It was love at first sight – for them, not for Elizabeth’s parents. Bill enlisted in the military in 1917, and was sent off to join the Allies in World War I. Two days before the Armistice, Bill was exposed to mustard gas.  He returned home in poor health, but despite that – and the strong objections of Elizabeth’s parents – the two were married in 1920.

The couple met Dr. James B. Luckie, known as the “father of Twentynine Palms,” who urged veterans suffering from mustard gas exposure to go live in the desert where the climate was favorable for those with respiratory problems.  Dr. Luckie is estimated to have sent more than 300 veterans to go live in the Twentynine Palms area. The couple initially camped near the Oasis of Mara and Bill’s health improved. The Campbells homesteaded at the location where the home now stands that bears their name.

The main house has the appearance of an English manor house, built from stone gathered by the Campbells and their neighbors.  Guests may choose from suites and cottages, and enjoy a complimentary breakfast served in the formal dining room. Lounge poolside or soak in the Jacuzzi, stroll the gardens, or get a game of bocce ball going.

Need to seriously unwind?  The Campbell House offers Reiki and energy balancing sessions, massage therapy, and reflexology (also available at the 29 Palms Inn by request).  Bringing Fido? The Campbell House offers five designated pet-friendly suites. Try the Campbell Suite upstairs in the main house for a two bedroom suite that hosts up to four.  Or go back in time with a stay in The Cottage, the 1920’s residence built by the Campbells to serve as their temporary home while the manor house was under construction. Whichever accommodations you choose at the Campbell House, you’ll find a touch of desert history, and a hint of the love story that led to the creation of this stunningly beautiful desert refuge.

There are times when you want – or need – to get away from it all, and if you’re serious about it, then Calmada Private Resort may be right for you.  This 35-acre secluded private luxury resort is set among the rock formations and volcanic buttes of the Sand to Snow National Monument, north of Pioneertown, an Old West town built in 1947 as a location for Hollywood’s western movies and TV shows.

Calmada has its own private helicopter landing pad, which makes it quickly accessible from anywhere in southern California.  To top it off, it’s a scenic flight (though you can drive to the resort as well). Celebrities have decompressed here – from Johnny Depp and Clint Eastwood to The Cure and Demi Moore.

If you’re hosting a family get-together or corporate retreat, wedding, or other small group event where you want seclusion and privacy, Calmada fits the bill nicely, though note that children are not allowed, but pets are (with a deposit).  The resort home is spacious and comfortable, with a scenic outdoor pool area with private outdoor shower and bathroom, lighted gardens (and a night sky that is stunning), and a large palapa suitable for group yoga or other activities. Yoga, massage, and meditation sessions can all be arranged.

Guests are well provided for at Calmada, and if you don’t feel like cooking, arrange for one of the resort’s chefs to prepare a delicious range of dishes which incorporate your preferences and needs.  Your stay can be arranged so you never need to leave the property as you soak up the hi-desert’s fresh air and archetypal western vistas made famous through the movies and shows shot in the area. French designer Chris Beaugrand has personally decorated each of the resort’s five guest rooms, and each room tells its own story with a bit of a French flair.

You might wonder as to how a Mojave resort came to have a French theme, but this area has a unique French connection dating back to when Edith Piaf stayed in Pioneertown (La Vie en Rose was filmed here).  Piaf was smuggled up to Pioneertown in the automobile trunk of her lover, champion boxer Marcel Cerdan, who was training for the world championship title here. Beaugrand’s personal connections include a relative who was a famed ballerina in Paris, and Gustave Eiffel, another relation who needs no introduction.

Being a mix of Hollywood and the Old West of the silver screen, Pioneertown’s history has been eclectic, to say the least.  Gene Autry and Edith Piaf both sang out here, and Roy Rogers threw out the first ball in the Pioneertown Bowling Alley. If you do venture out from the seclusion of Calmada, Pioneertown is nearby, with the legendary musical roadhouse and open pit mesquite barbecue, Pappy & Harriet’s Pioneertown Palace, as well as artists and shops on Mane Street.  Seasonal Old West shows and gunfights take place on weekend afternoons, and it’s not uncommon to encounter western re-enactors, music video shoots, and horseback riders as you stroll toward the OK Corral.

If you enjoy hiking, then the nearby Pioneertown Mountains Preserve offers trails for all levels of hikers.  Follow the small stream up Pipes Canyon as it slowly climbs into the San Bernardino Mountains. Wildflowers are often in bloom, and hikers may encounter wildlife, Native American petroglyphs, and a historic homestead along the trail.

There is also a dirt forest road that those with four-wheel drive and high clearance vehicles may take through the mountains up to Big Bear Lake (there’s a rural highway available nearby for those with passenger cars), for fishing, skiing during winter months, and sightseeing.  If you’re seeking a more cosmopolitan experience, Calmada is an easy drive (or helicopter flight) away from Palm Springs, with its fine dining, art museum, shopping, and golf.

One of the best things about desert living is being able to hike or explore somewhere in Joshua Tree National Park or one of our national monuments, preserves, or wilderness areas during the day, in relative solitude and quiet, and then return in time for a cocktail by the pool as the sun sets and the night sky emerges.  Just prior to sunset there’s a moment of golden “sweet” light that transforms everything it touches, making rock formations and Joshua trees glow as twilight descends. Toasting the sunset in the company of friends and family, as the sweet light gives way to the dark desert night sky is a memory to cherish. 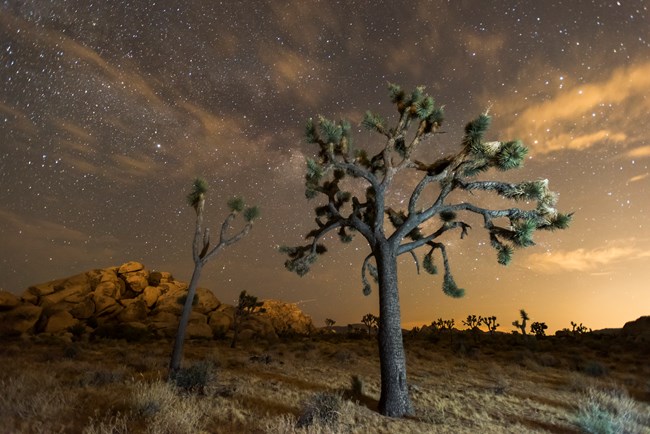 The Joshua Tree National Park gateway communities offer numerous recreational opportunities for visitors, ranging from rock climbing (the park is one of the country’s most popular rock climbing destinations), to a day of world class golfing in the nearby Coachella Valley.  Day trips offer a great way to explore more of the desert, from Route 66, to the Colorado River. While the desert is usually welcoming, it’s recommended to keep your car’s gas tank filled, and to bring plenty of water and food with you.

Cell phone service can be spotty, and help can be far away, so it’s important your vehicle – and you – are prepared properly.  Many visitors aren’t used to the long distances found in desert travel, and are accustomed to following whatever route their GPS sends them.  Never entirely trust your GPS in the desert, and never take a dirt road that seems questionable. Use common sense and respect the desert, and you should have a safe, enjoyable trip. 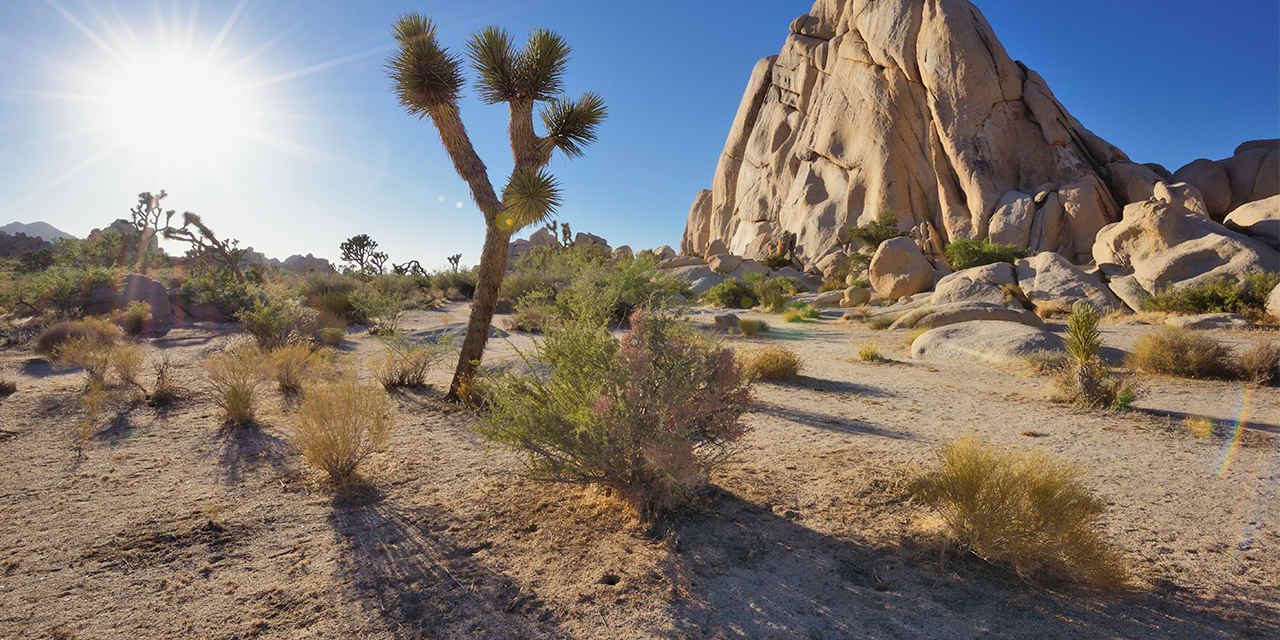 RV Camping within the park: https://www.your-rv-lifestyle.com/rv-camping-in-joshua-tree-national-park/

Steve Brown is an award-winning journalist and travel writer, the former president of the California Deserts Visitors Association, and host of Southwest Stories, a travel series for public broadcasting in southern California.