Rugged. Midges. That’s Scotland, right? Well, yes, but there’s a boat-load more to a little-known waterway which cuts a stunning course from the east side to the west. Dogs are welcome too. Ernie the Labrador took his owner, Lee Dickinson.

Day one must-do: Learn to drive a boat. A world of water awaits after a half-hour lesson.

Scotland. Country of contrasts. Diversity from coast to coast at a boat’s pace. From the bays and castles of the east to the pristine west, through plunging locks and cloud-shrouded mountains, loch expanses and oak-lined arteries, past engineering marvels and chocolate-box villages, familiar inns and one of the world’s most distinctive taverns.

Yes, Scotland’s got it all. And as we approached Loch Ness at the start of a cross-country cruise, its tips and troughs could have been a monochrome clue to a voyage of such variety.

Gliding through Loch Dochfour, as an angler swept a line over its lustre, ahead the UK’s biggest freshwater volume frothed at a grayscale horizon. Its black depths white-tipped. Almost a mirage among the serenity.

Loch Ness seized control with a sway of our 34-foot-long cruiser as the shoreline shrank in awe.

It was an exciting, hour-long trip to Urquhart Bay spent trying to keep the boat between 45 degrees and head-on into waves reaching four feet. That’s choppy even for Loch Ness, but the baptism of fire for a newbie boater set us up for the week ahead and everything the 60-mile canal delivers.

Day two must-do:  Hunt for Nessie. People have devoted their lives to this and found nothing, so good luck. Either way, it’s 23 miles of wonder. 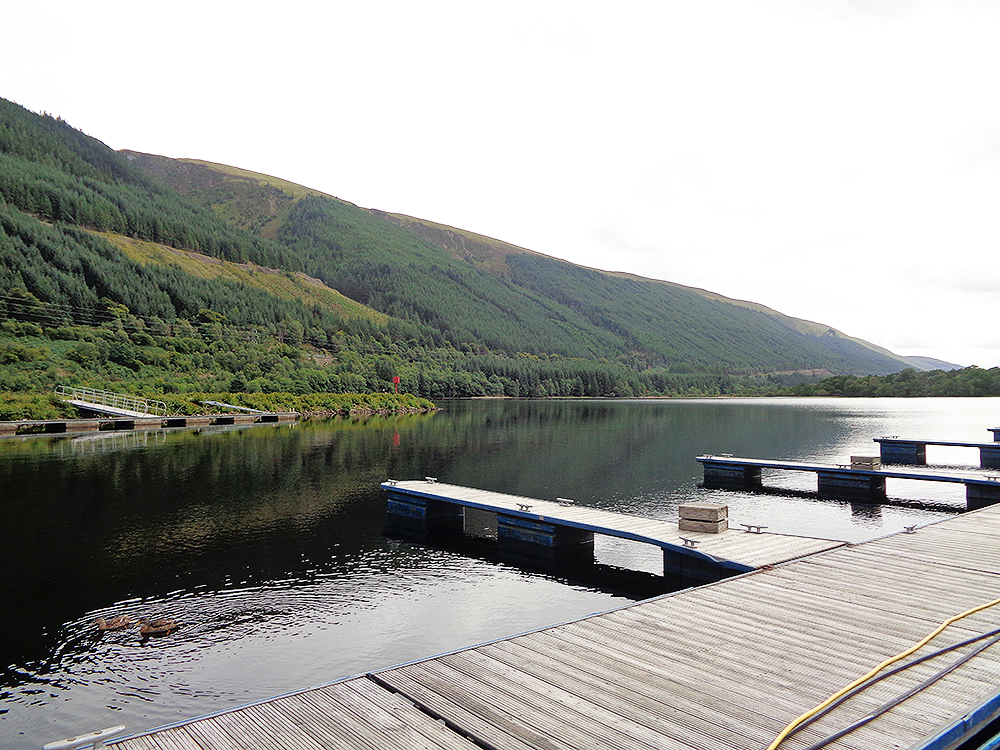 There was chatter about the previous day’s conditions, with a couple who live on their boat saying the waves were the worst in months, adding: “and we’ve been out at sea”. My partner clutched a sick bowl in readiness and nodded. Ernie was too scared to move far.

That day was even worse, someone said, so we watched boats leave before risking it when none return.

There were no flailing sailors during a choppy but calmer two hours to Fort Augustus, where boaters navigate by the church spire to reach the sort of village used for jigsaw puzzle pictures. The canal cleaving it seems to irrigate a digitally-enhanced lushness, and the five locks to the top adorn a place they could put in the dictionary under “quaint”.

Basic fitness is needed for the hour-long lock process, and a tolerance for tourists’ cameras and questions as the boat is heaved along, using paths with a perilous plunge inches away. I loved the filming so much, I provided special footage of a boat crashing into the lower lock’s wall, complete with lock-keeper’s pitying, loud-hailer commentary.

Once through the locks, you can relax for the night. There are attractions including the canal centre and its homage to the waterway, great fish and chips and two dog-friendly pubs. Sorted. 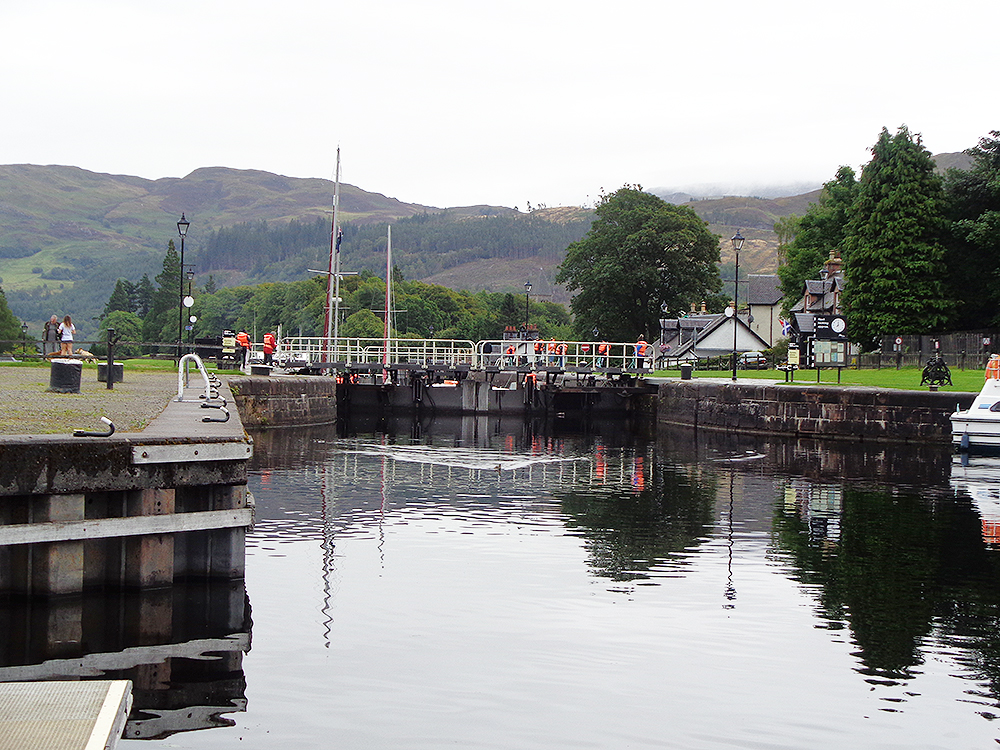 Day three must-do: Laggan Avenue. Try to stop staring at the scenery or you might crash on this intimate section of tree-lined bliss.

Fort Augustus refreshed us for the cruise ahead and more locks at Kytra and Cullochy, which lead to Loch Oich. At only five miles long, it’s a contrast to Loch Ness, and offers stop-offs at the Seven Heads Monument and Invergarry Castle, where dogs must stay aboard. Love us, love our dog, so we sailed on.

The next section’s Laggan Avenue, where nature the artist moves in and lets loose with her palette on a tree-enclosed gallery with hints of the mountains beyond.

Take your hands from the wheel here to manually close your dropped jaw, and for photos of scenery almost close enough to touch.

Laggan Avenue’s only problem is it’s too short, but the Caledonian Canal soon has another surprise. It opens into Ceann Loch, where mountains like 3,000ft Ben Tee keep their distance and let you gape at their majesty from the pontoons. Berthing is stern-on, so we could open the back door for Ernie to come and go. Slowly, as if revived by the beauty overload, he was gaining his sea paws. 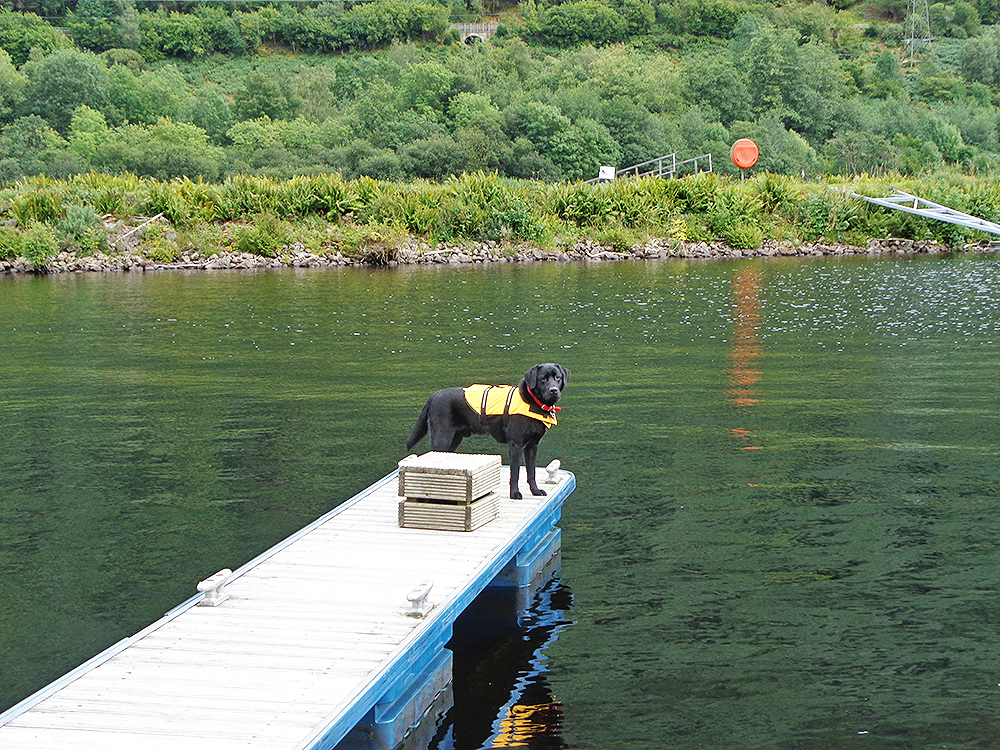 You can stay overnight and drink at the amazing Eagle. More of that later …

Day four must-do: Fort William. Venice is arguably more romantic and has more gondolas, sure, but none of them go to 2,000 feet…

If the Eagle doesn’t fuel you for day four and the last leg of the outbound journey, nothing will. Ceann Loch opens into Loch Lochy, supposedly home to another monster, Lizzie. Maybe they’ve over-egged the gullibility pudding with this one, because she’s never caught on like Nessie. At almost as long as Loch Ness at 20 miles, it’s easy to see the similarities, and the attraction of another money-spinner.

The mountains begin to rise alongside the beauty of Loch Lochy on the approach to the Nevis Range and the last set of locks on this leg. A stretch of fine brown trout fishing then leads to the foot of Ben Nevis at Banavie Locks. It’s known as Neptune’s Staircase, but you can’t go through this flight of eight locks in a hired holiday cruiser, so you’ll have to content yourself with the attractions of Fort William. Among them is Britain’s only ‘mountain gondola’, which glides 2,000 feet up its eighth highest peak, Aonach Mor.

Try the Ben Nevis Distillery, too, one of the oldest licensed such places in the country.

You can do all that and rejoin civilisation. Fort William, the largest town in the western Highlands, offers everything needed after four days on the water.

Part of the joy of reaching Fort William and one end of the Caledonian Canal is doing the 60-mile journey again, in reverse. Your holiday is far from over, and the change of direction gives a new perspective. You even get to redo some of the things you loved so much the first time.

If anything’s worth a second look it’s the Eagle bar, and we reached it again after four hours on Loch Lochy.

An inn’s already a design classic when its canvas is the inside of a 200-tonne Dutch barge, but the owners have cherried this cake with decor of distinction. The floating pub’s also dog-friendly and does great food. The barman offered us a half-price seafood banquet, but we had our eyes on something else, other than the amazing interior.

Knowing the route on return means you can absorb more of the scenery. There was lots of it on a packed day six which took in Laggan Avenue, Loch Oich, Fort Augustus and more than two hours of Loch Ness. You can do whatever sections you like on any day, as long as you’re through the locks before closing time. A busier day five to, say, Fort Augustus, would leave a more relaxed penultimate day than ours.

We pushed on to the welcoming, now-familiar Urquhart Bay and its ancient monument. Scotland’s arrayed with fortresses, but Urquhart Castle’s iconic. It was captured by the English in the 13th century, but was the only stronghold to thwart them in 1332 after Robert the Bruce’s death. Now it’s one of the country’s most visited monuments, and nearby Drumnadrochit village offers full immersion in the Loch Ness monster legend.

Restaurants provide free taxis from the harbour, which is a relaxed overnight stop before heading back onto Loch Ness to return the boat. A sad moment, but there’s still one attraction to come …

Day seven must-do: Inverness. ‘The capital of the Highlands’ is an atmospheric river city with great food and a rich history.

Take the boat back then head into a city small enough for most things to be reached on foot while marvelling at its list of attractions. If you’re not castled out, there’s a fine example here, and there’s more history to be explored at Culloden battlefield and the Bronze Age remains at Clava Cairns.

Leakey’s Bookshop, Scotland’s largest second-hand literature store, is so stunning it has to be witnessed to be believed. Fitting, that, for the final chapter of such a grand adventure. 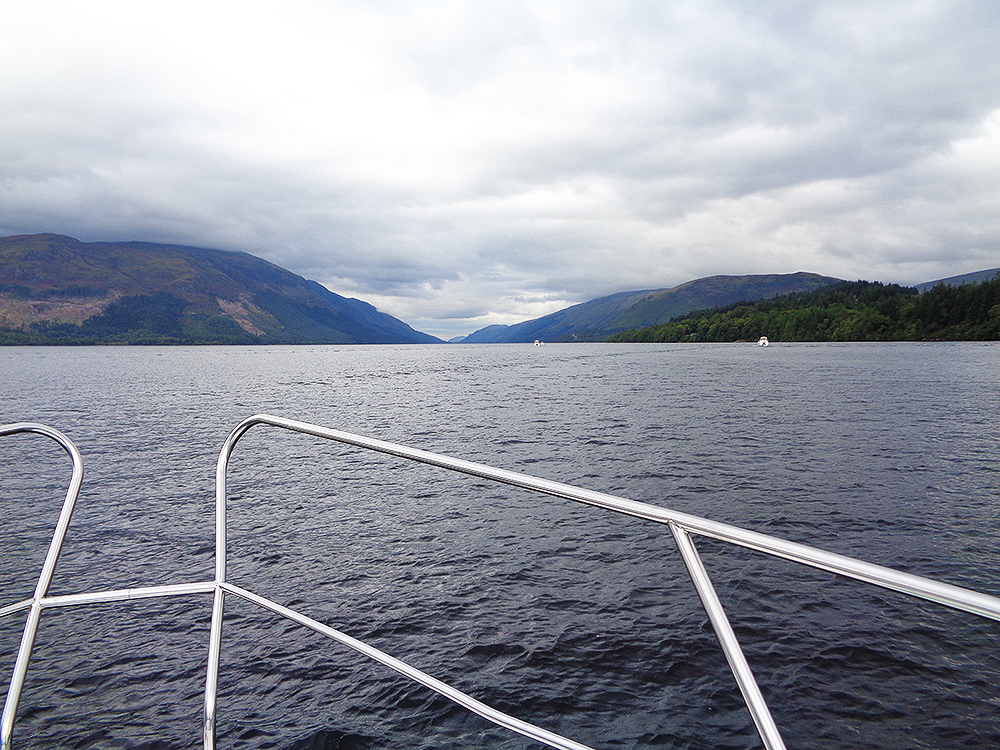 Logistics, Prices and Need to Know:

Prices for Caley Cruisers’ Eriskay-class boat start at £837 and rise to £1,481 at peak season. Mooring and electricity fees vary along the way; ours were included but the power charge is typically between £3 and £5 for the night. There’s fuel too, which totalled £94. A £500 deposit was taken, but only to cover wilful damage or excessive mess. Any accidental damage is covered by insurance included in the price.

It’s not quite the dread of a driving test, but the half-hour lesson before taking sole boat control has some sweaty-palmed parellels. We had to park, reverse park and U-turn. A safety video starring Blue Peter legend Peter Purves prepared us for a tutor who ran through the basics. At such low speeds and with only forward, reverse and neutral to choose from, how hard can it be? The trickiest parts are your first locks and the parking but, after a few attempts, it’s simple. Remember to keep it slow and use bow thrusters if they’re available.

The Eriskay-class boat we hired is the second smallest in Caley Cruisers’ fleet at 34 feet long, which still makes it big enough to sleep four in a double bed and two bunks. The cabin table converts into a bed which can sleep one more, but five will be cramped. There’s everything aboard – a fridge, heating, full-sized cooker, shower, toilet and TV with DVD player. You can hook up to the mains at many overnight stops but, if not, there’s enough power for a night or two, or you can recharge the batteries through the engine.

The 60-mile Caledonian Canal links Scotland’s east and west coasts, from Inverness to Fort William. It was started in 1803, after being devised by noted engineer Thomas Telford, and construction took 17 years. Telford wanted a 20-feet-deep waterway, but the new canal’s depth was only 14 feet. He got his way when it was reopened in 1847 after a three-year project to add the extra six feet. It’s recognised as a feat of engineering, not least because of the mountain terrain it traverses through 29 locks.

Lee Dickinson is a copywriter at wordwisewebltd.com and a Chartered Institute of Editing and Proofreading advanced professional at bookediting.co.uk.