Beirut through the eyes of an enthusiast

There are cities in this world which simply cast a spell over you. The sound of the name alone makes you want to pack your bag and just go. An inexplicable longing to either visit for the first time or to relive memories from previous sojourns takes hold and won’t go away until you follow the siren call. Lyrical thoughts, maybe, but nevertheless true  as I can testify from my own experience. The name of my temptress is Beirut. Even as I write this, I see the elegant curve of the Corniche, the formation of Pigeon Rock and the glitz and glitter of the soukhs beckoning before my inner eye. And I know, it’s time to go back soon, meet three of my dearest friends and, together with them, revisit the places I like best in Beirut. 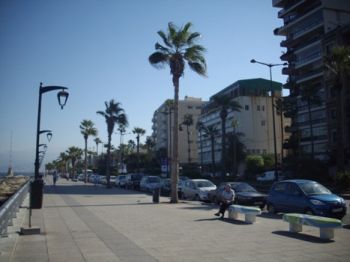 Pigeon Rock is probably the most famous landmark of Beirut. The rock formation, often compared to Capri, rises out of the water and is an unforgettable sight at dusk, when the sun sinks over the sea and the last rays pour through the opening.
Close to Pigeon Rock is the Beach Club, a Beirut institution. My friends tell me, that several of the members have come here to relax, swim, sunbath, eat,  socialize  and play back gammon  for decades, each and every day, even during the war. Its peeling paint and faded charm are not attractive enough for the average tourist who is not to be found here, it’s the true Beirutis and their  friends and guests who come here and make you feel instantly welcome because you are a friend of a friend. The ladder leading down into the sea is a bit rusty, the chair and lounger covers are a bit worn and torn, the chairs and tables in the restaurant are a bit rickety, no matter, it’s the atmosphere which counts, not to mention sea food of the finest quality. 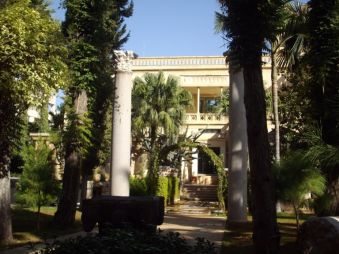 The Lebanese are people who love company. Nothing better than to sit for hours in cafes, meet up with friends, gossip, sip coffee, smoke narguiles , eat (a lot) or play back gammon. Then move on to the next, until it’s time to party the night away.
My favorite Café is the Café Hamra in Hamra Street which has opened just over a year ago. What was once a town house has been demolished and the modern café has been built in its place, but the magnificent garden and courtyard has been kept and is now converted into the open air part of the café and restaurant which serves traditional as well as French cuisine. 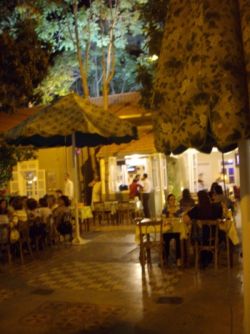 Another insider restaurant with a fascinating history is Al Falamanki in the downtown Ashrafieh district. Several rooms as well as a leafy terrace invite to dine and socialize. Admire the many photographs, depicting the history of the founder who became a close friend of Hollywood stars and other celebrities of the 50s and 60s.
But it’s not all wining and dining. Museum fans like myself will enjoy the Mouawad Museum with an eclectic private collection of works of art which reflect the personal taste of one single collector. Wood carved ceilings from Syria, Greek and Roman statues, Italian mosaics, Persian carpets and stunning pieces of jewelery  belonging to the current owners, the renowned goldsmith and diamond merchant family Mouawad. All housed in a beautiful neo classical villa with wonderful gardens. 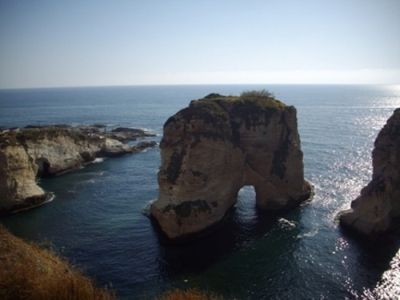 As far as upscale shopping is concerned, no better place to go than the Beirut soukhs. The original soukhs were nearly totally destroyed during the war, but like Phoenix from the ashes, the new soukhs, sparkling  with glass, crystal and marble have arisen. No international fashion house which doesn’t have an outlet here, next to the fabulous Lebanese designers who are making a name for themselves world wide. 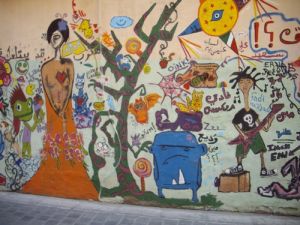 I didn’t have much of a chance to experience the nightlife on my last visits, that’s a treat reserved for my next trip. As is the stay in one of Beirut’s best 5 star hotels: The Four Seasons.
Yes, there is a darker side too. Yes, there are plenty of burned out buildings and ruins, bearing witness to 30 years of terrible civil war and several serious incidents since. Yes, there is uncertainty and a certain electricity in the air, because, as my friends always say: Everything can happen in the Lebanon. But, what prevails is the sense of defiance and sheer joie de vivre, today it’s fine, let’s enjoy today. Maybe it’s that spirit which draws me back again and again.