The north-western town of Bahir Dar essentially serves as a base to explore the monasteries dotted on the islands around Lake Tana, and to visit the majestic Blue Nile Waterfalls. I did take a brief walk up the main road from our hotel and spoke to a student who interestingly said that the town’s university attracted European and Western students there to study public health, HIV, and anti malaria measures.

The atmosphere was very friendly and safe  – Ethiopians love to stop and chat and are generally very pleased to see you and welcome you to their country. There was no ostentatious poverty along the main road, that said, go a few roads back and this changes a little.

There were numerous groups of boys playing predominantly pool and to a lesser extent table football. The main trade is stalls normally specialising in either sandals, socks or other types of clothing or household items and a multitude of small grocery shops and coffee stands. 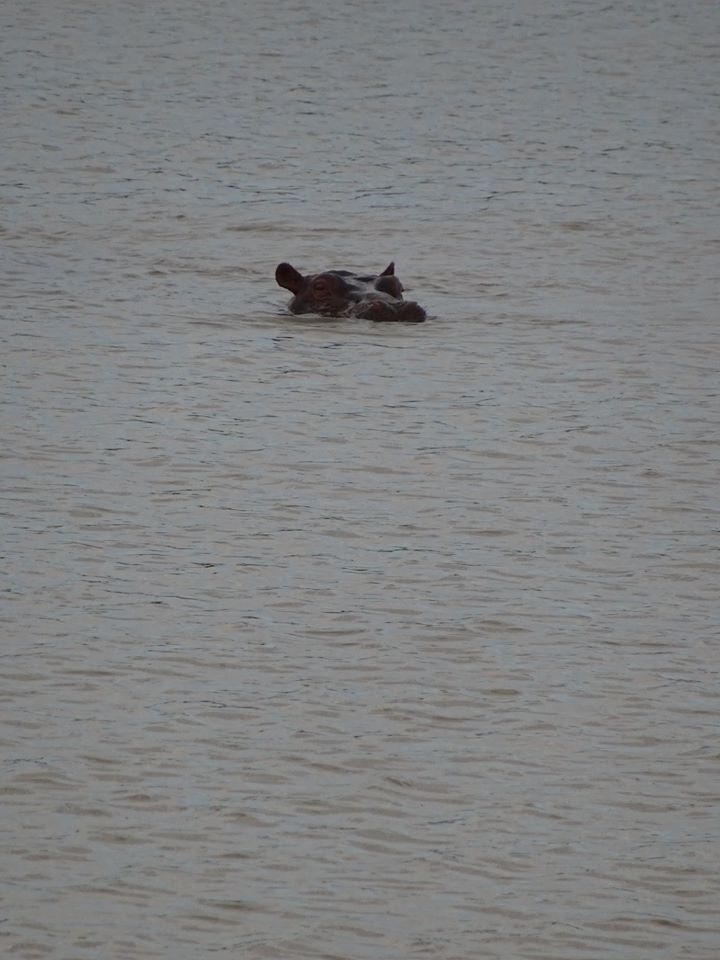 The forty five minute cruise across the vast Lake Tana to the monastery we visited was pleasantly punctuated by the sighting of a hippo that came above water just long enough for me to take the above shot, as well as a squadron of pelicans. 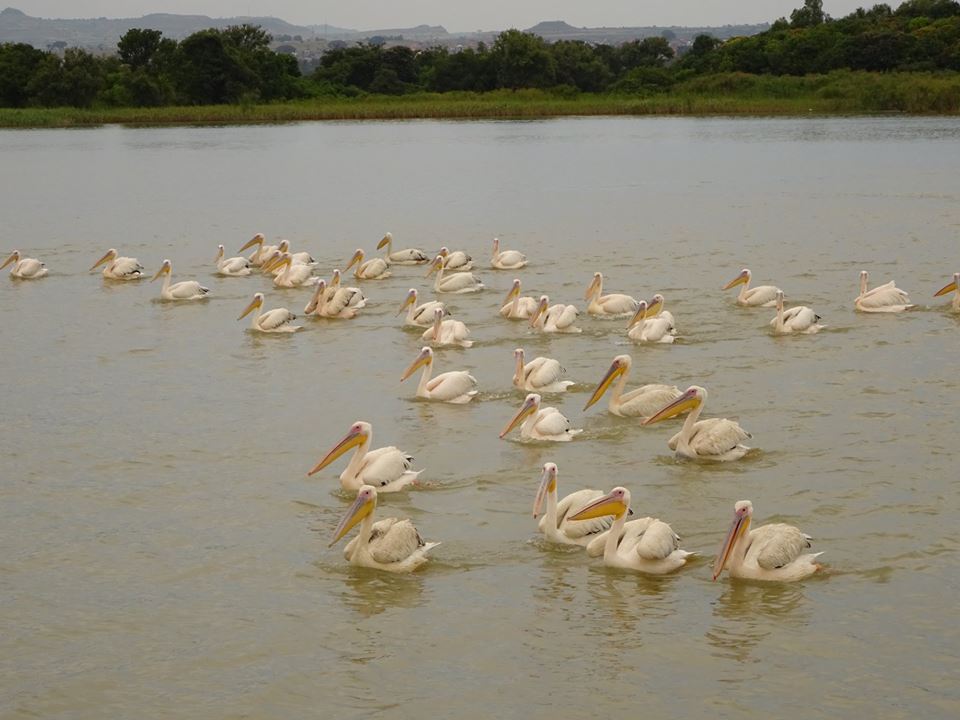 The pick of the monasteries are located on the Zege Peninsula, and the best one is the Ura Kidane Meret. Of the stories we were told by our guide the most memorable was of the cannibal who apparently ate 76 people but was (some might say inexplicably) forgiven by St Mary when he encountered a leper and agreed to give water to him. The frescoes, murals and paintings that decorate the inside of the monastery are a little dark in content in places but nonetheless provide a fascinating insight into how Christianity was taught as well as displaying the intrinsically Ethiopian humour, wit and colour used to do so. The scenic walk up to the monastery and more so at the bottom around the jetty area is home to beautiful vervet monkeys. 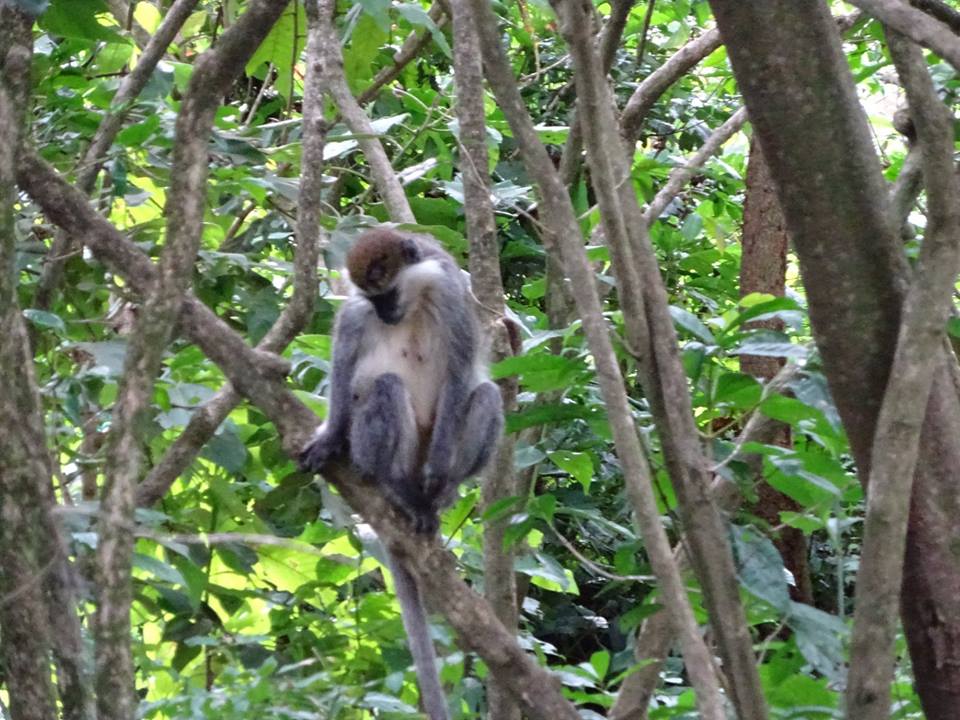 The bus journey to the Blue Nile Falls through small villages and Ethiopia’s lush, green countryside with rolling hills and fertile farmland was a great experience as along with the outstanding scenery, the people, and children especially are pleased to see you  – this is manifested in their running alongside the bus, waving and smiling warmly. The farming methods are very old world with donkeys used to transport goods and cows to plough the land in places. Similarly, on both the roads and the walk up to the falls there are cows and goats being herded.

As mentioned Ethiopians love to chat and I had a conversation with a girl called Juusu who was selling scarves and handicrafts to support her three brothers and three sisters. I also spoke to a young lad who lived only with his younger brother who I ended up buying a football for. The ubiquitous topic of conversation being football, specifically the eternal Ronaldo / Messi debate and his favourite player being Paulo Dybala. 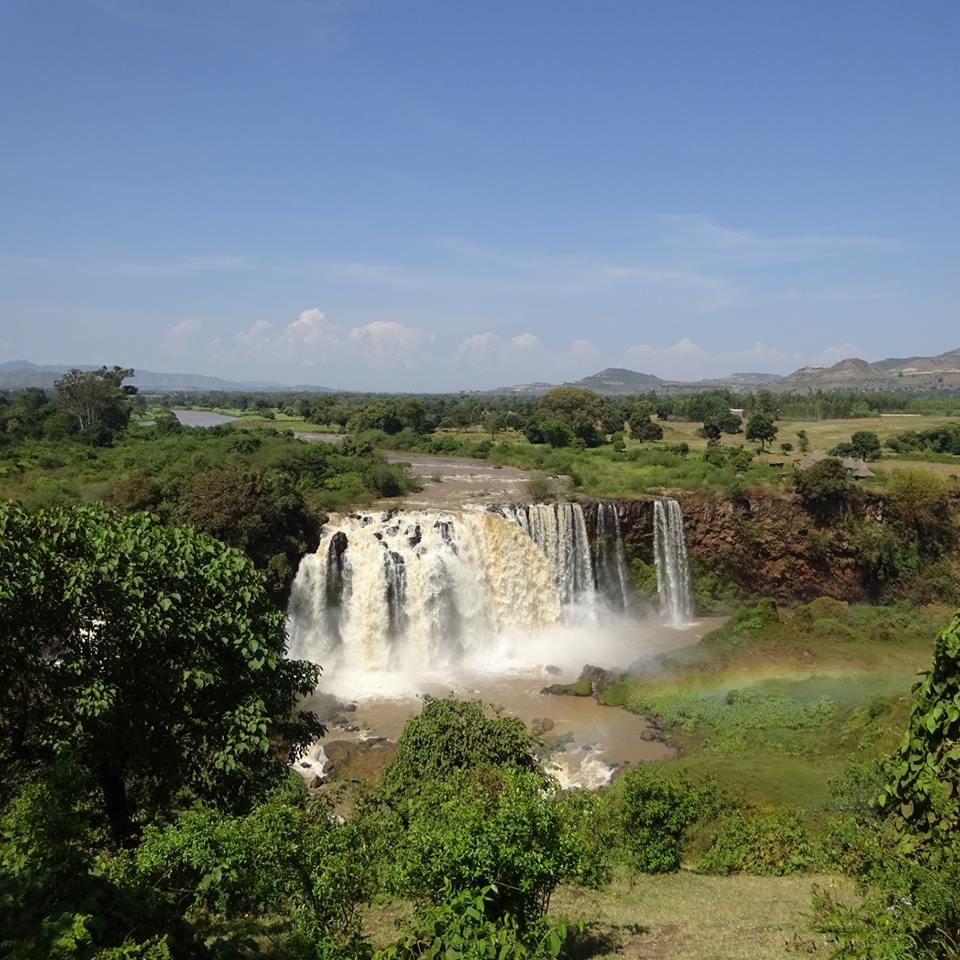 I will let the photographs of the falls here speak for themselves. The scenery and countryside as you can see is magnificent and is quintessentially African. The round trip of the walk is about two – three hours but not particularly taxing and well worth it for a slice of rural Ethiopia. 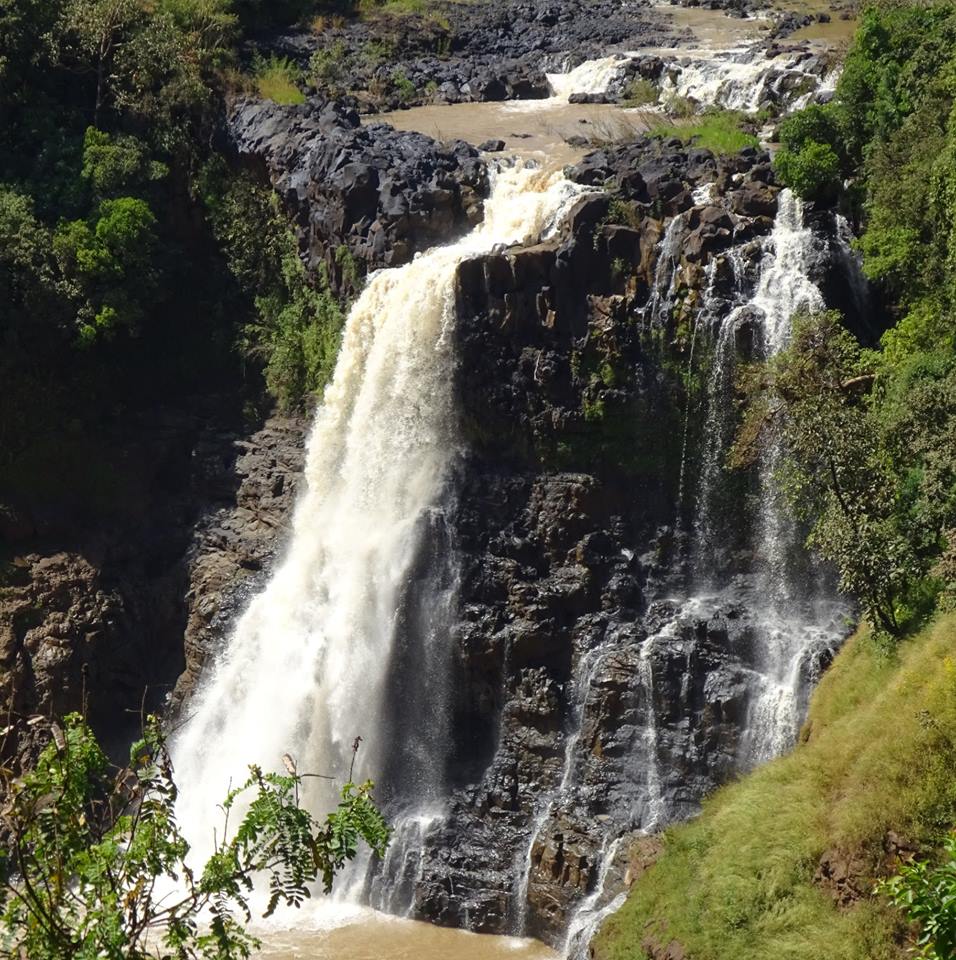 The next stop was the northern city of Gonder which was the country’s capital during the 16th and 17th centuries and is home to Fasiladas Palace, Swimming Pool, and the beautiful Debre Berhan Selassie church – one of Ethiopia’s most famous. The road trip from Bahir Dar was one of the more pleasant we did, being largely flat and again taking us through rural Ethiopia. As mentioned, farming methods are very traditional – I don’t recall seeing a tractor at all during the two week duration of the tour and our guide reiterated that life is hard.  Corn, wheat, and maize are the main crops. By now we were well used to children running from the fields and surrounding us and the bus whenever we stopped and usually asking for pens. I made a mental note to buy some.

Gondar is a particularly picturesque town. The below is the view down to the town from our hotel. 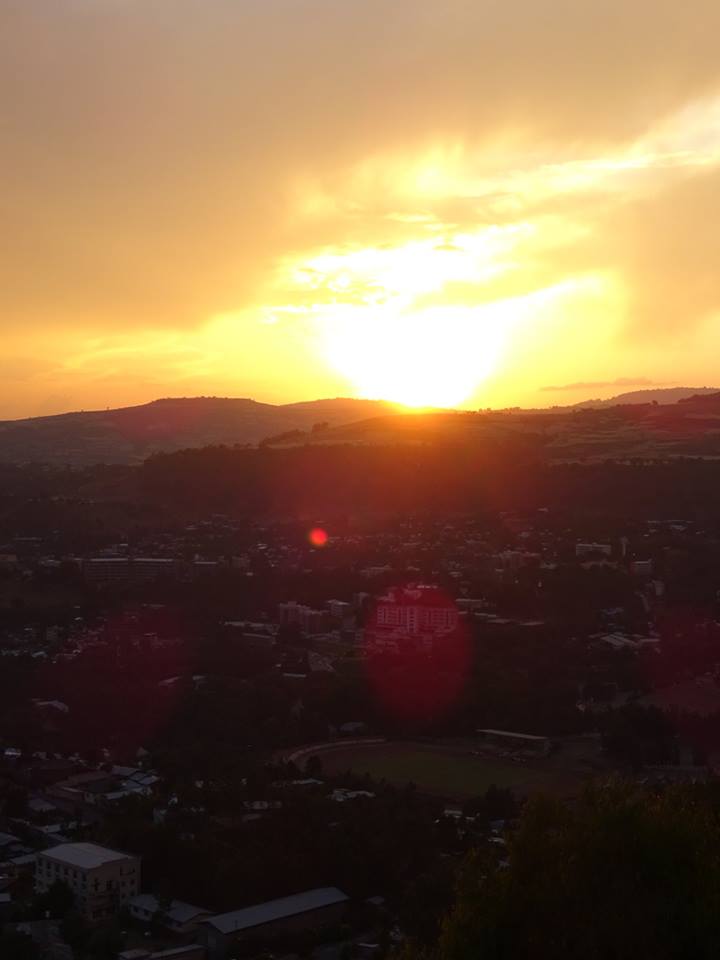 Of the above mentioned sights we visited the Swimming Pool (below) which is tranquilly set amongst leafy woodland, although it was also apparently used as a torture prison by the Derg regime during their time in power from 1974-1987. 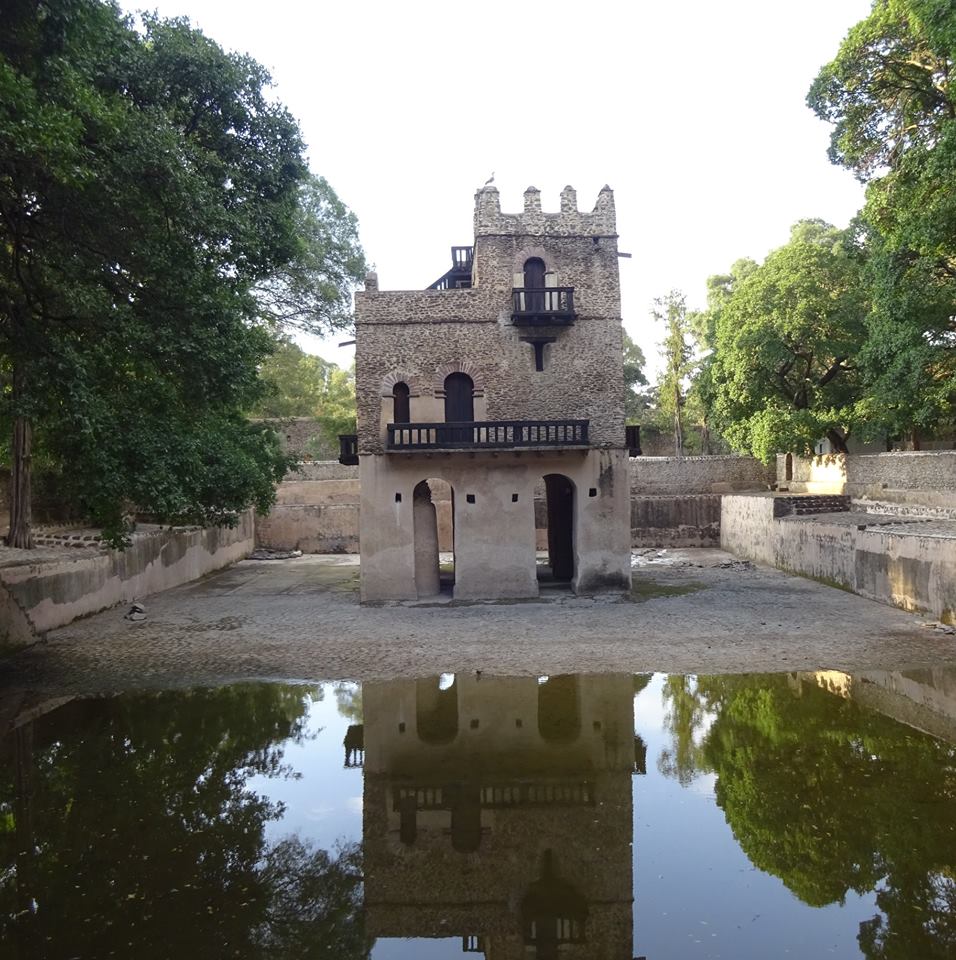 Fasiladas sprawling palace is only relatively recently restored  since the end of the civil war in 1991 and could equally be from post Tudor England. 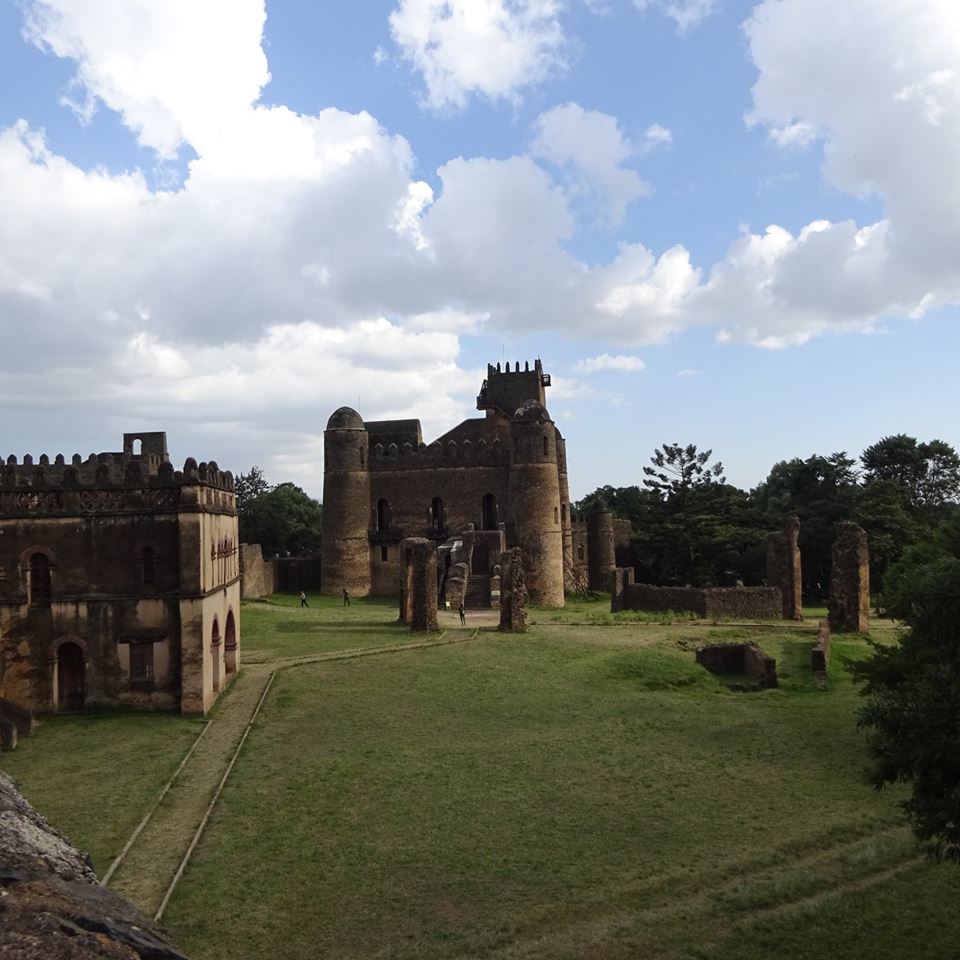 The Debre Berhan Selassie Church continued the theme of some of the inside artwork of Ethiopian churches and monasteries being a little violent and edgy in concept – the devil being quite prominent in this particular case. Women were obliged to cover their heads, arms and legs and use a separate entrance. The church is located in a beautiful setting, surrounded by trees and wildlife and is in itself attractive in its simplicity. 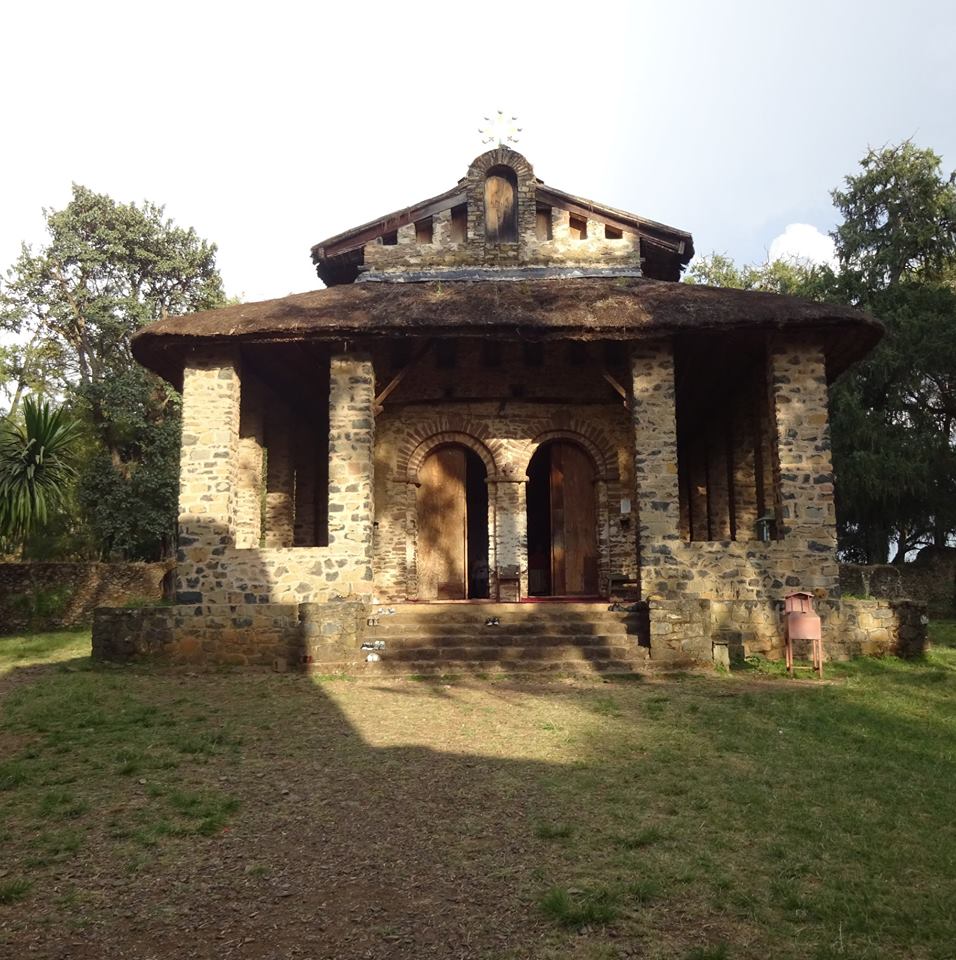 I did have a walk around the town centre of Gonder and a little like Bahir Dar, it felt perfectly safe and welcoming but here just going one or two streets back off the main drag and it’s easy to see the difficult economic and social conditions that many Ethiopians live with. That said, locals are nonetheless pleased to see you and warm with it.