As Sweet As Apple Pie

Apple pie goes back a long way. The first Dutch recipes appeared in the late 1400’s. That’s way before Rembrandt van Rijn and all those old masters. In Amsterdam, Dam Square and the Single existed, but none of the other main canals had even been thought of. Apple pie beat them all to it. Of course it was a little different then. The case or ‘coffyn’ as it was charmingly was no more than a casing – a container of whatever was within; a way of carrying it around. Because there were no baking pans, the crust was probably – well crusty and horrible. It’s said that baking time was measured by the number of prayers a person had to say until a pie was ready. But gradually, with changes to cooking methods and ingredients, pastry – and the pie as we know it – came into it’s own.

Nowadays every self respecting cafe serves Hollands appeltaart even if it’s not on the menu. These pies are towering edifices, a cake-like crust at the bottom and sides shoring up chunky bits of apple – visible through a lattice work of golden brown pastry on the top. It’s the cinnamon and lemon juice that makes Dutch apple pie different to it’s English and American cousins. It’s often warm and nearly always served with a great dollop of whipped cream. But with every bar, bakery and cafe offering apple pie how do you know if the one you’re getting really is as good as the one your grandmother used to make? 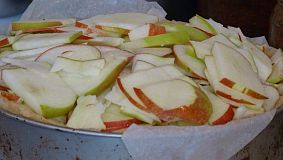 I decided to test my tastebuds, and follwing my nose, scoured the city for an appletaart Amsterdammers could truly be proud of.

When Bill Clinton visited ‘Papeneiland’, a brown cafe on the Prinsengracht he took an apple pie home with him. Apple pie fit for an ex-president? Seemed like a good place to begin my search. It’s made on the premises the owner told me. What, in his opinion, made a good apple pie? ‘We use lots of apple, lots of apple’, he repeated – because the apple sinks when cooking, and if a recipe says to add a pound of sugar, you should always add a bit more, and we put a crust on top – a closed crust, not lattice like all the others – that helps to stop the apple slumping. Clinton made a good choice. The pie was sweet – and I’m not just talking about the sugar.

But when I asked my Dutch friends, all of them said Winkel 43 on the Noordermarkt was the place to get apple gebak in Amsterdam. As I took a seat on the terrace I noticed that all around me people were eating thick wedges of apple pie, whipped cream cascading over pastry like a waterfall shimmering over rocks. Large, thick slices – no, not slices, lumps, of apple – firm but still soft, and sweet but with an edge. It was warm, so the cream slipped and slid, it was almost a work of art. This was seriously good. I asked again– ‘what makes a good apple pie’. The staff looked at each other. ‘Don’t tell her – its a secret recipe’, said the be-stubbled barman. The young waitress laughed, thought for a moment, and then said – ‘our pie is just simple, and the pastry is nice and crispy’. They’ve been making pies from the same recipe for 35 years! Obviously they’re doing something right. On market days slices of pie are lined up in rows on the counter. They sell like hot cakes. Seriously – Winkel 43 sells 100 pies – that’s 600 slices – every Monday and Saturday and another 150 pies during the rest of the week. That’s a lot of apple tart. 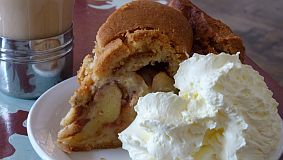 At Latei, on the Zeedijk, a retro cafe, where everything has a price-tag – you can buy the table and chair you’re sitting at if it takes your fancy – we tasted another monster apple pie – this time studded with walnuts. The chunks of apple were huge – maybe even a little too big. Again they make the pies themselves, and of course, they too, have an opinion on what makes a good apple pie – ‘lots of apple and not so much pastry’.

At De Laaste Kruimel the chef made an appletaart right before my eyes. The apple slices were as broad as the apple but paper thin, and still wearing their peel when he pressed them down into the pastry case, ramming them in, using his body-weight to wedge in more and more pieces – ‘Elstar,’ he said – it’s got to be Elstar’. He leaves the peel on simply because it looks good – tiny specks of red highlighting the pale lemon-green of the cooked apple. No top crust – the apples do it for themselves. Delicious. 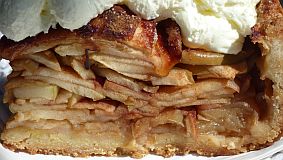 Villa Zeezicht with its cuckoo clocks, chandeliers and even a stuffed stag’s head also serves a great slab of appeltaart; chunks of apple, firm, but not too sweet, and doughy but somehow still crisp pastry. The price – at Euro 5 a slice, this was the most expensive pie I tasted – was a little harder to swallow.

All of these apple pies were more than good; all made on the premises with love and care. To be honest there wasn’t much to choose between them, but it was great fun trying to reach a decision. The Dutch government is campaigning to encourage people to eat more fruit. At least two servings a day. Dentists tried with the motto ‘snack sensibly, eat an apple’. The campaign bore little fruit. Maybe they should’ve tried ‘eat a piece of apple pie’ – success would be guaranteed.