Days nine and ten were essentially long bus journeys with a stopover in Mekelele to take us to Lalibela, our final destination of a fantastic trip.

Ethiopians are rightly very proud of being the only African country never to be colonised by a European power. While Britain and France maintained largely cordial relations, the most famous attempt at invasion was carried out by Italy in 1896. They were however famously defeated by the Emperor Menelik who, admittedly with superior numbers but by no means superior equipment, comprehensively defeated the under prepared Italian Army at Adwa. The Italians did return and occupied Ethiopia between 1936 and 1941, however the occupation ended due to the start of the Second World War and in part due to Britain’s offer of assistance to Ethiopia on the Sudan-Ethiopia border. This small memorial to the 1896 battle is in Adwa’s town centre. 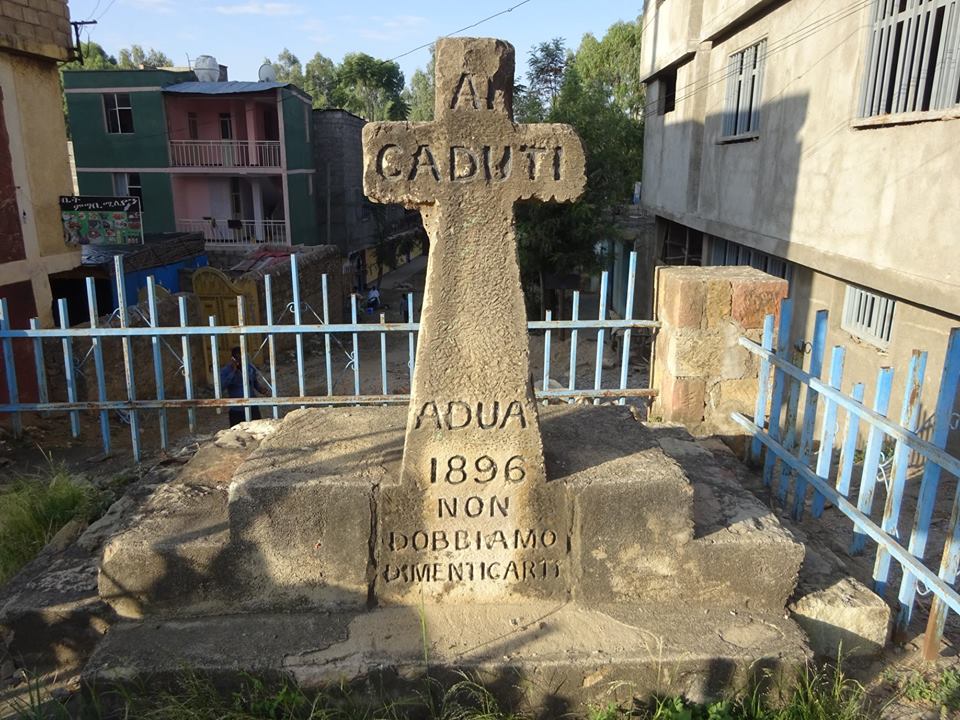 A couple of hours outside of Axum we visited Yeha – a very small town considerably off the main road, and home to a live archaeological site. The temple we visited there is currently being restored, a project being undertaken in conjunction with The German Archaeological Institute. There is also a vast palace being excavated and restored by local workers and German Archaeologists. 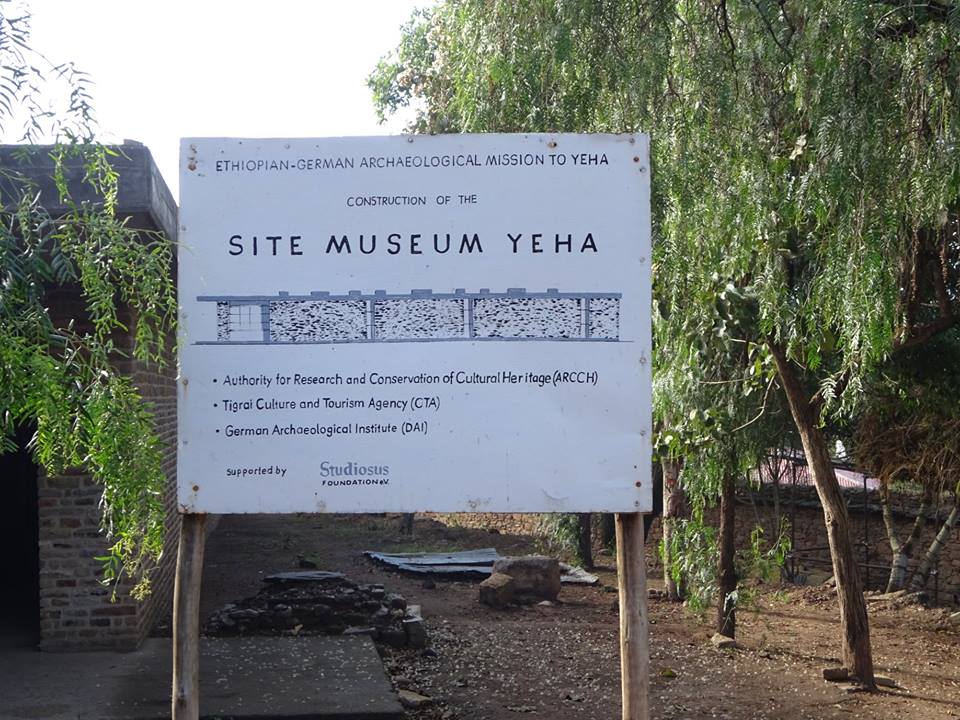 We also visited the, by a distance, smallest museum I have ever been to that was home to artefacts dating from the fourth century. The highlight of this inevitably brief visit was when a one thousand year old and another three hundred year old parchment were casually taken out of a leather holder from the back of the cupboard and shown to us. 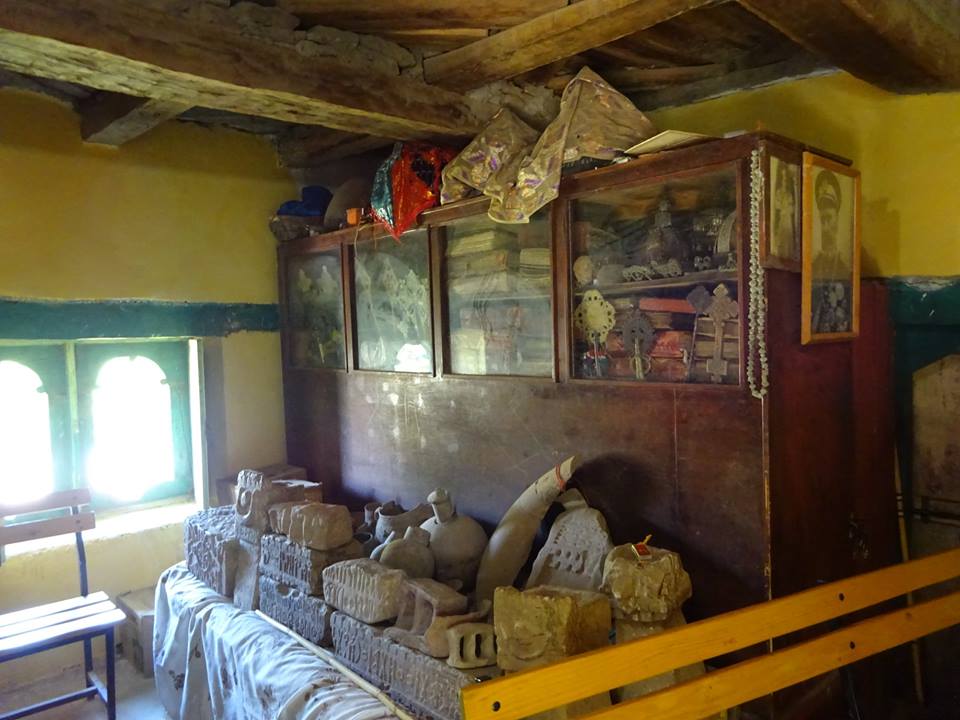 In the afternoon we visited a Rock Hewn Temple situated in a rural location twenty five minutes off the main road. To reach it we went through several farms and a handful of small villages. As ever, children, whenever they saw us even from a considerable distance away would run towards us waving, with beaming smiles on their faces.

The temple itself was incredible. The time, skill set, and manpower that it must have taken to carve this structure out of rock on the side of the mountain was incredible. There is conjecture over when the church dates from, with locals claiming around the fourth century but historians the tenth or eleventh. We were advised that for festival days as many as three to four thousand people will visit the church. Unfortunately the light inside was inadequate for good photography. 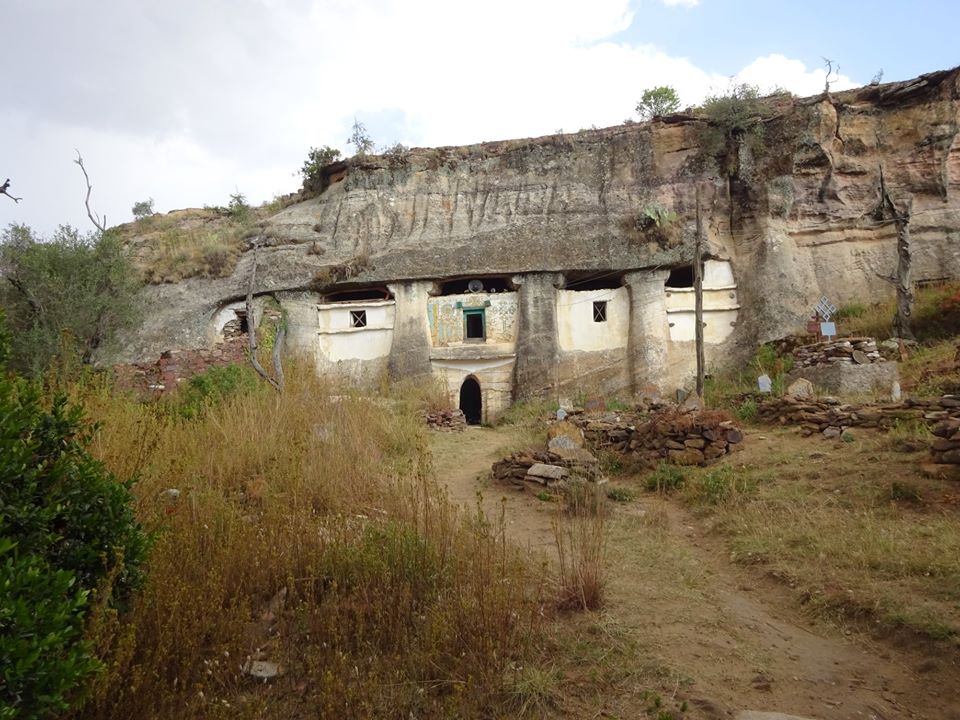 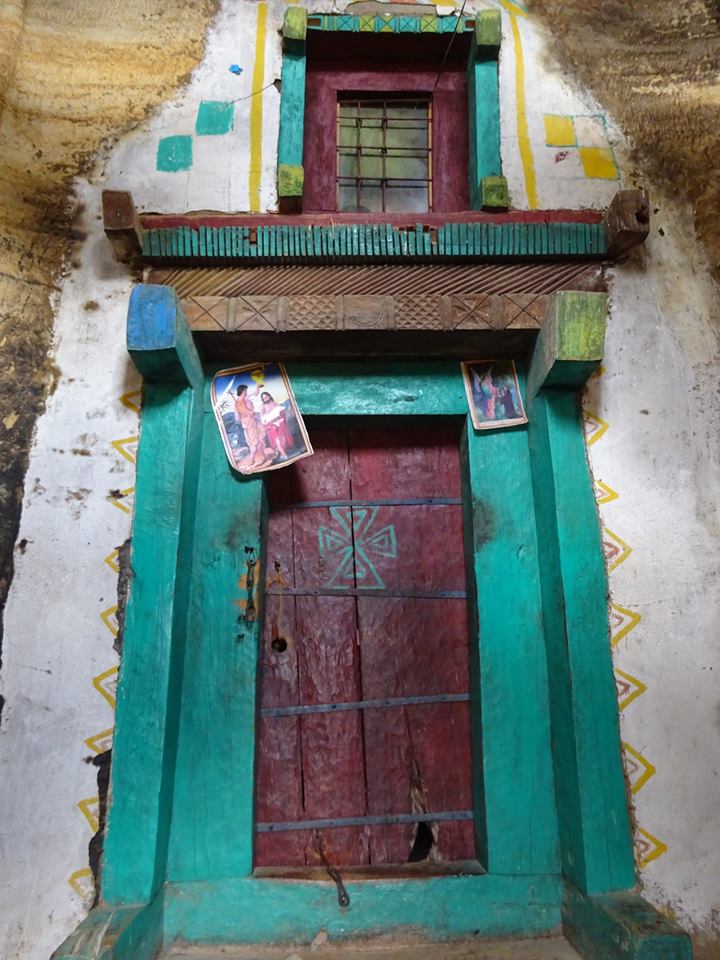 After an overnight stay in Mekelele the highlight of the next day was the camel market as below that we stopped of at on the road to Lalibela. The spectacular valley and hillside scenery en route was as ever punctuated by children surrounding the bus whenever we stopped. There was no malice at all. As mentioned wherever we went we were met with smiles and genuine warmth. 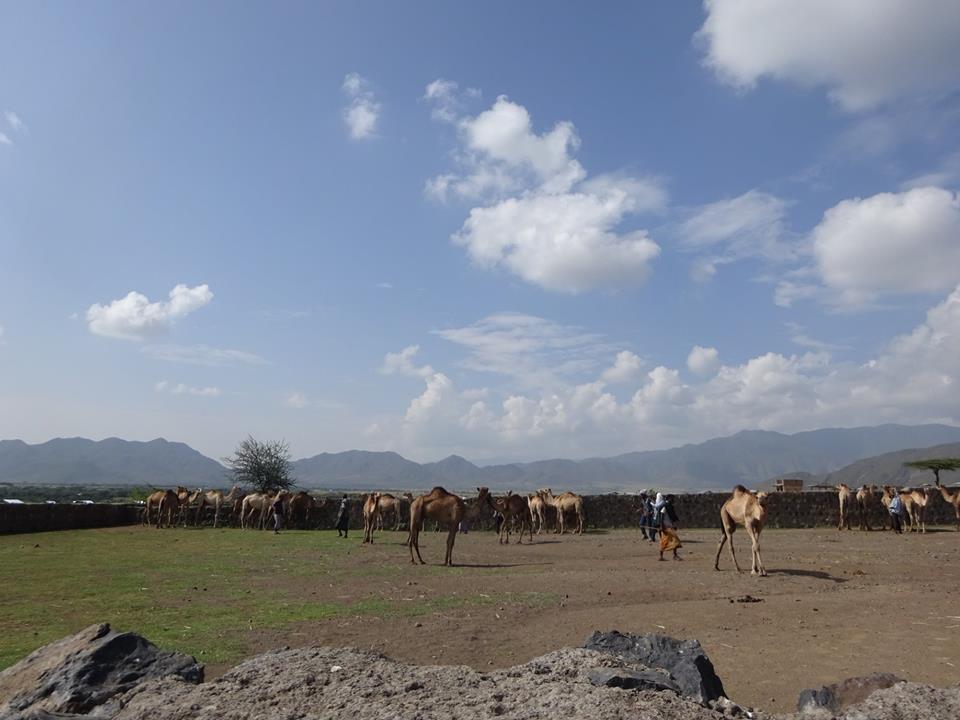 Lalibela is renown for its spectacular UNESCO listed Rock Hewn Churches. These magnificent buildings date from the 12th Century and are still in use as places of worship. The skill and craftsmanship with, one assumes relatively primitive tools, that it must have taken to construct the churches that are essentially calved out of the side of mountains is staggering. 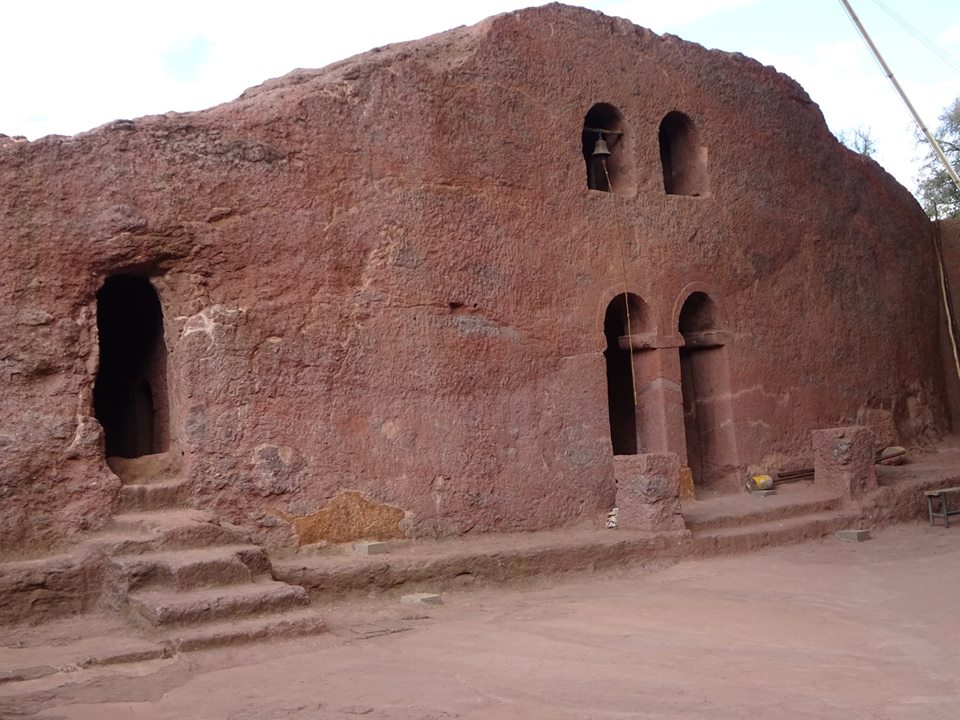 The Church of St George (the patron saint of Ethiopia as well as England) was particularly memorable and has been much photographed. My other personal highlight was the underground walk in total darkness to heaven via hell or just to heaven depending on your preference. I should also mention that around each church there are niches (below) calved into the walls where pilgrims would sleep for days on end as part of their pilgrimage. 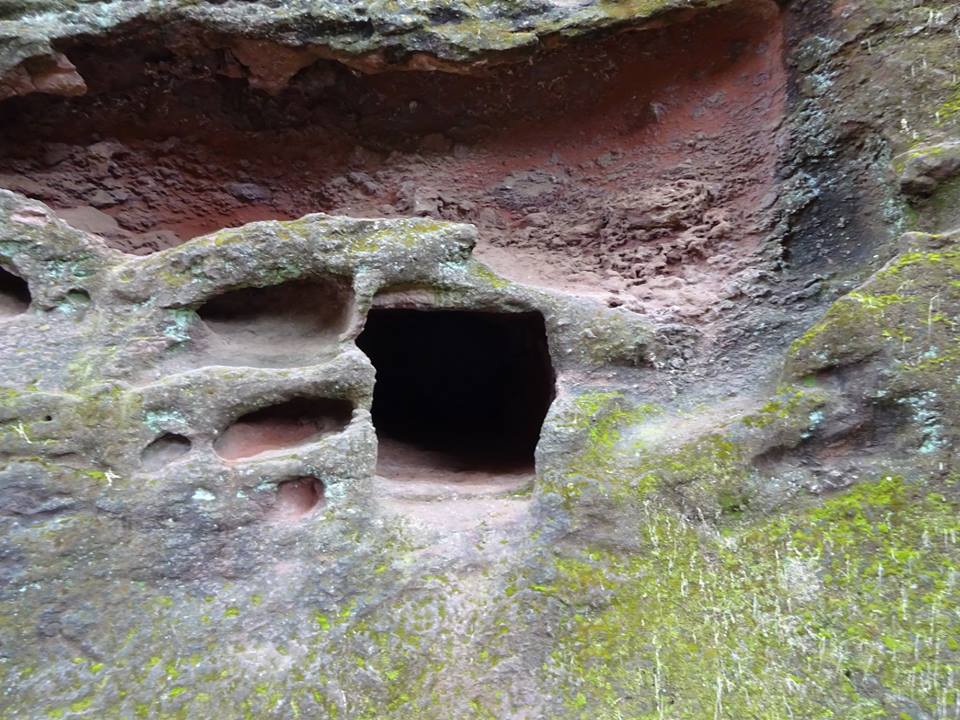 Although I personally felt a little intrusive at the time, it was a fantastic privilege to see women in traditional dress (white robes) taking communion inside the last church we saw. At the same time as this, the call to prayer was taking place outside with men also dressed in traditional white robes taking it in turns as their words echoed around the  the complex. Similarly, the communion was administered by priests wearing mitres, crosses and red and gold robes. Our guide explained that we should not feel intrusive and that our being there was indicative of the openness of Ethiopian people, and their desire for visitors to fully experience their country, religion and culture. 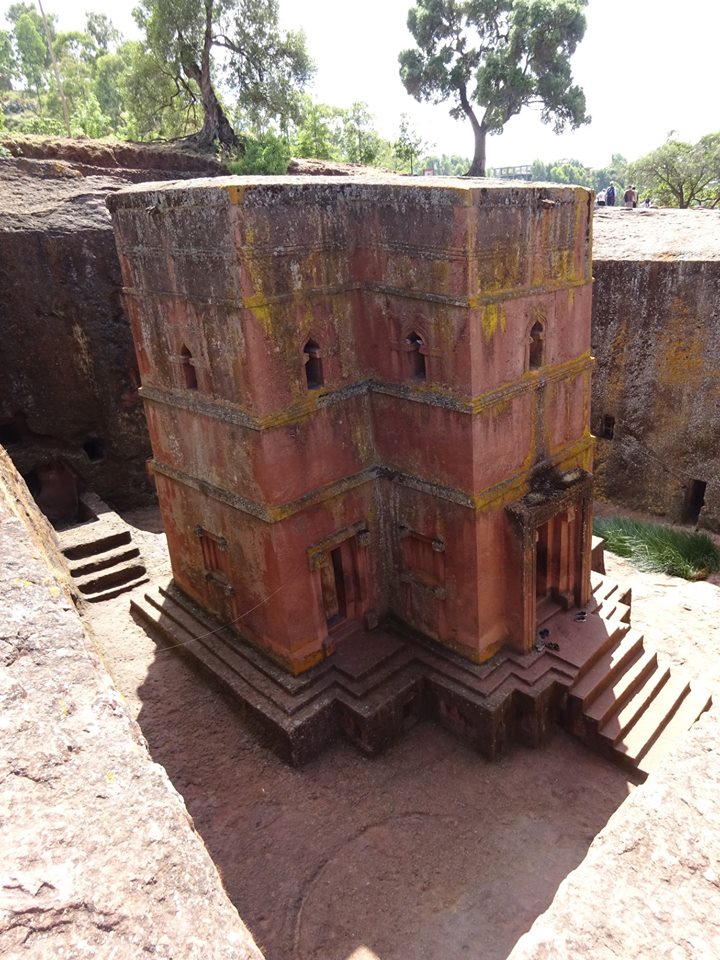 The Church of St George

And that was largely that. To finish with an anecdote that I think serves to accurately represent my time in Ethiopia and also its current standing, character of its people, and potential for the future.

Walking outside our hotel in Lalibela, a young lad of I would guess around eleven asked if he could clean my shoes. It was late in the day and I didn’t have time to stop just then, to which he said “what about tomorrow?” I replied that we were out in the morning and that I wasn’t sure about the afternoon. Unbeknownst to me this had apparently turned into a firm arrangement as when I went for a walk the next day at around 3.30pm in the afternoon he was waiting outside the entrance of the hotel.  So he cleaned my trainers outside a souvenir shop while I perused inside. When he had finished I asked how much and his response was, “as you wish, I am a student.” When I went to offer I believe one hundred Birr he pointed to the chunky Amharic  / English dictionary on sale in the shop. The shopkeeper explained that all students wanted that dictionary, and it became clear that had been the lad’s motivation all along.

Furthermore the Government has recently built forty-five new, free universities around the country, and that aligned to the evident value put on education by the country’s youth, there is real potential for Ethiopia to grow economically over the coming years when those educated reinvest their time and acquired skills in their homeland.

As a tourist destination Ethiopia has it all – stunning scenery, combined with history, archaeology, and a welcoming population. With improvements on the existing infrastructure which is already good in terms of hotels, restaurants and roads, one can see Ethiopia’s future being bright for her next generation; all the more so given the conservative estimate that only 5% of her heritage sites have been discovered, which is all the more reason to visit the country before it inevitably becomes a prime tourist destination.