Amsterdam’s Brown Cafe’s are said to be timeless, so I set out to discover how good a 1969 guide book would be in the present day city.

Stepping into my friend John’s apartment is like falling down the rabbit hole into Wonderland. Walls lined with books waiting to transport the unsuspecting to worlds of fantasy and the realms of imagination. At the very least to a step back into the past. In this case, the Amsterdam of 1969. The ‘Fun Lovers Guide to Surprising Amsterdam’* beckoned from the shelf. I was immediately hooked.

More than a restaurant/pub guide, the quirky little book provides snippets of history, personal stories about owners and is a veritable wealth of information. It got me thinking – could a 1969 guide have any value in modern-day Amsterdam? Did these places still exist and if so what were they like now? I resolved to find out, and for the next few days I could be found sitting in a brown cafe everyday around 4 pm.

Did I say 1969? In Amsterdam the eighteenth century is never far away, and stepping into a brown cafe is like being catapulted back in time. So called because of their dark interiors, and nicotene-stained walls, several date from the 1700’s, and have wooden floor boards (some with sawdust), dark wood furnishings, and a decor that looks like it could be original. Leaded glass windows, beamed ceilings, chandeliers, ornate breakfronts behind the bar.

Le Doktor is perhaps the smallest bar in town. As Tom Vincent (author FLG) says – not much bigger than a doctor’s office. The place is apparantly named Le Doktor because that’s what the Dutch call genever – the curer of all ills. The old gin pump stands at the end of the bar, but is now filled with water, and no longer works. Mr Vincent goes so far as to suggest that the first owner, in mid 1799, had an additional reason for christening his bar thus – men could tell their wives they were going to see the doctor when the thirst took them, and they wouldn’t be questioned. This tiny pub – with room for only seven bar stools and and four weeny tables – serves drinks that other bars have never heard of. I asked for ‘T Hempje Licht Op’. (Lift up your shirt). The owner rummaged through dusty bottles on the breakfront, pulling out several and cradling them in his arms. Eventually he found what he was looking for, right at the back, and told me – ‘this bottle is 70 years old’. Imagine – this very liqueur was sitting in the bar when Mr. Vincent wrote his book in 1969! Such drinks were considered to be medicinal and have remarkable curative powers due to a secret, special combination of herbs, bitters and spices. ‘T Hempje Licht Op’ was a stomach settler – the amber liquid warmed on the way down and I tasted oranges, coco, and vanilla – if only all medicines tasted this good.

But the undisputed king of liqueurs must be Wynand Fockink. This 300-year-old ‘proeflokaal’ or tasting house oozes atmosphere and tradition. A cosy place with soft copper light, tiled stone floors, creaking wooden stairs and myriad nooks and crannies. The old custom of bending over the wooden bar to take the first sip out of the fluted glass without picking it up is still observed. Ingrid, the bar lady shrieked in alarm – ‘what are you doing?’ – when a customer inadvertently lifted her glass to her lips, causing her to stutter – ‘sorry, sorry’. A man sitting on a low wooden stool in the corner murmered ‘that’s just not done’. I chatted to Paul, the distiller (he has a business card that states he’s an ‘alcoholist’) and asked him which liqueur he could recommend. ‘All eighty are good’ he said with an unassuming smile. Mmmm, I consulted the list to make a choice and went for ‘Bittere Lijdenstroost’ as much for the name as anything else. This liqueur is said to dissolve any kind of sorrow. Indeed after two glasses, it’s said that all the world’s problems will be solved forever! Famous clients such as  Winston Churchill, Field Marshall Montgomery, Chagall and Henry Moore, may have had this in mind – at least Wynand’s concoctions would have helped them forget everything for a while.

If it’s no-nonsense, salt-of-the-earth Amsterdammers that you want, try De Gouden Florijn. The de-rigueur wooden trappings and furnishings abound, here there are even carpets on the tables. A cigarette smoulders in an ashtray on the bar and everyone it seems has a cigarette clamped between their fingers. Behind the bar, one plaque proclaims ‘roken moet mogen’ (smoking must be permitted) and another ‘leve De Recessie’ (long live the recession). It’s just possible to read them through the clouds of smoke that hang in the air. Eight or so people congregate at the large round table at the front, and everytime someone comes in a shout goes up – and hands wave in the air when a customer leaves. This is a real neighbourhood pub. The barmaid strides up and down, handing out ‘vaasjes’, causing the floorboards to vibrate. A statue of Jesus stands guard over a basket of fresh oranges. Newspapers litter the tables at the back. No-one is alone. 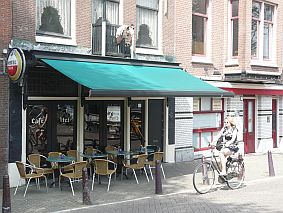 Close by, Het Bruine Paard  is also a ‘locals’ pub. The story runs that in the early days after this 400-year-old house became a pub, there was a fire station across the canal that depended on horses to get equipment to the fires. One of these horses became so attracted to the pub, and was so much more interested in hanging around there than going to fires, that they finally named the place after him. His likeness hangs outside the pub still, over the front door. Many of the old timers consider these bars as much a part of themselves as their own homes, an extension of their sitting rooms. They are solid, dependable, comfortable places, with the occasional nod to the twentieth century – a peanut dispenser, a telephone – just don’t expect a flat-screen TV.

Papeneiland is perhaps the most picturesque brown cafe. Large front windows frame views over the Prinsengracht and Brouwersgracht. I wondered how many had admired the view before me. Papeneiland is part of the fabric of the history of Amsterdam. In 1641 an itinerant coffin maker occupied the house. He often had time on his hands waiting for a job and sold drinks on the side to make ends meet. Eventually his side-line became more profitable than his main trade. This location has housed a place to drink ever since. And there’s more. During the Reformation many of Amsterdam’s catholics were not allowed to worship in the church across the canal, and spent their time in Papeneiland. The authorities were unaware of a tunnel running under the canal which allowed access to the church from the drinking house and allowed worshippers to conduct secret services. The tunnel entrance is still visible in the cellar, although has been long since bricked up. I fell into conversation with the cafe’s owner. He told me about a modern day piece of history – ex-president Clinton’s visit. ‘I thought the young woman was pulling my leg when she came in and asked if I would reserve a table for Bill Clinton; I told her no, we only have three tables, we’re not going to start making reservations’. But when several dark cars pulled up, and the bar was surrounded by security guards whispering into earpieces he realised there was something afoot. Clinton sat alone at the back of the bar, and drank coffee and ate apple pie. The regulars had been told to leave him alone. They couldn’t quite keep to it, clapping him on the shoulder as he was on his way out of the bar, telling him he should thank his host, and offering him a cigar. A framed (typed) letter from Clinton hangs at the back of the bar, telling how much he enjoyed the experience.

I sat looking around me, admiring the old stone floor, the high ceiling, the antique clock with it’s meter-long pendulum, the paintings. The paintings. I began to notice a strong resemblance between the owner and the subject of the painting behind me. I looked at him. I looked at the date on the canvas. I asked. His patrons, he told me, had given him the painting on his thirtieth anniversary in the pub. Gradually, the penny dropped. He’d owned and worked in Papeneiland for more than forty years. I consulted the FLG. It mentioned ‘the friendly owner – Tiel’. The man in the painting was also called Tiel. They were one and the same. I told him about my quest, and told him he was in my book. He laughed. He was almost a part of history himself.

When I started looking for the cafes in the book, I assumed they would all be gone, or converted into wine bars, changed beyond recognition. But they were still there, still exactly the same. A comforting thought that there are some constants in our modern world. If I’m still here, maybe I’ll have another look in forty years time.