Welcome to the Amazon rainforest, the world’s largest remaining tropical rainforest. 40% of all the earth fresh water flows through the Amazon basin. It supplies our planet with 20% of the oxygen, and plays a crucial role in many of our planet’s ecological cycles, for it helps in maintaining global rainfall and regulate climate pattern worldwide. The whole basin, which shares borders with 9 countries in South America, is about 90% of the size of the contiguous United States. The country of Ecuador has 2% share of the Amazon, but if you ventured to what is known as ‘the Oriente’, you could have unparalleled opportunities for experiencing the magic of the rain forest. Not only, does it have one of the world’s best infrastructure for rainforest tourism, but most destinations are accessible within a day’s journey from Quito, the capital.

I was traveling with my 14 years old son, Nicolas, and our destination was Yasuni National park, one of the most biologically diverse spot on earth. The park was designated a Unesco Biosphere Reserve in 1989, and overlaps ancestral Waorani (or Huaorani) territory. The Waorani once numbered in the tens of thousands and inhabited a much larger territory than today. They have been under constant attack from the threats of oil development and colonization, since the 1960’s. At least 2 groups, the Tagaeri-Taromenane, have continued to resist all contact with outsiders and live a semi-nomadic lifestyle in the forest. The Waorani have lived there since before written history and know the intricate rhythms of the forest’s fauna and flora, better than anyone. One could argue that they are the ancient keepers and guardians of the world’s biological heritage.

A team of scientists has documented, that Yasuni shatters world records for a wide array of plant and animal groups, from amphibians to trees and insects. 596 documented species of birds, 150 amphibian species, over 200 mammals including the Jaguar and Anaconda and 10 species of monkeys. In just a hectare (2.5 acres) of forest, 644 species of trees and shrubs have been found, and over 100,000 insects. To put things in perspective, that is nearly as many trees and shrubs species, in all of the United States and Canada, combined.

After a 45 minutes early flight from Quito, we landed in Coca. It was officially known as Puerto Francisco de Orellana, named for the Spanish explorer who first explored the Amazon, all the way to its mouth in the Atlantic, in 1542. Upon his return to Spain, he recounted tales of gold and cinnamon, and of encounters with tribes, led by mighty and powerful women, resembling the Amazons of Greek mythology. It is a comparison that is presumed to have led to its present name.

Coca is the last real civilization, before the ‘Rio Napo’ transports you deep into the rain forest, to Yasuni National park, and beyond. In 1990’s, the town was transformed from a small settlement on the river banks, with dirt roads and no infrastructure, to the capital of the oil industry in Ecuador.

To make our way to our final destination, the Napo Wildlife Center, we embarked on 2 hours motorized canoe ride down the Napo River. We could alternatively see small settlements on the river banks, and oil drilling sites, among the vast expanse of the jungle. The gas flares on the top of the wells, set the grey sky afire, beholders of Ecuador’s dependency on black gold. 50% of the country’s budget is funded by its oil earnings.

The exploration for crude oil has obviously created numerous environmental problems, for the rain forest and its indigenous tribes. There is however a new trend of ecotourism that seeks to maintain the natural environment of the forest. It focuses on education and conservation, while providing an income and unity for the local inhabitants.

It was time to transfer to a dugout canoe. Our 2 paddlers, both members of the Kichwa community, stirred the canoe rhythmically through the narrow and meandering creek. One of them, nicknamed ‘Eagle’s eyes’, for his insane ability to spot wildlife through the dense canopy, had a perpetual smile on his chiseled face, which betrayed his daily encounter with magic. There, under a timid sun that ventured occasionally out of the steady rain, our forest 101 education was to begin. We passed through several different ecosystems, through our 2 hours ride to the lodge. Our guide Peter, a laid back Quito native, with colorful tales to match his encyclopedic knowledge of the jungle, commented that all the rain from the last few months had flooded the creek. The water darkened gradually as we went on, shifting from shades of coffee and milk, to black cocoa. As the vegetation decays, tannins leach into the water like black tea leaves simmering in the slow currants. It makes the water very acidic, and the mosquitos prefer to go elsewhere, which was a good thing. We spotted 3 species of monkeys; spider monkeys, who like to roam the tree canopy, in bands of up to 35 individuals, using their disproportionally long tails to jump from tree to tree, reminiscent of acrobats in a Barnum Circus performance. A pretty rare Saki monkey, with its head hooded in fur, and a couple of golden-mantled tamarins, with their black heads and orange underparts matching the colors of the late afternoon sky. Birds were concocting a cacophony of sounds and turning them into a sweet symphony. 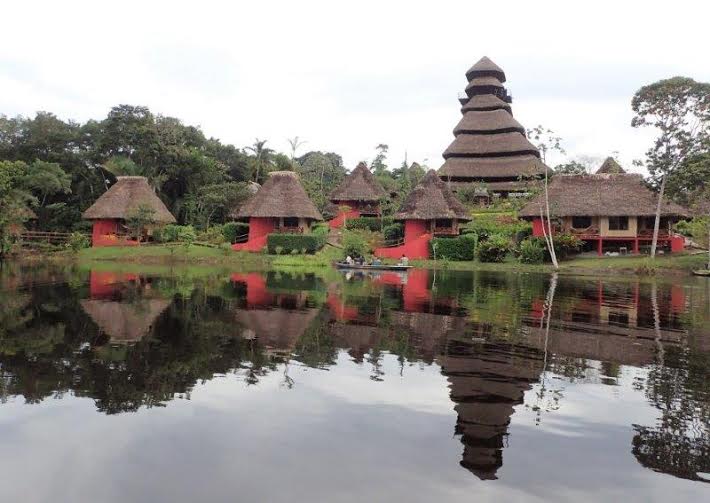 Finally, we entered a big lagoon, and the Napo Wildlife Center emerged on the distant shore, like fireflies glowing in the night. Built and run by the native indigenous of the Kichwa Añangu community, the lodge consists of 16 luxury cabins, with thatch roofs and private balconies. They are decorated with native furnishings, and they offer the discriminating tourist and the adventurers alike, maximum privacy and comfort, with an intimate view of the forest and the lake. Every effort has been made to minimize its impact on the 82 square miles of pristine rainforest, within its preserve. Solar panels supply the electricity, the waste water is treated before being released into the lake. Everything has been designed for minimum environmental impact.

The majority of the guests at the lodge come on a 3 or 4 night program, which includes transportation, lodging, all meals, and jungle activities with a bi-lingual guide. A visitor will never leave the Napo Wildlife Center, without a new found appreciation for the beautiful and simple people, yet full of grace and wisdom who inhabit this magical land.

The following morning, we canoed back to the shore of the Napo River, as the sun was still hiding below the forest canopy. Monkeys, birds, butterflies, and orchids were woven into this real life tapestry of scents, colors, and sounds, while the soft light wrapped the forest, with the blessing of a new day.

We were headed to the parrot clay licks. There are 2 clays licks, within Yasuni National Park, and there are the most accessible in the country. Many of the seeds and nuts found in the rainforest, contain toxins in them. The parrots, parakeets, and macaws come to the clays licks, in search of the clay’s great power as an antidote and antacid. That makes for a fascinating spectacle, as thousands of birds descend gradually from the highest trees, a few branches at the time, to the exposed area of clay caused by erosion. Wild pigs had been reported around the area that morning, consequently, the birds were less plentiful than normal, and most of the action was over the tree canopy.

In 1998, a group of members from the Kichwa Añangu, decided to build the Napo wildlife center, to attract guests to their lands, but more importantly, to embark on a journey of preservation and education. Since 2007, the community is in full control of the lodge, and the money earned from tourist projects, is reinvested in social and cultural projects, in addition to supplying the roughly 80 working members of the community, with sustenance and accountability.

We spent the rest of the afternoon at the Interpretive Center, downstream. There, the 24 residing women introduced us to ‘Sumak Kwasay’, an ancient Kichwa word that means a good way of living; a way of living in harmony, with each other and with nature. In their floral dresses, they demonstrated their music and dances, and we were all invited to join in. In a traditional house, with a round roof made of forest materials, such as bamboo, palm and banana leaves, and cemented with clay, we got a lesson about the making of a fire, and the different ways to store and preserve food. We sampled their staple drink, chicha, which is made from boiled yucca and is a white and sour concoction they consume with every single meal.

The next dawn, after a canoe ride through a man-made creek and a walk in the forest, we made our way the top of a tower, built 110 feet around a bi-centenarian kapok tree (or ceiba). A very sturdy iron tower was erected alongside the tree, and from the wooden platform on the top, we could feel in the diffused light that the world was indeed a sacred place. We stood, our group of 9 guests and our guide, transcended by the spectacle all around us. A tree canopy as far as the eyes could see; a flock of macaws flying in the distance, toucans resting above a near tree, with their oversized and colorful bill they use mainly as a feeding tool. A couple of black oropendolas perched on the highest branches, showing off their bright yellow tails. The ancient Maya of Central America believed that a giant ceiba tree stood at the center of the earth, connecting the terrestrial world to the spirit-world above. 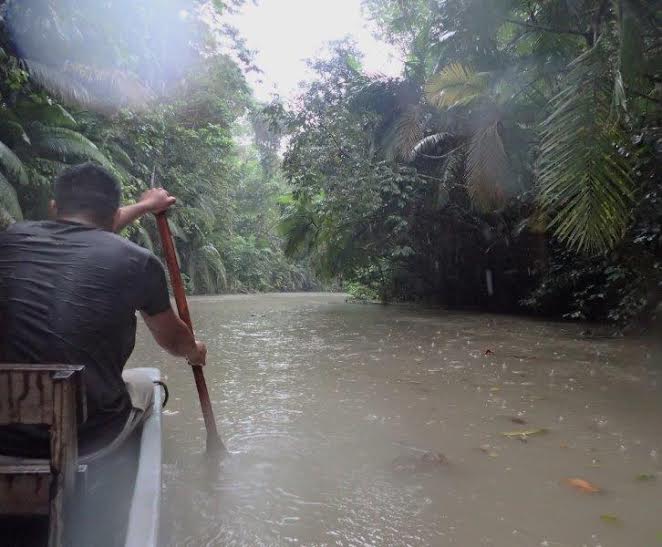 Rain started to fall and we went back to the lodge to feast on a wholesome lunch of fish, organic vegetables, and exotic fruits and take a well-deserved rest. When the rain finally stopped, we jumped in the canoe to get a closer look at the 5 river otters, residents of the lake who fish during the day and sleep at night. One female had a baby swimming on her back. Their diets consist of a diet of fish, mainly catfish but also small crabs and snakes. They play an important role in the mythology of the Achuar people, the indigenous tribe to the South West, where giant otters are seen as a ‘tsunki’, or water spirits; they are sort of water-people who feed on fish. Black caimans, related to the alligator and the crocodile, can reach up to 5 meters, and feed in contrast to the river otters, during the night.

One of the highlights of our stay, was a walk in the jungle at night, with flashlights and the ubiquitous rubber boots.

The forest takes a dimension of its own, once the sun sets. Every step becomes a treasure hunt for insects, frogs, and spiders. There is a perpetual hum in the background, a buzzing that arises from every direction, it seemed. A quarter moon, shining from atop the canopy, bathed the forest in subtle hues streaking down from the tall trees. Jaguars and ocelots were probably lurking in the background. 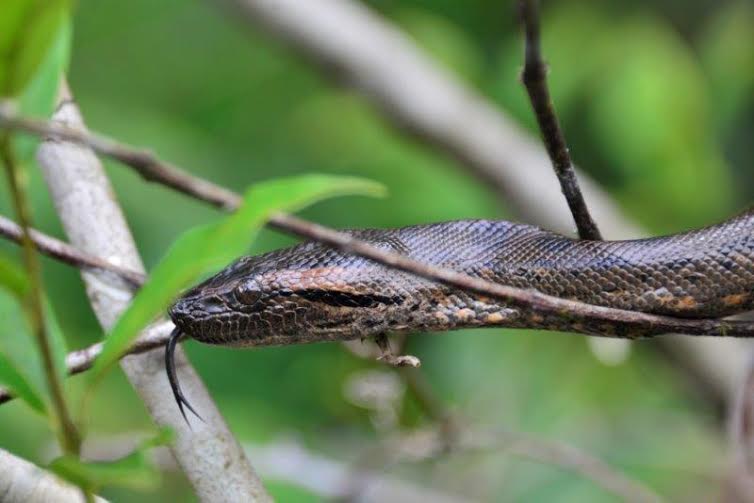 The Amazon rain forest is truly a pillar of life on earth. Yet, 20% has been destroyed and is gone forever. The land is being cleared for cattle ranches, mining operations, logging, and subsistence agriculture, and in the case of Yasuni national Park, oil exploration. Although 25% of pharmaceutical drugs are derived from rainforest ingredients, scientist have only tested 1% of tropical plants. Experts estimate that 130 species of plants, animals, and insects, are lost every day.

In spite of these gloomy facts, our hosts at the Napo wildlife center have erected a magnificent lodge, on the shores of Lake Añangu. It shines, like a lighthouse guarding a raging sea, as a beacon of hope, and a testament to the sanctity of life.