Along the western coast of Ireland, stretching the length of Counties Galway and Mayo, hides one of the country’s greatest kept secrets; Connemara. From the Twelve Bens Mountain range to the Roundstone Bog, this particular pearl shines without comparison. Being the birth place of countless fairy tales, a retreat for many artists, and a completely untouched haven for cattle grazing and herding, Connemara is the stuff dreams are made of. It’s as if every tall tale or common misconception about Ireland must have somehow stemmed from the deep valleys of Connemara, the “real emerald” of Ireland. Now that doesn’t mean there are regular scheduled leprechaun hunts, lucky charms growing on trees, or even my personal favourite, a tall dark and sexy glass of water with bulging muscles and a nice tan pacing up and down the road looking for a foreign damsel (if there was, I would have found him by now). But what it does mean is the grass is greener on this side with its layer upon layer of rolling hills and free roaming sheep. 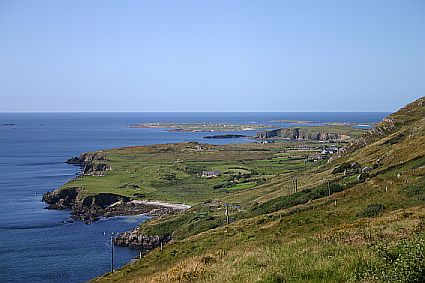 There are more pubs than churches that dot the dusty gravel road, and as indefinable as it always has been, there is a certain magic that rests among the many weaving streams and wild forests.Connemara is also home to a plethora of organic salmon farms, free range sheep, and of course, the Connemara pony. Going back to the 1500’s, little but butch Scandanavian ponies ran amuck through the rocky bogs of the region, tireless in their search for true love. Then, as if their prayers had been answered, they were
delivered the most studly of studs; the Spanish Armada horses. Unable to keep their composure, the little ponies threw themselves at the Spanish stallions in a fit of passion. And so what we’re left with after
that short but steamy affair is the Connemara pony. There’s much to be had in Connemara for those willing to welcome it. Although it’s rich in both culture and history, Connemara doesn’t cater to your typical tourist. So, go out on a limb, try something new, and open yourself to a whole different world. Like the Irish phrase goes, Cead mile failte, a hundred thousand. 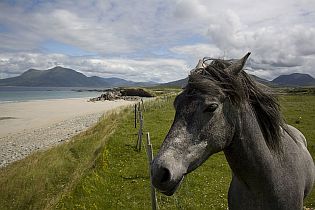