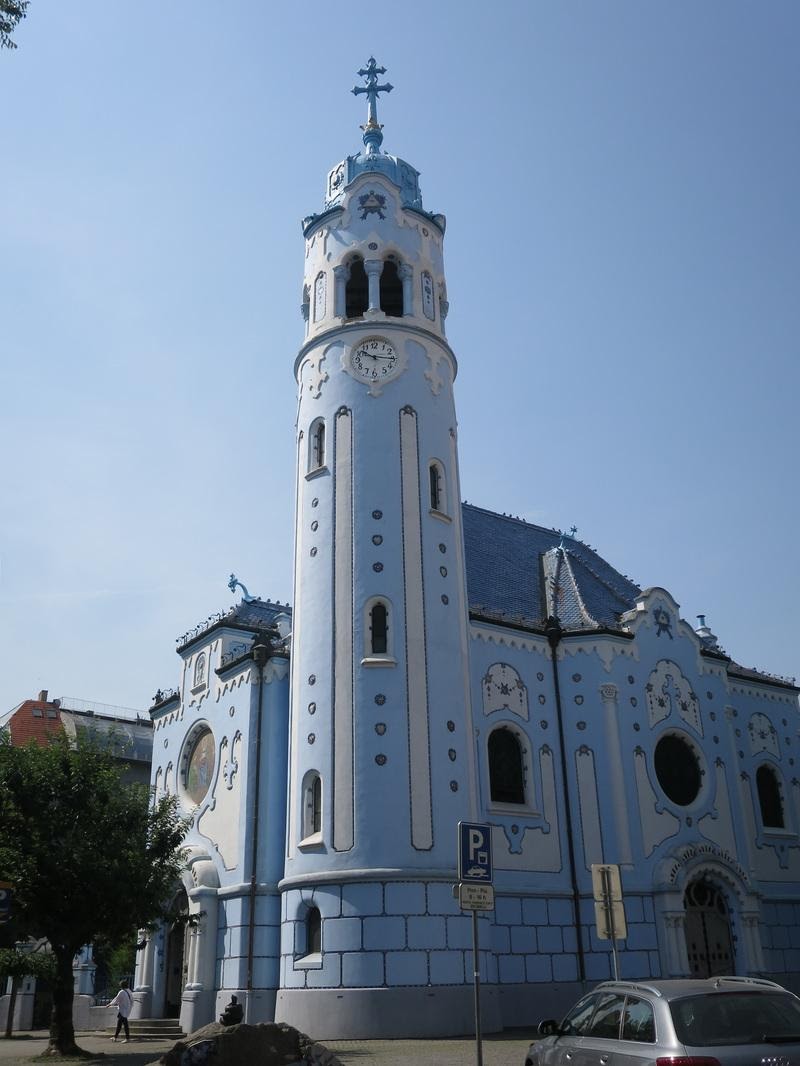 In the heart of Slovakia, lies the most charming and adorable little Roman Catholic church that is sure to bring a big smile to any visitor.  Known as “The Little Blue Church,” St. Elisabeth’s or as the locals call it, “Kostol svätej Alžbety“ is a small and unassuming building in the eastern part of the old town of the country’s capital city, Bratislava, whose charm draws regular visitors because of its unique aesthetics.

Struck by its calming, cool shades of blue on both its exterior and interior, I found myself unable to relent from taking photograph after photograph.  Each from a different angle, attempting to capture uncommon blue shade colorations and the detailed design and architectural elements discovered upon close inspection.  Interestingly, during my visit, the church was closed, and in spite of only being able to peer in through a set of exquisitely designed blue gates, my time at “The Little Blue Church” was in excess of an hour. Its beguiling character and unconventional appearance had me mesmerized.

Equally engaging are these five little known facts about this enchanting house of worship.

St. Elisabeth’s, which was built between 1907-1908 has come to be affectionately called, “The Little Blue Church” because of the color of its façade, mosaics, majolicas and blue-glazed roof.

The one-nave church was designed by Hungarian architect Ödön Lechner, who was best known for decorating his buildings with Zsolnay tile patterns inspired by old Magyar and Turkic folk art. The end result, visibly evident in this charming house of worship is a playful combination of Romanesque, Oriental and classical features, otherwise described as an excellent example of Hungarian Secession style, more commonly known as  Hungarian Art Nouveau style.

The roof is also adorned with glazed bricks with decorations giving it a whimsical feel. 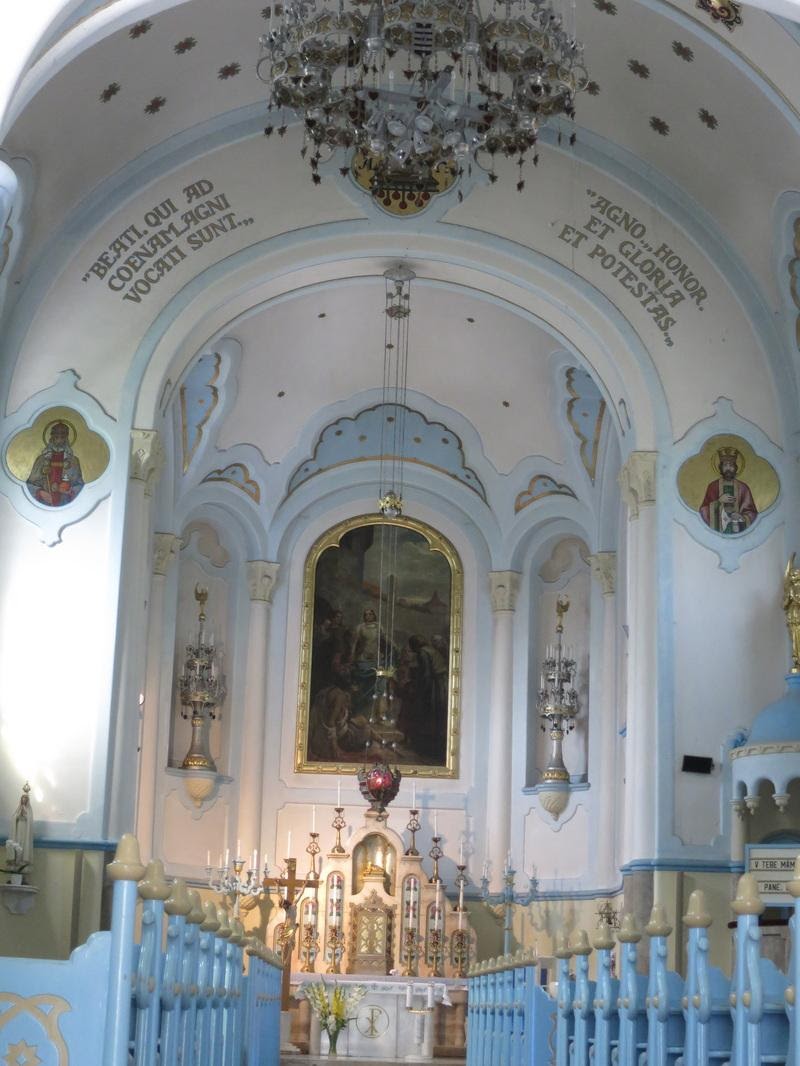 The interior of St. Elisabeth’s is a playful combination of sky blue, white and gold accents. © travelincousins.com

2. Consecrated to Saint Elisabeth of Hungary

The Blue Church is consecrated to St Elizabeth, Princess of Hungary, who was a native of Bratislava, best known for risking her rank by giving alms to the poor. Elisabeth was the daughter of Andrew II also known as Andrew of Jerusalem, who was King of Hungary and Croatia between 1205 and 1235.

The miracle of Elisabeth’s sainthood was that her gifts would turn into flowers during the times of people’s suffering. 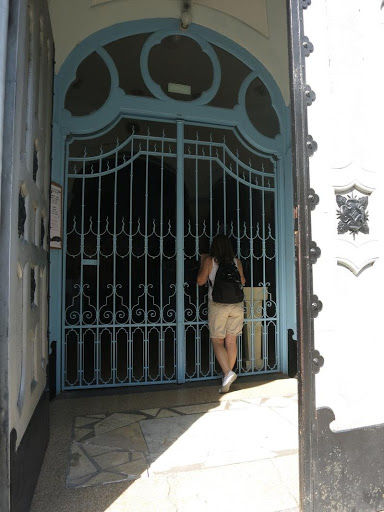 Be sure to be mindful of timing when visiting, especially if you are interested in going inside this charming church, as the hours are limited. You can only enter between 7:00 AM and 7:30 AM and then again between 5:30 PM and 7:00 PM. Otherwise, you will have to sneak a look inside the unique building by peering in through the exquisitely designed blue gates. 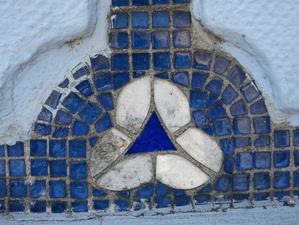 This enchanting building is an art nouveau gem, covered in 50 shades of blue covering the building’s exterior and interior. Featured on the outside of the building is a powder-blue clock tower standing a bit over 120 feet. Time can fly by quickly as the eye catching details of the dazzling blue glazed ceramic roof, decorated columns and exterior walls are captivating with their craftsmanship and color.

Although today both the interior and exterior of the church are painted in shades of pale blue and decorated with blue majolica, interestingly, the façade was originally painted in light pastels. When it was later changed to its current blue, St. Elisabeth’s was given it’s unofficial nickname of “The Little Blue Church.” 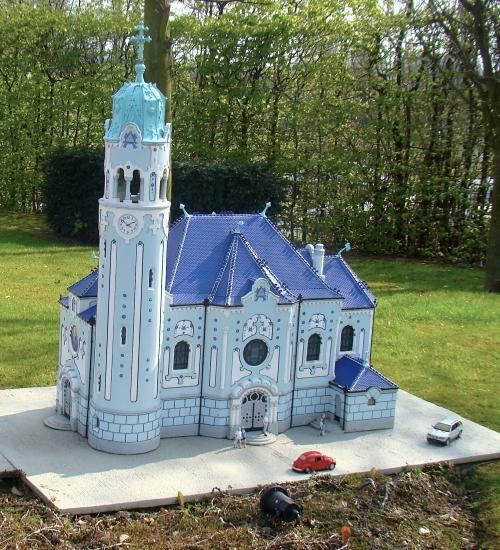 If you visit Brussels before you get to Bratislava, don’t miss Mini-Europe, the miniature park located in Bruparck.  Situated at the foot of the Atomium in Brussels, this petite park has reproductions of 350 buildings and monuments on a scale of 1:25 from roughly 80 cities in the European Union.  Representing Slovakia is a model of the St. Elisabeth’s Church. 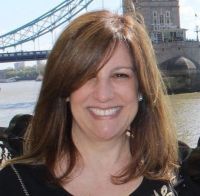 Elisa is an award-winning blogger, freelance writer and public speaker. She is co-founder of TravelinCousins.com and her personal blog, The Buzz. Elisa has a weekly travel and lifestyle column in ThisIsTheBronX.info.